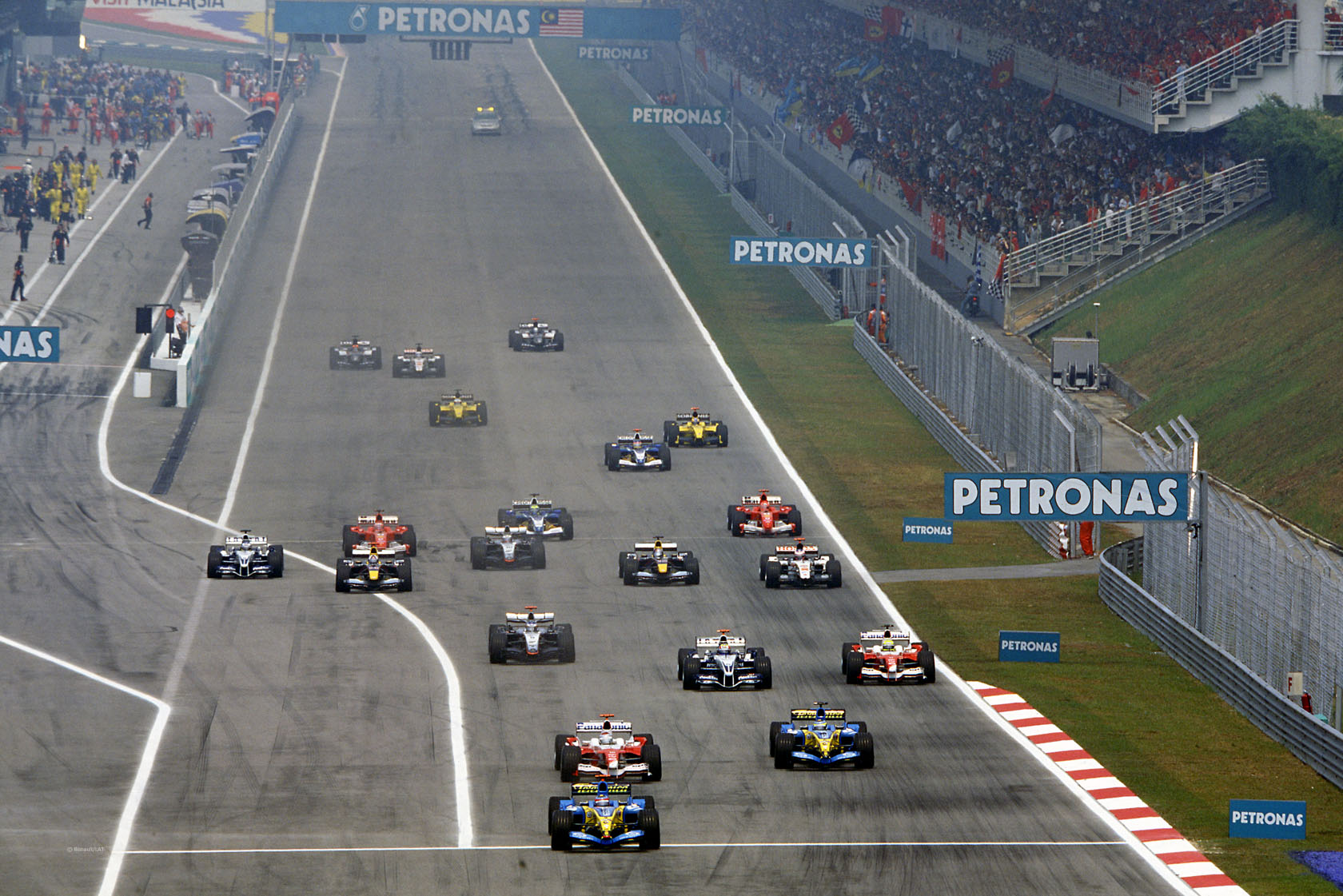 Fernando Alonso staked a claim to the 2005 world championship with a crushing display in the Malaysian heat, while Michael Schumacher could only manage seventh as Ferrari’s poor start to its title defence continued.

Alonso never looked like being headed in Malaysia. The storm clouds stayed away this time and we had our first taste of ‘normal’ aggregate qualifying, 2005-style. Alonso was fastest in both sessions but team mate Giancarlo Fisichella lost out to Toyota’s Jarno Trulli, who took the same second place he had in Australia but this time entirely on merit.

The Toyota was still there come the end of the race as well, which was more of a surprise. Having slumped to ninth in Australia the paddock had made the assumption that Toyota had produced another turkey of a car, but even despite the sweltering heat Trulli protected his tyres to the end and gave the Cologne team their first F1 podium. Team mate Ralf Schumacher took fifth.

Toyota’s surprisingly good performance was in marked contrast to Ferrari, who suffered a dismal weekend. Schumacher came in seventh after a wholly indifferent race and Rubens Barrichello, second in Australia, retired a healthy F2004-M with seven laps to go, from 11th place. He had inexplicably chosen the softer Bridgestone compound in spite of track temperatures in excess of 50C degrees centrigrade, and his grooves were so worn after 49 laps he may well have faced disqualification if he had finished the race.

Australian Grand Prix winner Fisichella failed to add to his points tally and so lost the championship lead to Alonso. Running third in the early stages he never appeared comfortable with his car’s balance and changes made at his first pit stop appeared to make no difference. At first he slipped back into the clutches of Mark Webber, Ralf Schumacher and Nick Heidfeld. This prompted a sudden battle between the three as Webber was held up and Schumacher tried to capitalise. Schumacher lost the initiative, and dropped behind Heidfeld.

The next time around it was all over for Fisichella and Webber. Webber drafted past Fisichella on the back straight out of Sunway Lagoon corner, but Fisichella came back at him down the inside. Fisichella out-braked himself and thumped into the Williams, tipping both out of the race. It was an unnecessary accident that either driver could have avoided. Had Webber been watching at the same corner on lap 40 he would have seen Kimi Raikkonen stay wide, letting Felipe Massa run past the corner, and take the position. Nonetheless the stewards saw Fisichella as the culprit and saw fit to formally warn him after the race.

Raikkonen had a disappointing race. Having sacrificed grid position by fuelling heavily he was beginning to make an impression on the race when, immediately after his first stop, his rear left tyre disintegrated and pitched him across the grass at Genting curve, forcing him to drag the shredded carcass of his tyre back to the pits. He recovered to finish ninth, just seven-tenths of a second away from a points finish. Team mate Juan-Pablo Montoya had an uncharacteristically quiet drive to fourth.

Behind him came the second Toyota and the two Red Bull cars, both in the points again, and sandwiching a thoroughly unimpressed Michael Schumacher. He had qualified only 13th, four seconds off pole over the two laps, making Ross Brawn’s assertion that the 2004 car will be one second per lap faster seem not quite so bold. Regardless of any reliability concerns Schumacher will be pushing for the arrival of the F2005 at round three in Bahrain, because if it hadn’t been for the Webber-Fisichella crash he would not have scored points today.

Through all of this, Alonso cranked out lap after lap at a consistent and red-hot pace, as is his trademark. He left no-one in any doubt that on this day he was vastly quicker than the rest of the field, and Fisichella in particular. This was Alonso pointing out who he feels should have won in Australia, a potential win it’s clear he feels cheated out of. As he crossed the line, in spite of his exhaustion, he was in bullish mood. “You are the best,” he told his team over the radio. “We’ll show everyone.”