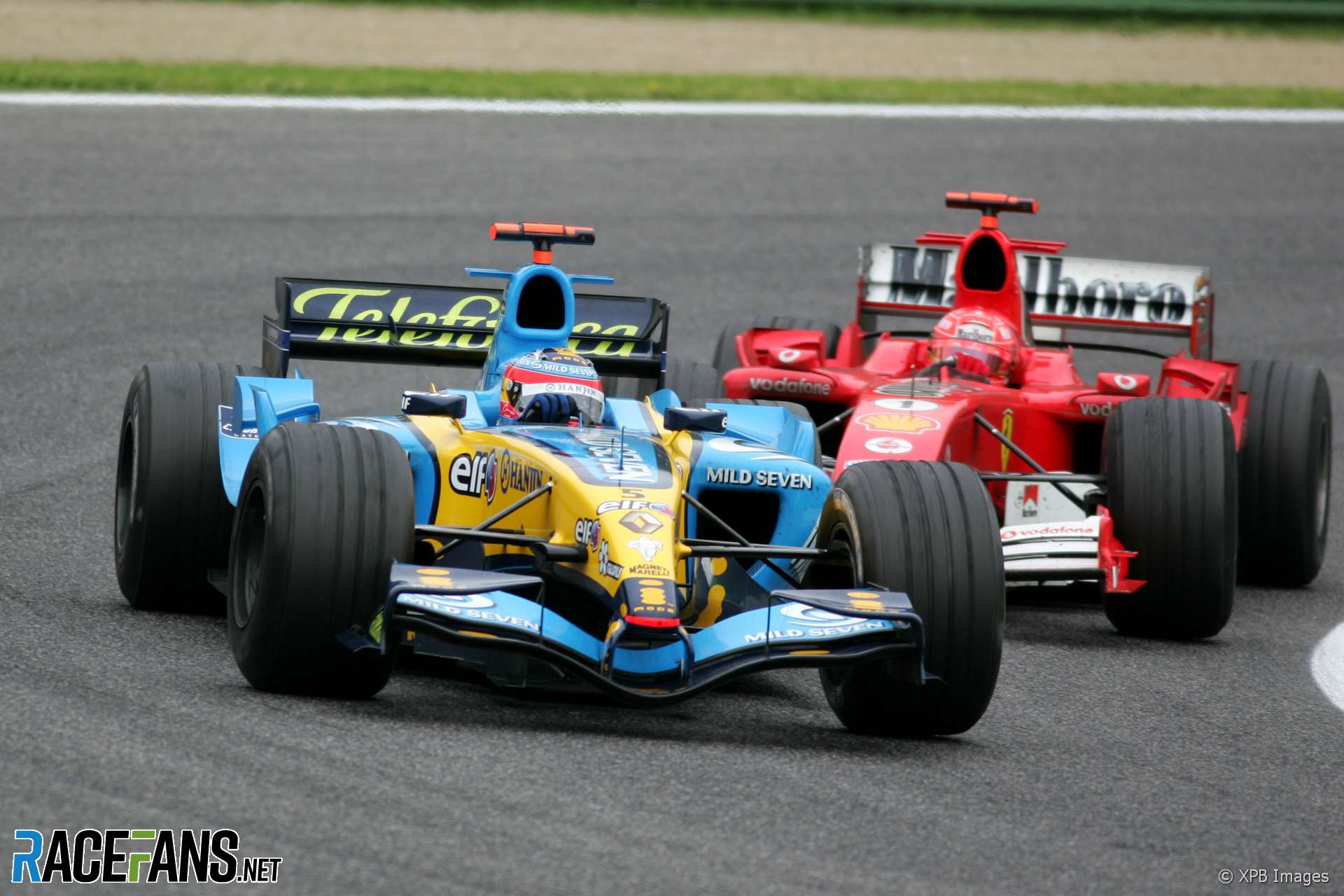 The San Marino Grand Prix may have been Fernando Alonso’s third win this year, but it was also a warning the he will not have an easy run to the title. Kimi Raikkonen made the early running, and Michael Schumacher came from nowhere to almost snatch victory from Renault.

After first qualifying it was clear the race was going to be about those three drivers: Alonso, Raikkonen and Schumacher. Giancarlo Fisichella again floundered for Renault, making an unforced error on his first qualifying lap. Alex Wurz, substituting for Juan Pablo Montoya, did extremely well to convert a poor running slot into a provisional eighth. Jenson Button’s BAR was the surprise package, provisionally fifth on the grid.

Many discounted Michael Schumacher after a mistake a Rivazza dropped him to 13th on the final grid. With Rubens Barrichello tenth, this was Ferrari’s worst qualifying at Imola since the track hosted the Italian Grand Prix in 1980.

Raikkonen extended his meagre 0.003s advantage over Alonso to 0.558s, leading to intense speculation that McLaren were running Raikkonen light to secure a good grid position. Button jumped Webber to take third, and Jarno Trulli yet again put significant distance between himself and Toyota team mate Ralf Schumacher – the two starting fifth and tenth respectively (the younger Schumacher was also promoted by Felipe Massa, who dropped ten places from eighth due to an engine change.)

If Raikkonen was fuelled light, contrary to typical McLaren strategy, it was all in vain. from the start he scorched off into a two second lead after just one lap and was slowly extending his advantage over Alonso when his driveshaft failed. The fact that it was only the first time McLaren had suffered a mechanically-induced retirement so far this season was no comfort whatsoever. His Malaysian race had been ruined by a tyre valve failure and this has seriously compromised his championship aspirations.

Alonso thus resumed the lead with a brief gap to Button and a further gap to Trulli. But behind Trulli was a minor traffic jam of Webber, Takuma Sato, Wurz, Jacques Villeneuve (finally enjoying some fortune at Sauber) and Barrichello. Webber had lost out to Trulli and Sato off the grid, but cleverly re-passed the Japanese around the outside of Tosa and Piratella. Where Schumacher the year before ran Montoya clean off the circuit at the same place, Sato was perhaps a bit too generous to Webber this year. He made up for it, though, with a smart, opportunistic pass as the pit stops began.

As the leaders bustled in and outs of the pits and generally made very little progress in terms of passing each other, Wurz and Schumacher remained out significantly longer. Button had briefly made inroads in Alonso’s lead with a couple of fastest laps but it proved only a temporary turn of speed in the run-up to his first stop. Schumacher had the real pace and finally unleashed the dormant potential of the F2005 with a series of red-hot laps. When he finally pitted he emerged an amazing third – from running twelfth.

Meanwhile there had been a fair bit of action among the lower placed drivers, not least Sauber’s Felipe Massa. He made two attempts at passing David Coulthard’s Red Bull at Rivazza – first he lunged from too far back and succeeded only in chopping the front wing from his Sauber. Then, trying again from too far back, he thumped into the side of Coulthard’s car and pushed him off the circuit – a move that should not have gone unpunished. No-one wants to discourage overtaking in Formula One, but allowing drivers to barge into one another in open-wheeled cars is unwise.

Schumacher now set about attacking the gap between himself and Button and completely decimated the Briton’s advantage at a rate of up to two seconds per lap. He finally caught Jenson with a few laps to go before the final round of pit stops, and looked to be stuck there, unable or unwilling to risk a pass. On lap 45, however, fortune smiled upon him. Button made a small error at Acqua Minerali and inexplicably failed to defend at the Variante Alta chicane – Schumacher simply breezed past and, with Alonso pitting, into the lead of a race for the first time this year.

It was around this time viewers in Britain were distracted by broadcaster ITV’s unusual (to say the least) timing of advert breaks – but more on that elsewhere.

Schumacher made his final stop on lap 49 and emerged just 1.5s behind Alonso. Again, Schumacher had vastly more speed than Alonso, perhaps even more than that offered by the new Ferrari as Alonso was running his Renault engine at reduced revs after a problem had been discovered with it in practice.

For twelve gripping laps Schumacher hounded Alonso without mercy. At one point he was able to draw alongside as they dropped from Piratella to Acque Minerali, but had no space to pass. Relentless though Schumacher’s challenge was, it seemed to lack the clinical aggression we have seen from him in the past. Schumacher did not try to lure Alonso into compromising defensive moves. Alonso, to his credit, held Schumacher back with an admirable resilience too rarely seen in Schumacher’s rivals.

They crossed the line just 0.215s of a second apart – the closest real racing finish we’ve seen for years. But this was a serious wake-up for Alonso and Renault: Ferrari are back in a big way. They will also have drawn serious concern from Fisichella’s second consecutive retirement due to mechanical failure, as collapsed rear left suspension pitched him into the Tamburello wall early on. Ferrari also failed to get both cars to the finish for a second race running; but, significantly, it was the important one that made it this time.

Button finally gave BAR a much-needed podium backed up by fifth for Sato, sandwiching Wurz who drove a quietly understated but faultless race to fourth. The Williams drivers fared poorly – Heidfeld an unspectacular eighth and Mark Webber, hoping for a podium from fourth on the grid, floundered to ninth. Villeneuve, cruelly denied a points finished in Bahrain, delivered a solid sixth for Sauber and you can only hope that this marks the beginnings of better times for the 1997 champ. Trulli was seventh, and Ralf Schumacher lost eighth after officials slapped him with a 25s penalty post-race for an alleged ‘unsafe incident’ involving Heidfeld. Toyota have announced their intention to appeal.

With a rejuvenated Schumacher and a fired-up Raikkonen chasing him down, Alonso is under maximum pressure just as the F1 circus brings us to a sold-out Barcelona circuit in two weeks’ time. If Schumacher can qualify well and has the same awesome race speed at his disposal again, it will require an even more incredible effort than we saw from Alonso at the end of this race to win the next one.

5 comments on “Alonso holds Schumacher back to claim narrow win”