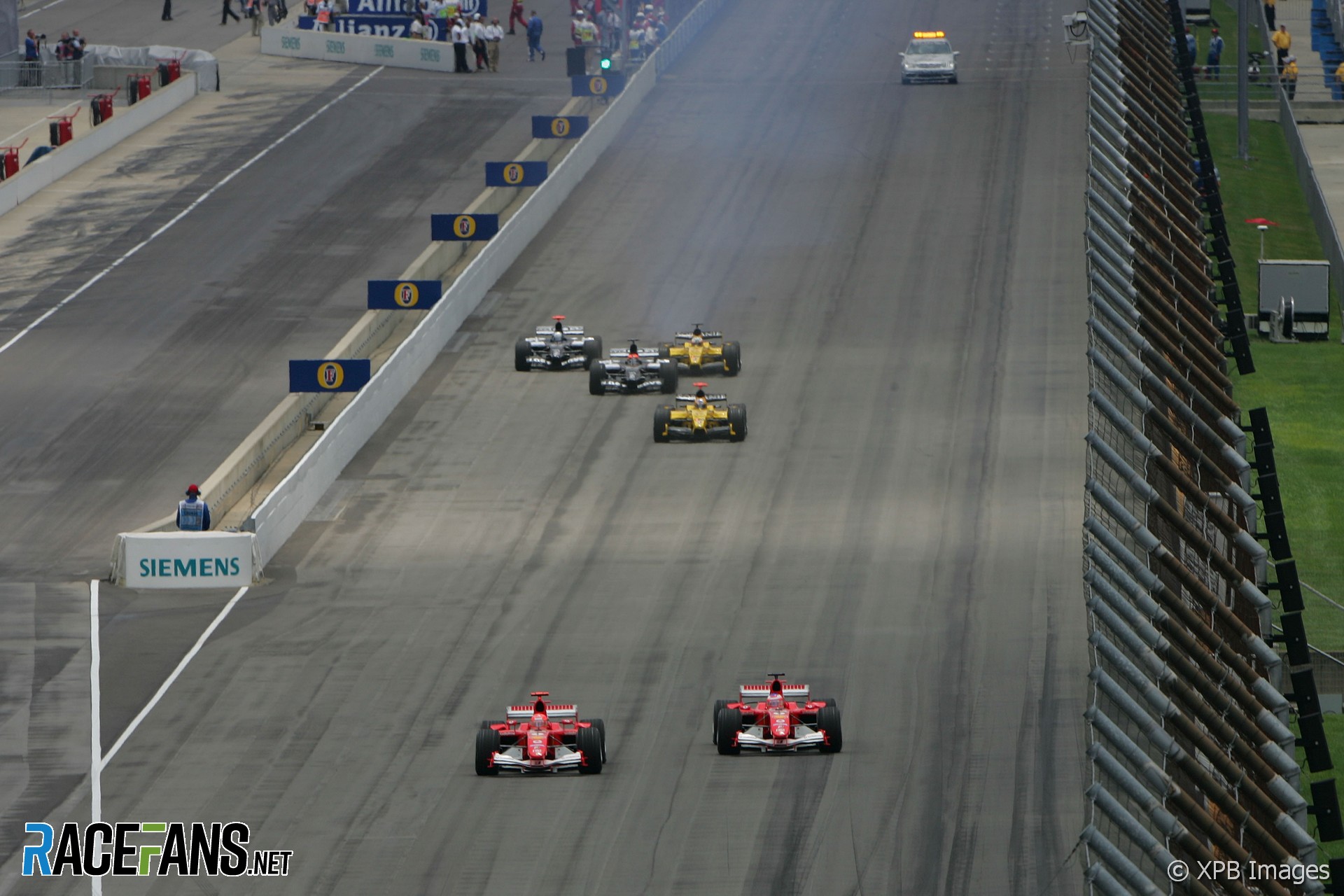 The political strife that has dogged the 2005 season behind the scenes finally boiled over onto the track, leaving the US Grand Prix an unedifying farce that may have caused terminal damage to F1’s reputation in the USA.

When Ralf Schumacher’s Toyota slammed into the Steel And Foam Energy Reduction (SAFER) barrier at the height of turn 13 on Friday morning, the paddock winced at the scale of the shunt and the untimely coincidence of Schumacher crashing so soon at the corner where he injured his back last year.

Overnight the consequences of the incident proved serious. Schumacher, who suffered a powerful impact, was forced out of the race to recuperate while Ricardo Zonta took his place.

Michelin, meanwhile, revealed major concerns about their tyres. They could not pinpoint the exact cause of the failure, which had also caused a blow-out on Zonta’s car and been observed by all the other Michelin teams – up to eleven separate tyre failures, in all.

For Saturday morning the Michelin teams were ordered to run the tyres at higher pressures, so they would flex less. While Jarno Trulli took pole for Toyota – their first ever – it soon became clear that Michelin were not able to guarantee that their tyres could safely complete a race distance. The cause was a manufacturing error and not a consequence of producing an overly soft compound to guarantee race pace. Schumacher’s failure occurred on only his first flying lap.

When the impossibility of running on Michelin rubber became clear, the sides in the dispute over how to proceed immediately crystallised around the ‘Group of Nine’ versus Ferrari, who have been at loggerheads since October 2004.

It soon became apparent that neither side would countenance giving any ground to their rivals. What was needed was a rigid, decisive governing body that could identify a mutually agreeable solution.

But, from the FIA, nothing, bar a firm rejection of any solution the ‘Group of Nine’ teams put forward – even solutions that would allow all the Bridgestone teams to start from the front and prevent Michelin teams from scoring points, provided a chicane was installed.

The outcome was thus effectively decided on Sunday morning; but only after hours of frenzied, tense meetings (which, apparently, Ferrari declined to join) did the reality of the situation dawn.

It came when every Michelin driver, to a man, declined to take the start. This left a preposterous six-car grid. The fans booed and jeered, and later even threw bottles on the track, but not even this was enough to postpone the excruciatingly embarrassing farce that was this ‘race’.

Michelin were entirely responsible for the tyre failures: there can be no dispute about that. Even though the problem was a simple manufacturing fault rather than a consequence of too radical a tyre, a mistake was made, and it was theirs.

But for there being no race, the blame rests entirely with the FIA. This demands at the very least an apology from those in charge of the sport.

Of course Ferrari were going to turn down every Michelin proposal. This is why Formula One needs strong, accountable management in place to take charge and prevent crises such as these from descending into farces the like of which we have just witnessed, which jeopardise the integrity of Formula One. Fellow Bridgestone users Jordan and Minardi joined them.

On the grid, ITV commentator and ex-driver Martin Brundle pounced on Bernie Ecclestone and became the effective chair of a media storm around him. Ecclestone, who would ordinarily breeze about with an indifferent air and set everything right, was today completely impotent.

In the event, Michael Schumacher took an inevitable win, Rubens Barrichello throwing the lead away after a pit stop problem had contrived to give it to him. Whether this was real or an orchestrated show, hardly anyone cared.

Jordan’s Tiago Monteiro collected third. The scenes of him celebrating while the spectators who hadn’t left booed and whistled hammered home just how far detached from reality the race had become.

The F1 community will hit the ground hard as the press justifiably tears this pathetic disgrace of an event to shreds.