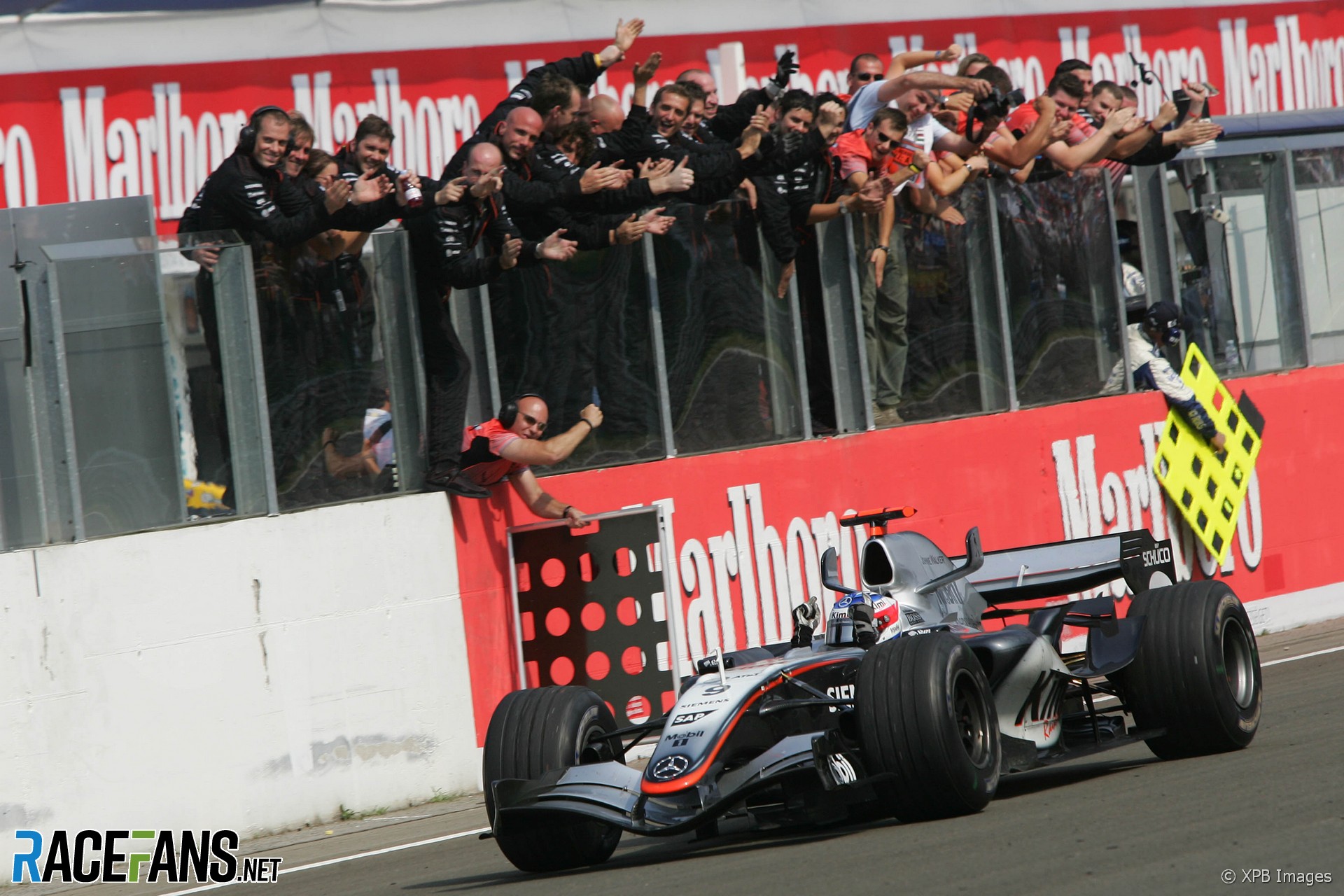 Kimi Raikkonen was finally graced with some good fortune at the Hungaroring and claimed his fourth win of the season while title rival Fernando Alonso suffered a first-lap collision and could only finish a point-less eleventh.

The main story of qualifying was been Michael Schumacher’s low fuel and soft tyre-aided glory run to his a 64th career pole, putting him one short of the great Ayrton Senna’s record. But the real interest was the Raikkonen-Alonso championship battle.

Raikkonen, cursed with running first on the dusty and so fuelled even lighter than Schumacher, posted the fourth quickest time of the afternoon. Alonso, for once struggling in an ill-balanced R25, slid wide at the final corner and would start sixth.

This set up a perfectly poised startline intrigue. Just how light was Schumacher? Would second-placed Juan Pablo Montoya have another of his infamous run-ins with the German? And could Raikkonen clear the third-placed Toyota road block of Jarno Trulli?

Montoya did not attack Schumacher – instead he made an indifferent start but squeezed Trulli out in a smartly choreographed move which allowed the lighter Raikkonen past. Further back Alonso nudged Ralf Schumacher and detached his nose cone.

But Alonso’s dilemma went unnoticed at first as Christian Klien was pitched into a dramatic barrel-roll by Jacques Villeneuve. Klien was unharmed and landed well clear of the racing line, meaning a safety car period was not necessary.

Raikkonen moved past Montoya later on the first lap just as Alonso’s front wing finally broke free, landing to the path of David Coulthard’s Red Bull. Coulthard’s car struck the debris with explosive force, shattering the front suspension and throwing him off the circuit. Scratch both Red Bulls after less than one tour.

While Alonso, Rubens Barrichello and Tiago Monteiro staggered into the pits for various repairs, Michael Schumacher and Raikkonen made good their escape, dropping Montoya at nearly a second a lap. Raikkonen was clearly quicker than Schumacher and pitted as early as lap 12.

Next in was Trulli on lap 14 and Schumacher two laps after that – all three clearly planning to make three stops. This gifted the lead to two-stopping Montoya. Meanwhile Barrichello was getting stuck into his recovery drive and made his way past Narain Karthikeyan at the hairpin as Alonso bore down on them both.

Montoya had accrued a 21s advantage over Schumacher by the time of his first stop on lap 23. McLaren gave him a substantial fuel load for his second stint, presumably to keep him from coming out of the pits between Schumacher and Raikkonen.

On lap 26 Barrichello slid wide at the final corner and lost position to Giancarlo Fisichella, who was suffering another dismal race, but kept Alonso behind. Alonso made his second stop two laps later. He resumed in a lowly 14th, by now more mindful of optimising his qualifying position at Turkey in three week’s time than risking all for a low points finish.

By now Raikkonen was all over the back of Schumacher who was clearly struggling with his softer tyres as at Hockenheim. McLaren had at least got five more laps’ worth of fuel into Raikkonen’s car than Schumacher had at his stop, so when Schumacher stopped on lap 37 Raikkonen eked out one extra tour, posted two of the fastest sector times of the race thus far, short-fuelled on the pit stop, and got back out ahead of Schumacher.

This was all intriguing stuff but once again in 2005 there was a patent lack of actual overtaking. This was not solely the fault of the circuit, although it could hardly have been designed to better force cars to remain line astern. Once again the peculiarities of the aerodynamic regulations were keeping cars from following each other closeenough to overtake.

Raikkonen began cutting into Montoya’s lead, but just as the spectators were wondering whether the McLaren cars would swap places before the end, Montoya’s MP4-20 slowed dramatically at the turn six chicane on lap 41 and Raikkonen flashed past. Yet another McLaren failure – this time a differential – had robbed them of a likely one-two finish.

While worrying about the durability of his own car, Raikkonen could at least take solace from Renault’s dire race. Alonso was still yet to break into the top ten and, on lap 44, Fisichella ran wide at the quick turn four and bounced through the gravel, losing another position to Mark Webber’s Williams. He, like Raikkonen, had run early in qualifying, but chose the alternative approach of brimming the car with fuel and running a mammoth 30-lap first stint.

In the closing stages Schumacher again found his Ferrari struggling for grip and slipped back into the clutches of his pursuing brother. Ralf was on course for his badly-needed first podium finish for Toyota as team mate Trulli languished with a damaged diffuser.

Raikkonen crossed the line after 70 laps to take an exceptional victory, given his disadvantaged start to the weekend. Team mate Montoya felt justifiably robbed by his bad luck – but whatever you may say against McLaren at least their mechanical failures strike each driver more or less equally, unlike at Renault, where it seems Fisichella has a monopoly on misfortune.

The Schumacher brothers were on the podium together ahead of Trulli and Button, the latter ruing his choice of hard compound Michelins. Heidfeld and Webber took five points for Williams and Sato finally won his first point of the season.

His Hungarian Grand Prix win was a shot in the arm for Raikkonen and his hopes of becoming champion in 2005. Not only did Alonso fail to score, but Ferrari’s form would suggest that they may inadvertently aid Raikkonen in coming rounds by finishing ahead of Alonso.

Not that Schumacher will see it this way – he is only six points adrift of Raikkonen, and still not to be discounted.