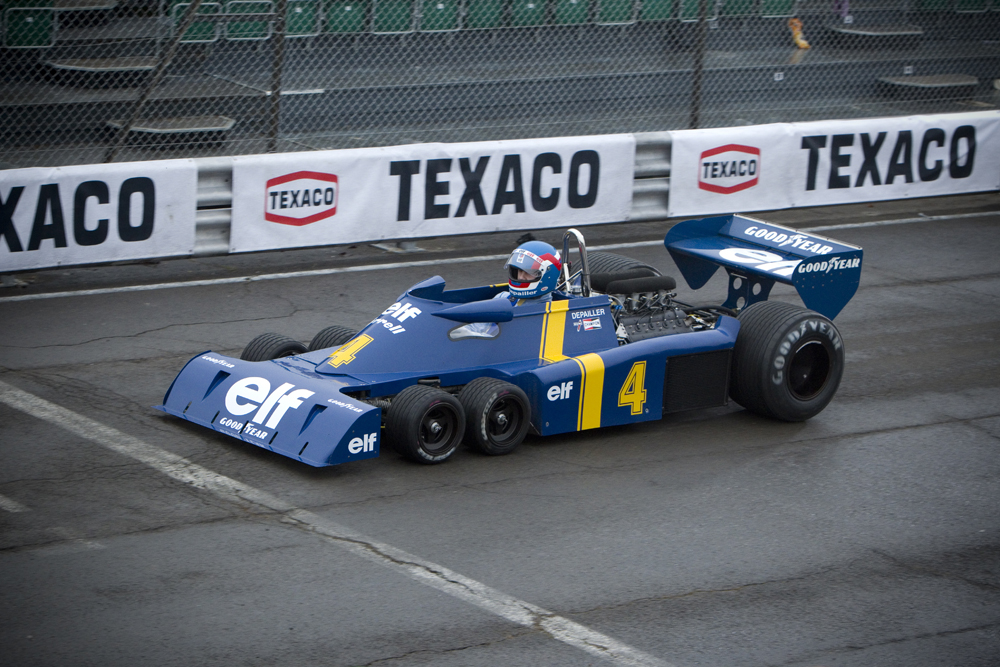 Power? Drag? Advertising space? No – F1 cars need more wheels. Six of them, to be precise.

At least four different teams experimented with the idea within a few years of each other, and they succeeded in producing some of the most hideous F1 cars ever seen.

A laughing stock to begin with, the final iteration of six-wheeled cars proved the concept had tremendous potential – before it was banned.

Just before the launch of the Tyrrell P34 in 1976, team boss Ken Tyrrell let venerable F1 journalist Denis Jenkinson in early for a sneak peek. On first sight of the car Jenkinson declared, “Right – I think I’d better go out and come back in again.”

Three years after Tyrrell’s last championship win designer Derek Gardner was grappling with the problem of reducing the car’s drag to get as much speed from it as possible. Having exhausted conventional solutions, he turned to the realm of the truly weird.

It wasn’t ready for the start of the season and the team made do with the 007 chassis in the meantime. Patrick Depailler raced the first P34 at round four in Jarama, Spain.

Three rounds later Jody Scheckter gave the car its one and only win at Anderstorp, Sweden. But the South African driver was not keen on the car and left the team at the end of the year.

Tyrrell plugged on with the P34 for another year before retiring it. But the concept didn’t die.

March were the next team to give six wheels a try, but opted for the more logical solution of putting the four wheels at the back and having them all driven for greater traction. At least, it would have done, had the 2-4-0 chassis ever raced.

Ferrari also experimented with six wheels – placing four rear wheels on the rear axles of its 312 in 1977, creating the 312T6. This idea had its roots in the pre-WWII Auto Union Bergrennwagen.

The Ferrari, like the March, never raced. Some wilder rumours even suggest they dallied with the concept of an eight-wheeler…

The final team to experiment with a six-wheeler were Williams. But when the governing body got wind of the performance advantage Williams had unlocked the technology was quickly banned.

Williams originally designed the car to make the most out of ground effect aerodynamics which employed skirts down the sides of the cars, touching the ground, to create a vacuum under the car at speed and generate enormous grip.

With a six-wheeled chassis front wheel-width tyres could be used at the rear, allowing the skirts to be extended along the full length of the car, creating even more grip.

Williams found an unexpected feature of the six-wheeled design. In wet conditions slick tyres could be used on the rearmost axle because the road those wheels were running on was swept sufficiently clear of water by the tyres in front.

The governing body also took steps to ban the six-wheeled innovation. Not only was four-wheel drive banned for 1983, but cars were soon after limited to only four wheels as well.

Williams’ engineers had a fleeting glimpse of the kinds of extreme performance that modern F1 cars could have if the rules were less restrictive.

Postscript: While researching the above article I found an image of a car that reportedly raced in the 1957 Indianapolis 500, a world championship event at the time. The car is another six wheeler with four wheels at the rear. It was called the Kurtis Kraft-Offenhauser 500G “Pat Clancy Special” (reference – external), driven by Jack Turner.

As I wasn’t able to find any corroborating material about the above car I did not include it in the piece, but if anyone has any information about it I’d be fascinated to learn.