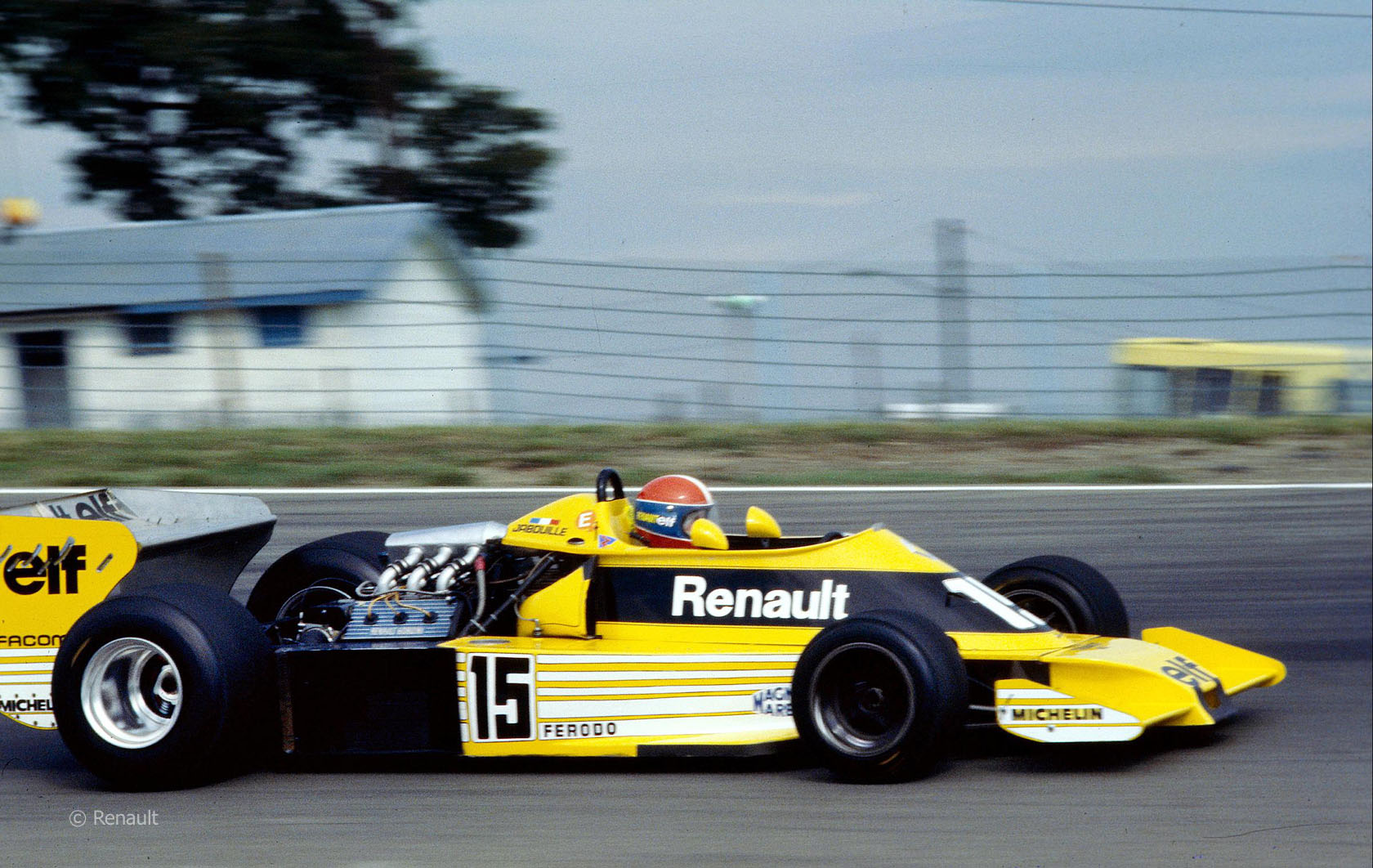 A previous edition of Banned looked at the gas turbine engine and the many flaws which prevented from being a competitive prospect in F1 racing.

But who can say those flaws might not eventually have been rectified had it spent more time in the laboratory of high-tech car development that is Formula One?

For one example of an F1 engine technology that was dismissed at first, went through a difficult gestation, and then became ubiquitous, look no further than the turbo engines that defined F1 racing in the 1980s.

In May 1977 Renault revealed its first ever Formula One car, the RS01. It boasted two distinctive innovations: One was its radial tyres developed with Michelin. The other was its engine – a 1,492cc V6 turbo – the first of its kind in Formula One.

The single car outfit made an inauspicious Grand Prix debut in Britain that year. Jean Pierre Jabouille qualified the car 21st on the flat-out sweeps of Silverstone, a circuit virtually tailor made for turbos. After just 12 laps its inlet manifold cracked, and once that was repaired it managed another five before the turbo broke.

Few outside Renault were convinced of the potential of the ‘Yellow Teapot’. But the French team persevered. It took them two years to win a Grand Prix, at Dijon in France in 1979. But if the promise of turbocharging was becoming apparent to them, Renault’s rivals were beginning to realise it would take a long time to catch up.

Ferrari were the next team to jump on the turbo bandwagon – their first turbo car arriving in 1981. Gilles Villeneuve hustled the ungainly beast to a pair of unlikely victories at the twisty Monte-Carlo and Jarama circuits.

The chief problems with the turbo engines were chronic unreliability, which typically manifested itself in explosive, fiery fashion, and throttle lag.

At first the delay between the throttle being opened and the turbo spinning up meant a huge burst of power arrived whole seconds after the driver depressed the accelerator – not what you needed at Monte-Carlo on a damp track.

Every team found it had to go through this difficult development period and it thrust the British chassis constructors in the direction of major car manufacturers. Brabham teamed up with BMW, Williams with Honda, McLaren with Porsche. A sport that just a few years ago had largely been the Cosworth brigade versus Ferrari now boasted the names of many top car builders.

However Renault’s unreliability stopped them from winning a championship with a turbo engine. In 1982, their fifth full season, they had still not ironed out the car’s mechanical gremlins and several DNFs too many stopped Alain Prost from being champion.

He came even closer the next year, but by then their rivals had caught up and, aided by some radical fuel, Prost was beaten by Nelson Piquet’s Brabham-BMW.

By that season – 1983 – the writing was writ large on the wall. The British teams, which only the previous season had resorted to flagrant rule-bending to bring their Cosworth-powered cars on terms with the turbos, had begun to drop their DFVs for turbo power.

A notable exception was Ken Tyrrell, who didn’t get his hands on a turbo until 1985 – and even then not for very long. The 1983 season also saw the final win for a normally aspirated engine in a race against turbos, when Michele Alboreto won at Detroit in his Tyrrell.

Engine horsepower outputs skyrocketed. Rumours of one-lap wonder qualifying engines capable of 1,400 bhp – nicknamed ‘grenades’ – were not that far wide of the mark. The FIA searched desperately for a means of containing speeds and began by reducing fuel tank sizes.

This brought howls of protest that races would be reduced to ‘economy runs’. And at first it did result in the unedifying spectacle of drivers running out of fuel within sight of the flag – the computer technology used to monitor fuel consumption being in its infancy.

Probably the worst such race was the 1985 San Marino Grand Prix. The cheers of the Ferrari-mad crowd faded when leader Stefan Johansson ran out of fuel within a few laps of the flag. So did Piquet’s Williams and Ayrton Senna’s Lotus.

Prost crossed the line to win in his McLaren – but had so little fuel left his car was disqualified for being underweight. Victory eventually went Senna’s team mate Elio de Angelis.

The teams grappled with the rules as the FIA tightened the leash further. Fuel allowances were cut and maximum boost levels limited with pop-off valves. Each year brought new claims that an ‘equivalence formula’ could be found to allow the normally aspirated cars to compete. But the turbos continued to win race after race.

In 1987 it drove the governing body to set up separate championships for non-turbo runners. Unsurprisingly they were dominated by Tyrrell who won the constructors’ title (The Colin Chapman Cup) and driver Jonathan Palmer took the drivers’ (The Jim Clark Cup). The championships, largely forgotten by the history books, were dropped after one year.

This came as the FIA finally acted to draw the turbo era to a close – it would be normally-aspirated engines only from 1989.

The 1988 season saw McLaren-Honda win all but one race in a fearsome display of technical superiority and reliability. Those were not the words with which one might have accurately described turbos during their infancy, but that’s what a decade of development by top F1 teams can achieve.

F1’s turbo era is remembered for its spectacle – the ultra-high performance qualifying engines and flame-spitting exhausts. Faced with such an excess of power the teams could run steeper wing angles which not only gave the cars more grip in the corners, but created more drag and facilitated overtaking.

Outside of Formula One turbos still remain in some top racing series such as Champ Cars. And it has been suggested that, in F1’s search for an environmentally friendly formula for the future, compact turbocharged and supercharged engines might one day be an answer.