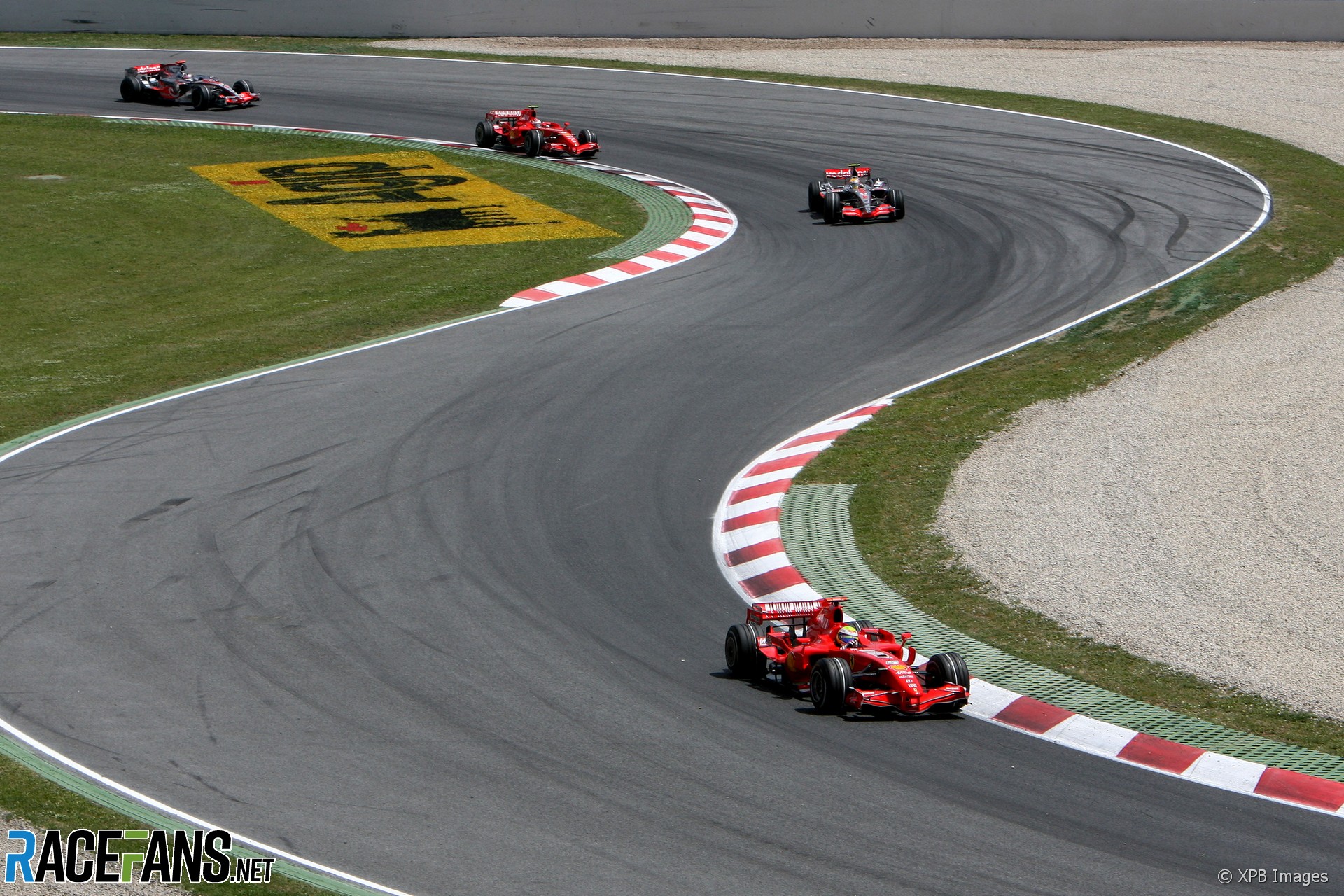 Even a refuelling fire couldn’t stop Felipe Massa from scoring his second Grand Prix win in a row.

But it is Lewis Hamilton that leads the drivers world championship having finished second – even though the rookie driver hasn’t won a race yet this year.

Fernando Alonso gambled his race on a risky move at the first corner – but lost out and finished third after a trip across the gravel.

Both the weekend’s GP2 races had seen incidents at the first corner – one driver even managing to crash on the straight.

With the two Ferraris alongside the two McLarens – the latter on the dusty side of the grid – a close start was on the cards. Especially as Alonso had looked as though he was fuelled more lightly than Felipe Massa ahead of him.

With the packed crowd cheering for Alonso and the cars lined up the first attempt at a start was a complete anti-climax: Jarno Trulli lost fuel pressure in his Toyoa and wasn’t able to start.

Having cruelly lost his best qualifying position of the year he was wheeled off to start from the pitlane as the others set off on another formation lap.

The extra bottled-up tension produced a dramatic start. Alonso got alongside Massa on the outside into the first corner but squeezed the Ferrari driver too hard and ended up tripping across the gravel, dropping to fourth.

Further around the first lap Fisichella ran wide into the gravel at Campsa and produced a traffic jam when he rejoined the track. This caught out Ralf Schumacher who was slowed on the exit of La Caixa – causing Alexander Wurz to hit the back of the Toyota.

Wurz limped into the pits and retirement but Schumacher was able to continue after his visit to the pits.

Lewis Hamilton passed Raikkonen on the run down to the first corner and now Alonso was trying to pass the Finn, taking a look on the outside of La Caixa on the second lap, but not able to get ahead.

Massa was streaking away at around half a second a lap from Hamilton, who in turn was not being troubled by Raikkonen.

Joining him in retirement was Mark Webber’s Red Bull. Their unreliability problems continued but the next failure was much more of a surprise.

Kimi Raikkonen’s Ferrari slowed at La Caixa and Alonso blasted past as the Ferrari driver limped into the pits. Ferrari suspected electrical failure.

A dramatic failure hit Scott Speed on lap ten when his left rear tyre exploded without warning on the main straight. He kept the Toro Rosso under control as he brought the car to a halt inside turn one.

By lap 17 Massa had nine seconds over Hamilton, with Alonso a further 3.9s adrift. The BMWs were in their now typical ‘best of the rest’ position with Robert Kubica fourth ahead of Nick Heidfeld.

David Coulthard clung on to a highly impressive sixth with Heikki Kovalainen pushing him hard and Nico Rosberg eighth.

Ferrari suffered a near disaster during Massa’s pit stop on lap 20 – the Brazilian left the pits with a flash of flame behind him as fuel fell on the exhausts. thankfully there were no injuries – but had Massa taken his full load of fuel on board.

Alonso was arriving in his pit box as Massa departed in a blaze of glory. The Spaniard gambled with an early switch to harder tyres to try and seize an advantage again.

This left Hamilton in the lead for two laps before his stop which by comparison was entirely undramatic.

With Kubica also having pitted this left Heidfeld in the lead before his stop on lap 25 which was another disaster. The BMW was released while the front-right wheel man still had his gun attached to the wheel nut.

The nut flew off yet the team inexplicably sent Heidfeld out rather than pulling him back to his box. He limped around a very slow lap, somehow without losing the wheel, before returning to the pits. By the time he resumed he was 15th.

Only one driver was behind him, Jenson Button, who had suffered an embarrassment himself. On leaving the pits after his stop he clipped the back of team mate Rubens Barrichello’s car, losing his front wing, and forcing another pit stop.

Massa continued to grow his lead which was 11.1s by lap 28. Hamilton in turn had an 11s advantage on Alonso. The Spaniard was lapping noticeably slower on the harder tyres and Kubica had closed to within 2.3s.

Heidfeld’s troubles had promoted Coulthard to fifth but he was forced to defend from Kovalainen’s Renault. Rosberg, seventh, led Barrichello who was suffering no apparent ill-effects from his mauling at the hands of his team mate.

Kovalainen made an early second stop on lap 30. At first it looked like a tactical switch to a three-stop strategy in a bid to pass Coulthard. But it transpired the Renault fuel rig was faulty and the same problem would hit Fisichella later.

In the middle phase of the race the track conditions changed and some drivers coped with it better than others.

The leaders dropped into the 1m 24s but Hamilton was only able to match Alonso despite being on the softer rubber. Kubica, Coulthard and Kovalainen were all able to do the pace of the McLarens.

Massa stretched his advantage throughout the second stint, leading by 18s by lap 39. He pitted three laps later and suffered no refuelling problems this time.

A flurry of pit stops followed. Fisichella made his mandatory switch to harder tyres on lap 41. He got ahead of Barrichello but, like team mate Kovalainen, would be three-stopping.

Hamilton’s stop came on lap 46 – four laps later than Massa, in which time he’d taken 1.3s off the Brazilian on one lap. With 18 laps remaining he resumed too far back to mount a challenge for the lead.

Alonso, surprisingly, waited until lap 49 to get back on soft tyres. Crucially, he came back out of the pits still ahead of Kubica.

Meanwhile the steady stream of retirements had continued. Heidfeld’s race was already spoiled before it ended on lap 47. The same could be said of Ralf Schumacher, who pulled up two laps earlier. Vitantonio Liuzzi had also parked his Toro Rosso on lap 20.

The top three remained static in the final stages – Massa and Hamilton lapping in the high 1m 23s. Alonso was able to take up to half a second a lap out of his team mate on the softer rubber – but with 12 laps to recover 15 seconds it wasn’t likely to add up to second place.

Fisichella in eighth had a 14 second advantage over Takuma Sato’s Super Aguri on lap 55 – but the Renault driver would have to stop again on lap 58.

The Italian came within a second of getting out ahead of Sato – but the Japanese driver got ahead with only six laps to go.

Coulthard, running fifth, had a scare when he lost one of his gears in the Red Bull’s new seamless shift gearbox. His sixtieth lap was six seconds off the pace and although he was able to bring the deficit down to two seconds, Rosberg was five seconds behind him with three laps to go.

Massa up front had no such problems and cruised to the flag in the final laps. Hamilton and Alonso took second and third to stretch McLaren’s lead in the contructors’ championship.

Hamilton leads the drivers championship with 30 points ahead of Alonso, 28, and Massa, 27. Raikkonen’s failure to finish sees him stuck on 22.

Kubica was an excellent fourth. Coulthard clung on to fifth and delivered a timely riposte to those who have recently questioned how much longer his career has to run.

Rosberg gave Williams some useful points with sixth and Kovalainen was seventh.

But if Massa and Hamilton had causes for celebration, so did Super Aguri. Fisichella never looked like passing Sato who clung on to take the Leafield team’s first ever championship point.

The remaining finishers were Fisichella, Anthony Davidson, Button, Adrian Sutil and Christijan Albers – the latter having taken a drive-through penalty halfway through the race for ignoring blue flags.

But it was Massa who ignored the blue flags of the crowd – on a day when everyone expected the champion to take a commanding home win, Massa rained on the Spanish parade.