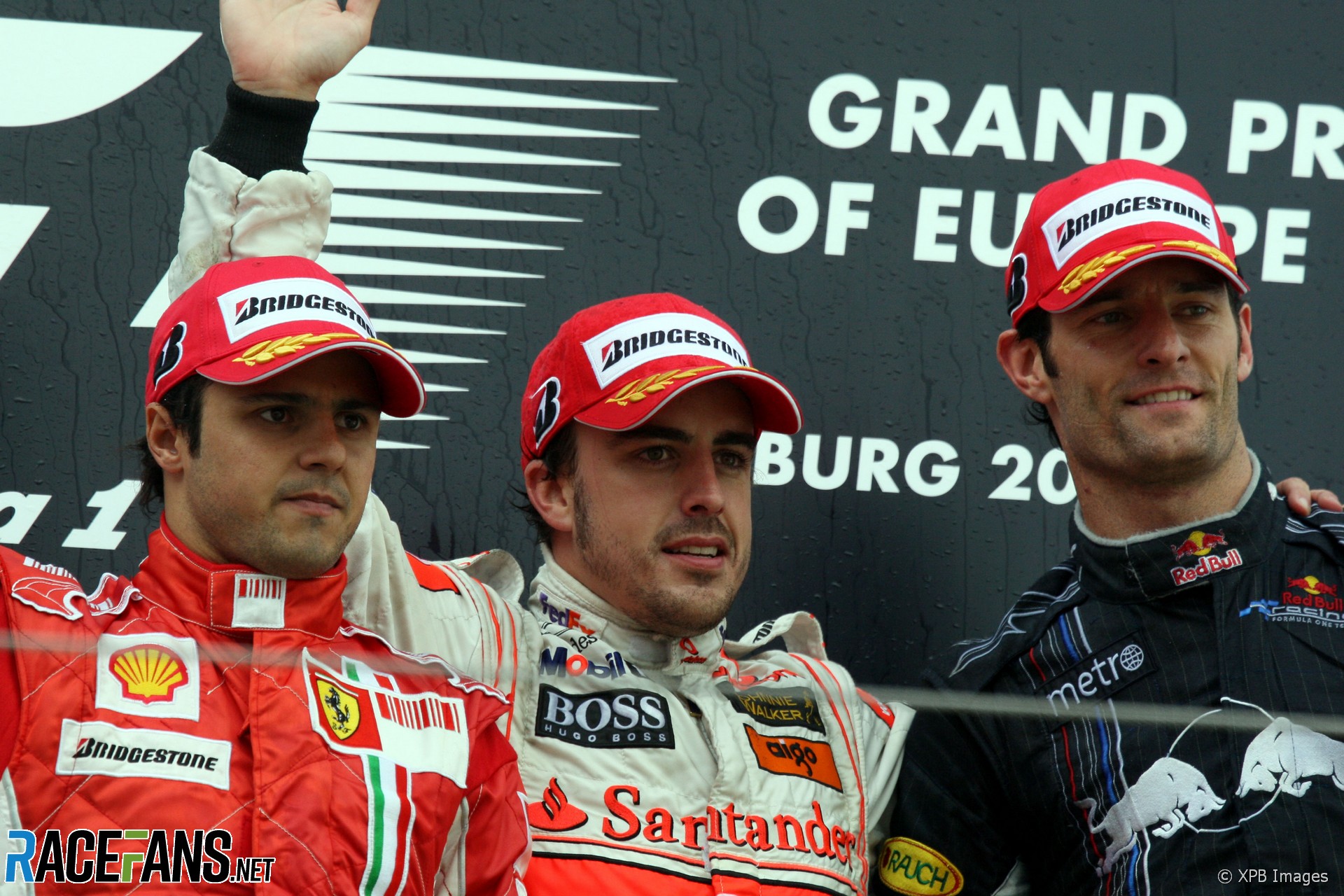 Fernando Alonso finished first after a frantic race at the Nurburgring – but he may yet face a penalty appeal after narrowly avoiding a collision in the pit lane.

He produced a scintillating pass to seize the lead from Felipe Massa with four laps remaining.

The race began and ended with rain falling – a heavy cloudburst forcing the race to be stopped early on, and allowing Markus Winkelhock to lead his first ever race.

But championship leader Lewis Hamilton failed to score after enduring a race in which his fortunes changed at every turn.

Before the start it was an open secret that Fernando Alonso was fuelled lighter than the Ferraris he was sandwiched by, and that the start line dash into the perilously tight first corner would be crucial.

That was equally true for team mate Lewis Hamilton, starting back in tenth place after his massive crash in qualifying.

As the cars sat on the grid ready for the formation lap messages began to filter in that rain was imminent – even if the clouds didn’t seem to threaten it.

It quickly transpired that those clouds were fat with rain. It sprinkled on the cars as they rolled around to the start of the grid – causing Spyker to pit Markus Winkelhock for wet weather tyres. It would shortly prove to be an inspired decision.

Kimi Raikkonen made a rapid, clean getaway and Felipe Massa nosed ahead of Alonso at the first corner.

Lewis Hamilton made a very strong start, picking off a string of cars at the first corner and reaching the BMWs by the second bend. But on the damp track Nick Heidfeld swiped team mate Robert Kubica, and Hamilton picked up a left-rear puncture in the melee.

But Hamilton was about to get a get out of jail free card – the rain began to pour down, forcing everyone into the pits for wet weather rubber.

Almost everyone – Raikkonen understeered straight on at the pit lane entry, and had to do another lap while the rest of the field (except Winkelhock) piled in to the pits.

The rain came down so heavily that the field had almost caught Raikkonen by the end of the second lap – and Winkelhock had shot off into a 20 second lead!

But now the track surface was nearly flooded in parts and car after car sailed into the barriers at the first corner. First among them was Jenson Button, who had been running fourth, then Lewis Hamilton, Adrian Sutil and Nico Rosberg.

Race control sent the safety car out to control the race but it didn’t look up to the job. Bernd Maylander had to pull it out of the way as he spotted Vitantonio Liuzzi flying towards him backwards. Frighteningly, Liuzzi stopped just short of a JCB that had been sent out to recover one of the cars.

Button had hit the wall fairly hard to the digger proceeded to Hamilton, the next car to have crashed, craned him out of the barrier and set him on his way again.

With the cars taking nearly four minutes to complete a lap behind the safety car and a quarter of the field parked at the first corner, the race was understandably stopped.

This caused a lot of confusion among the teams, who hadn’t seen a race stoppage in six years. It was 20 minutes before the race resumed, by which time the sun was out and steam rising from the circuit showed it was drying very quickly.

The cars were sent off to restart the race behind the safety car with Winkelhock up front, with the top ten behind him composed of Massa, Alonso, Mark Webber, David Coulthard (up from 20th), Heikki Kovalainen, Raikkonen, Alexander Wurz, Rubens Barrichello and Giancarlo Fisichella.

But luckily for Hamilton, under the 2007 safety car rules, he was able to get his lap back. He trundle past his rivals and the safety car and set off on a rapid lap of the circuit to catch the field again.

McLaren chose the opportunity to top his car up with fuel – but Hamilton made the critical decision to switch onto dry weather rubber. That proved disastrous, as he slithered off at the Dunlop hairpin and was lapped by everyone all over again.

Winkelhock only led a few laps of the race when it resumed before Massa and Alonso boomed past him at the first corner, followed by the two Red Bulls, Coulthard also nipping past Webber.

Raikkonen tried to make headway quickly and passed Kovalainen at the first turn – only for the Renault driver to fight back and re-pass the Ferrari at the following turn.

By lap ten Hamilton had set the fastest time in the final sector of the lap, but was two seconds slower than the field at the first sector where the track was wetter. Sensing the opportunity to profit, Ferrari pitted Raikkonen and switched him to dry tyres with perfect timing.

Everyother driver bar Hamilton (already on dry tyres), Coulthard (who briefly led) and Heidfeld pitted the next time around. But Raikkonen’s earlier stop vaulted him up to third behind Massa and Alonso.

Once all the drivers had switched to dry tyres the damage to Hamilton’s race was clear – he lay 16th, 85.5s behind Massa – or to put it another way, 10 seconds away from being lapped again.

The rain had produced a mixed-up order and 1.6 seconds now covered a five-car battle for fifth involving Coulthard, Kubica, Schumacher, Heidfeld and Fisichella. Something had to give and sure enough Schumacher ran wide at the chicane, Heidfeld dived down the inside at the Coca-Cola Kurve, and punted Schumacher out of the race.

Kovalainen’s strong drive continued with a strong pass on Wurz for fifth on lap 19. But Kovalainen proved to be more lightly fuelled than many of his rivals, pitting eight laps later.

His team mate Fisichella pitted six laps later and came back out 13th, 2.8s ahead of Hamilton. The Mclaren driver crowded the Renault at every turn, finally passing him around the outside of the fast kink before the chicane with at least two wheels off the track. Spectacular though the pass was, it delayed him by almost three seconds.

On the 35th lap Raikkonen’s Ferrari slowed dramatically at the first turn and began cutting out intermittently. He managed to limp back to the pits – crawling to a halt just within sight of the Ferrari garage. His Nurburgring curse had struck again.

He joined Winkelhock, whose car had stopped on the 15th lap with hydraulic failure, and Sato, whose Super Aguri gave up on lap 21.

Massa kept his advantage over Alonso in the final round of pit stops but the Spaniard kept the Ferrari in his sights.

Hamilton took tenth off Barrichello on the 42nd lap but this extra delay brought Massa within range to lap him. A blue flag was waved at Hamilton on lap 46, and he let the Ferrari by.

With ten laps remaining Renault took an unusual gamble – pitting Kovalainen from fifth to put him on intermediate tyres. The team expected more rain and sure enough it began to fall two laps later. By lap 54 everyone was in the pits again except Hamilton, who having switched to dry rubber too soon before, was now taking too long to switch back.

In the crowded pitlane McLaren sent Alonso out straight into the path of Fisichella’s Renault, passing dangerously close to the Honda pit crew. But if the team were to get a penalty, it would have to come after the race had finished.

Out on the track Alonso was decisively quicker than Massa and tried to pass the Ferrari at every corner. Finally on lap 56 he got on the outside of Massa at the Valvoline Kurve, seizing the inside for the following corner and toughing it out even as the two banged wheels. Massa remonstrated with Alonso about it after the race – but Alonso’s move looked clean.

As the final lap began Hamilton finally looked within range of scoring a point. He took Fisichella in a masterful move on the outside of the same corner where Alonso passed Massa, and set off after eighth placed Kovalainen.

Alonso had an eight second lead by the end of the race – which suggested that he just might fear a retroactive penalty for the pit lane misdemeanour. Webber held off Wurz by 0.2s to take third, with Coulthard making it a double points finish for Red Bull in fifth.

And the final point? That went to Kovalainen, who crossed the line 1.5s clear of Hamilton. Fisichella was outside the points, as were Barrichello, Davidson and Trulli.

Pending appeals, Alonso is now two points behind Hamilton – and McLaren have added another two points to their advantage over Ferrari.

What more could you ask for? It would be nice if it didn’t take rain to create an exciting race, but I’m not looking a gift horse in the mouth. Hamilton and Alonso both made brilliant passes – it would be a terrible shame if Alonso’s win were taken from him.