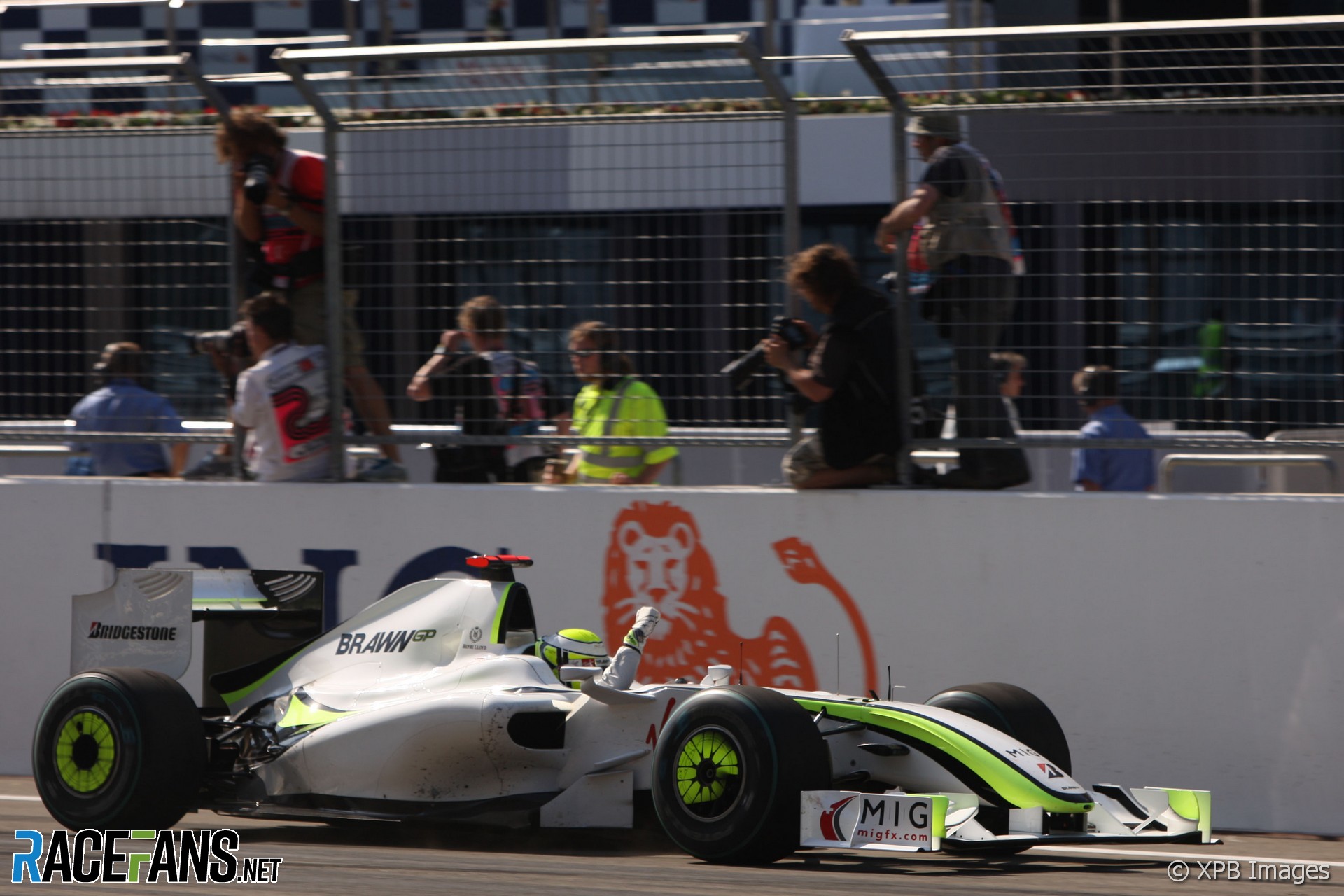 Jenson Button added Istanbul Park to the growing roster of circuits he has conquered this year.

Pole sitter Sebastian Vettel could offer no more than token resistance to the Brawn steamroller, and he also lost out to team mate Mark Webber.

It all goes wrong for Vettel

As was widely expected, Vettel held onto his lead at the first corner with little difficulty. But it only lasted as far as turn nine – where the Red Bull driver slewed off the track, letting Button past.

Vettel’s drama was the highlight of a hectic first lap which packed in more action than the rest of the race combined.

Barrichello loses out at start

Rubens Barrichello bogged down badly, slumping to 13th on the first lap. Jarno Trulli scorched by into third place, but lost that to Webber after running wide at turn seven.

Behind them was Felipe Massa, who had forced Kimi Raikkonen to swerve out of his path on the run to the first corner.

Barrichello now tried to make amends for his poor start by getting stuck into Kovalainen’s McLaren. But he discovered the frustration of battling a car equipped with KERS – whenever he got close enough to pass, Kovalainen jabbed his power boost button and quickly pulled away.

Barrichello was also hamstrung by the lack of a sixth gear – a legacy of his start line drama. Frustration eventually got the better of him and Barrichello launched his car into the side of the McLaren at turn nine. Kovalainen escaped unscathed – Barrichello, spun, lost more time and resumed 17th behind the other McLaren of Lewis Hamilton.

Hamilton’s McLaren had 31kg more fuel on board than Kovalainen’s and Barrichello was able to make it past on lap eight. One lap later he took Nelson Piquet Jnr. But his next passing attempt – on Adrian Sutil at the final turn – went all wrong, and Barrichello had to limp back to the pits for a new front wing.

While Barrichello supplied the entertainment very little else was happening. Button had a 4.6s lead over Vettel by lap 11, who in turn was 4.9 ahead of Webber.

Alonso was the first to pit for a scheduled stop on lap 13, having been the only driver to use the unfavourable soft tyre for the first stint. Two laps later Vettel was for a short stop as he stuck with the three-stop plan, mirroring Lewis Hamilton’s efforts at the same track last year.

But while Hamilton had been able to pass then-leader Felipe Massa on the track, Vettel could not do the same to Button. Whether it’s a trait of the RB5 in turbulent air, or just in Vettel’s nature, he hasn’t been able to pull off passes when he’s needed to this year.

Button never looked like cracking under the pressure, except for a brief moment when he ran wide at the final corner. The pair flashed across the line separated by 0.2s. But even then Vettel stayed his hand, not even so much as feigning an attempt at passing the leader, who would surely have been at pains to avoid a collision had Vettel risked a move.

That not only decided the contest for the lead, but also second place. Unable to clear Button, Vettel had no chance to extend his lead over Webber, and after the final round of stops found himself behind his team mate.

Despite rapidly catching Webber, Vettel was soon instructed by his team not to overtake. Whether he would have been able to is another matter, of course.

Trulli lost fourth place to Rosberg at the first round of pit stops – but re-passed the Williams at the second round. Felipe Massa’s run of consecutive Istanbul victories came an end, the Brazilian finishing sixth.

This time a year ago Robert Kubica had just won his first Grand Prix and taken the lead in the drivers’ championship. At Istanbul he finally broke his points duck for 2009, finishing seventh.

Timo Glock rounded off the points finishers having been soundly beaten by Trulli who, at one point, yielded position to his team mate as they ran conflicting strategies.

Raikkonen was ninth after his troubles and Alonso’s gamble of a short first stint on the soft tyre yielded no rewards.

Nick Heidfeld was 11th ahead of Kazuki Nakajima, whohad been on course for seventh place before a problem changing the front-left wheel at his final pit stop.

The highest-placed McLaren was Hamilton in 13th, just barely finishing on the lead lap, able to watch the victorious Button crossing the finish line in his mirrors. Hamilton had successfully completed a 26-lap second stint on the soft tyres which allowed him to pass his two-stopping team mate.

Giancarlo Fisichella at least made it around the first corner without hitting anyone – but he scarcely made it any further, his Force India failing soon afterwards.

Barrichello’s car packed in ten laps from home, the first time a Brawn has failed to go the distant. Afterwards the unhappy Brazilian compared his start-line problems to those he had suffered in Australia, and voiced concerns that such problems don’t seem to happen on the other side of the garage.

Such problems are exactly what he and Vettel need if they are to make any impression on Button’s runaway title lead. Barrichello now trails him by 26 points, and Button will be favourite to win again on home ground in two weeks’ time.

Driver of the day

Who else to pick for driver of the day other than Jenson Button? He pounced on Vettel’s mistake, he didn’t flinch under pressure, and he was relentlessly fast.

Here’s your picks for driver of the day via Twitter:

MarkF1 – My driver of the day is Button again for keeping Vettel behind him when he needed to.
Gazza999RT – Hamilton,best impression of a mobile Chicane seen in years
picknicking – I have to say Nico Rosberg and Jarno trulli!
alboreto – Honourable mention to Piquet for nice driving!
alboreto – has to be Button really doesn’t it. Superb.
KarolMcD – Button, total control.
hannaherika – driver of the day for me would be vettel #F1
f2point4 – You don’t really want to ask me that. ;-) I’m sure Felipe drove as well as he did the years before. It’s the car. :-(
MartinB1884 – JB for me. Composure personified but webber and trulli get honourable mentions.
garethdjones – I think you have to say Jenson Button, but Mark Webber drove a superb race to finish 2nd
Tim_Meakins – Webber close 2nd, but have to say Jenson Button!
recinthecity – Jenson Button!
kayels – Jenson Button :-) and Webber
cardiffblogger – Nobody really stood out for me. Piquet wins the slalom award though with those crazy maneuvers every time camera cut to him
PaulNUK – Button by a mile

Who is your pick for driver of the day? Leave a comment below.