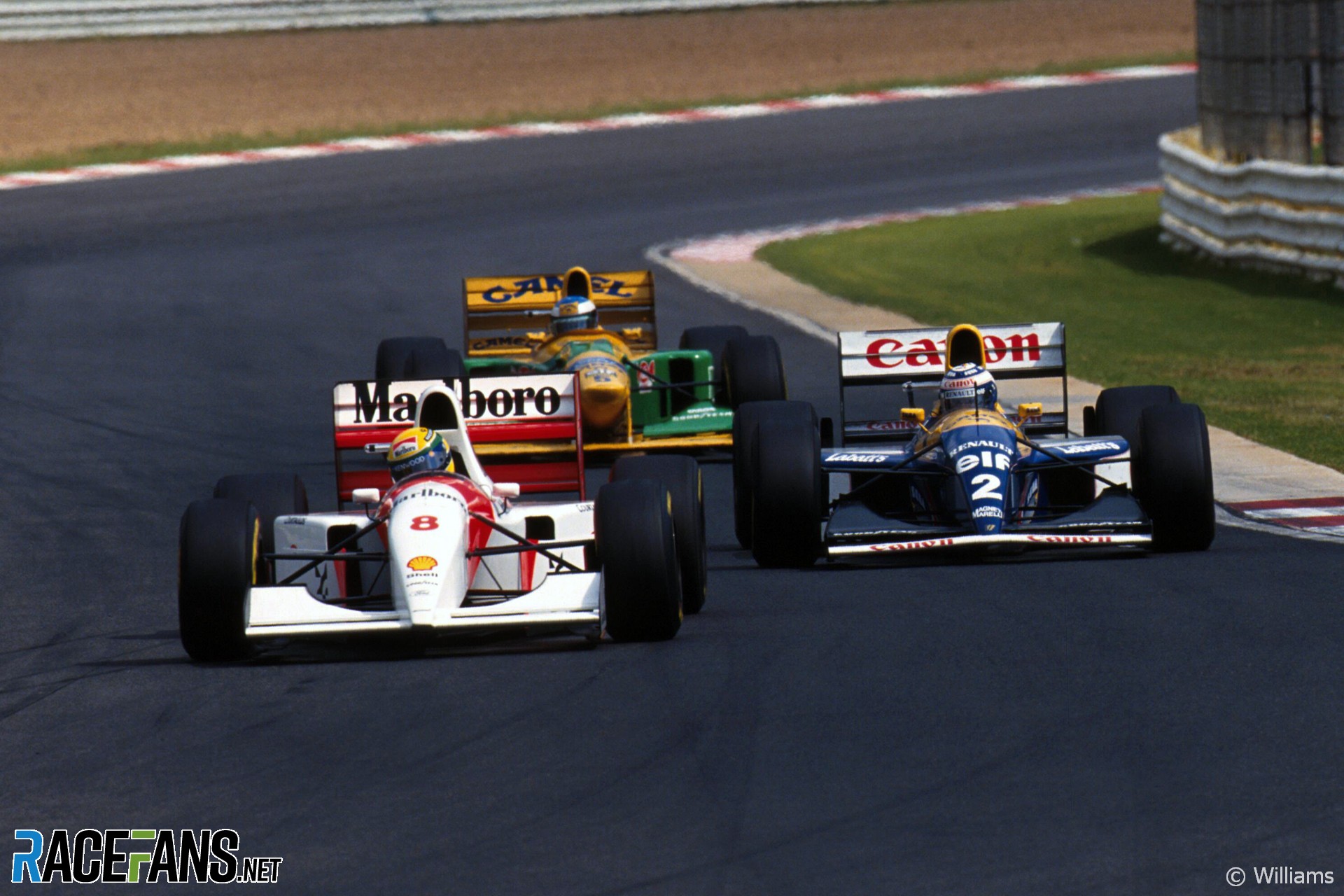 You might have noticed a certain international football tournament is starting in South Africa today.

Formula 1 has a long and somewhat controversial history of racing in South Africa. The first world championship race was held there in 1962 and, after 23 races (plus one which was stripped of its championship status), visited the country for the final time in 1993.

F1 emerged from an unusually turbulent off-season – even by its own standards – into the first race of the 1993 season at Kyalami.

Much of the arguments were centred on Alain Prost’s return from sabbatical to drive for Williams. As well as sending reigning world champion Nigel Mansell in a huff and off to IndyCars, Prost held a veto which prevented Ayrton Senna from occupying the second car.

A furious Senna considered not competing in 1993, and decided at the last minute to drive for McLaren on a race-by-race basis.

Prost was also in hot water with the governing body, facing a FISA World Council meeting in the days after the race having been accused of making damaging comments about F1.

This was the second and, as it would turn out, final time the race would be held at the revised version of the track.

The new track had proved something of a disappointment when the teams first raced on it the year before. Although it retained a couple of corners from the original circuit, much of the classic track was gone.

Despite that on Sunday the racing drowned out the politics. The South African Grand Prix saw a gripping, three-way battle for the lead and a sudden rainstorm in the dying laps.

Qualifying showed Williams had lost little of their performance advantage over the winter. Prost gave the FW15C the first of 15 consecutive pole positions.

Senna joined him on the front row, less than a tenth of a second behind. This was the first time the pair had shared the front row of the grid since their notorious collision at Suzuka in 1990, and there was much speculation over what might happen at the start.

The gap between Senna and his rookie team mate Michael Andretti was even greater. The American was three seconds slower than Senna and lined up ninth on the grid.

With 26 cars entering – the Marches of Jean-Marc Gounon and Jan Lammers failed to appear – the grid was filled with no non-qualifiers.

The back row was occupied by the two Lola Ferraris, as it would be for most of 1993. Michele Alboreto and newcomer Luca Badoer were 6.1 and 9.0 seconds off pole position respectively.

Senna, Prost and Schumacher do battle

Had Prost made a clean start it would have been a processional race. But Senna beat him into turn one and Hill and Schumacher passed the French driver as well.

Hill’s grasp on second place lasted only a few moments. As they rounded the fast second turn his Williams snapped away from him and he spun alarmingly in front of the pack.

Fortunately he spun the car the right way around without hitting anyone and resumed, having slipped to 12th place. His disastrous start was compounded when, having spent 16 laps trying to find a way around Philippe Alliot, he was rammed out of the race by Alessandro Zanardi.

The other Williams driver was having a difficult time overtaking as well. Although Prost had made light work of Schumacher, passing the Benetton on lap 13, his nemesis Senna proved much tougher.

For lap after dogged lap Senna clung on, protecting his line carefully to keep Prost at bay. Schumacher was treated to a grandstand view of Senna’s defensive tactics.

On more than one occasion Prost got alongside going into the fast turn one but Senna stuck to his line and forced his old rival to back down.

Finally, on lap 24, Prost drew past around the outside of Senna at the first corner, giving him the inside line for the second.

But Senna wasn’t about to give up and prepared to duck into the pits, hoping to jump Prost by taking on a set of fresh tyres sooner.

But he reckoned without Schumacher. The Benetton dived past him on Senna’s in-lap, costing the pair vital time.

The two of them pitted together at the end of the lap and, although McLaren turned Senna around quickly enough for him to get out in front of Schumacher again, Prost retained his lead when he pitted the next time by.

Now Schumacher had to find a way past Senna and, on lap 39, a risky lunge backfired as he spun and stalled, ending his race.

Benetton’s misery was complete when his team mate Riccardo Patrese, who had inherited third place, spun off seven laps later.

This meant just ten cars were left running with 26 of the 72 laps remaining. Among the retirements was Rubens Barrichello, who’d been running as high as seventh in his first F1 start before his gearbox seized.

This was nonetheless a far more impressive performance than Jordan team mate Ivan Capelli, who qualified behind Barrichello then spun off on the third lap. He would last just one more race before being replaced.

With ten laps to go, dark clouds gathered above the track and the first spots of rain began to fall, causing Gerhard Berger to spin his Ferrari in the fast corner before the pit lane entrance.

By the start of the penultimate lap the rain was falling heavily and Prost was feeling grateful of the huge gap he’d built up over Senna. He backed off so much cars began to unlap themselves – including the Derek Warwick-JJ Lehto battle for sixth.

Thalt became a battle for fifth when Berger’s Ferrari V12 cried enough. As the storm worsened Lehto squeezed past Warwick who then spun off, his Footwork becoming stuck in a gravel trap. Unable to finish his 69th lap he was classified behind Berger and out of the points.

While one Frenchman tiptoed home to victory another was feeling similarly jubilant – and vindicated. Cyril de Rouvre had bought Guy Ligier’s team over the winter and invested a huge amount of money buying a supply of Renault engines and Williams’ semi-automatic gearbox.

To this package he added – controversially – a pair of British drivers, Martin Brundle and Mark Blundell, despite the team still enjoying the backing of French state-owned companies. But Blundell clung on to bring the car home in third place – the team’s first podium since Jacques Laffite finished second at Detroit seven years earlier.

Brundle, meanwhile, had a miserable end to his 100th Grand Prix start. He spun into retirement when he hit a patch of oil dropped by Erik Comas’s Larrousse, which had circulated for three laps with a thick black cloud spewing from its tail.

No return to Kyalami

During the seventies many other international sports cut their ties with South Africa in the face of international criticism of the abuses of the racist apartheid regime – particularly after the government’s bloody suppression of a peaceful uprising in Soweto in 1976.

Formula 1 was one of the last sports to leave South Africa, still racing there as late as 1985 despite growing international criticism and boycotts by several teams and sponsors (read more about that here).

Its return to the country in 1992 came after the dismantling of the apartheid regime had begun, but before the country’s first elections with full representation of black people were held in 1994.

On the day after the 1993 race its promoter Mervyn Key was arrested. The parent company which owned the circuit, Tollgate, had collapsed several months earlier and the liquidators had only stayed their hand to allow the race to go ahead. The prosecution against Key on charges of fraud and forgery later collapsed.

Although F1 never returned for a race teams continued to use the track for testing until comparatively recently. The Gauteng Motorsport Company pursued the possibility of bringing an F1 race back to the circuit, but the company folded at the end of last year.