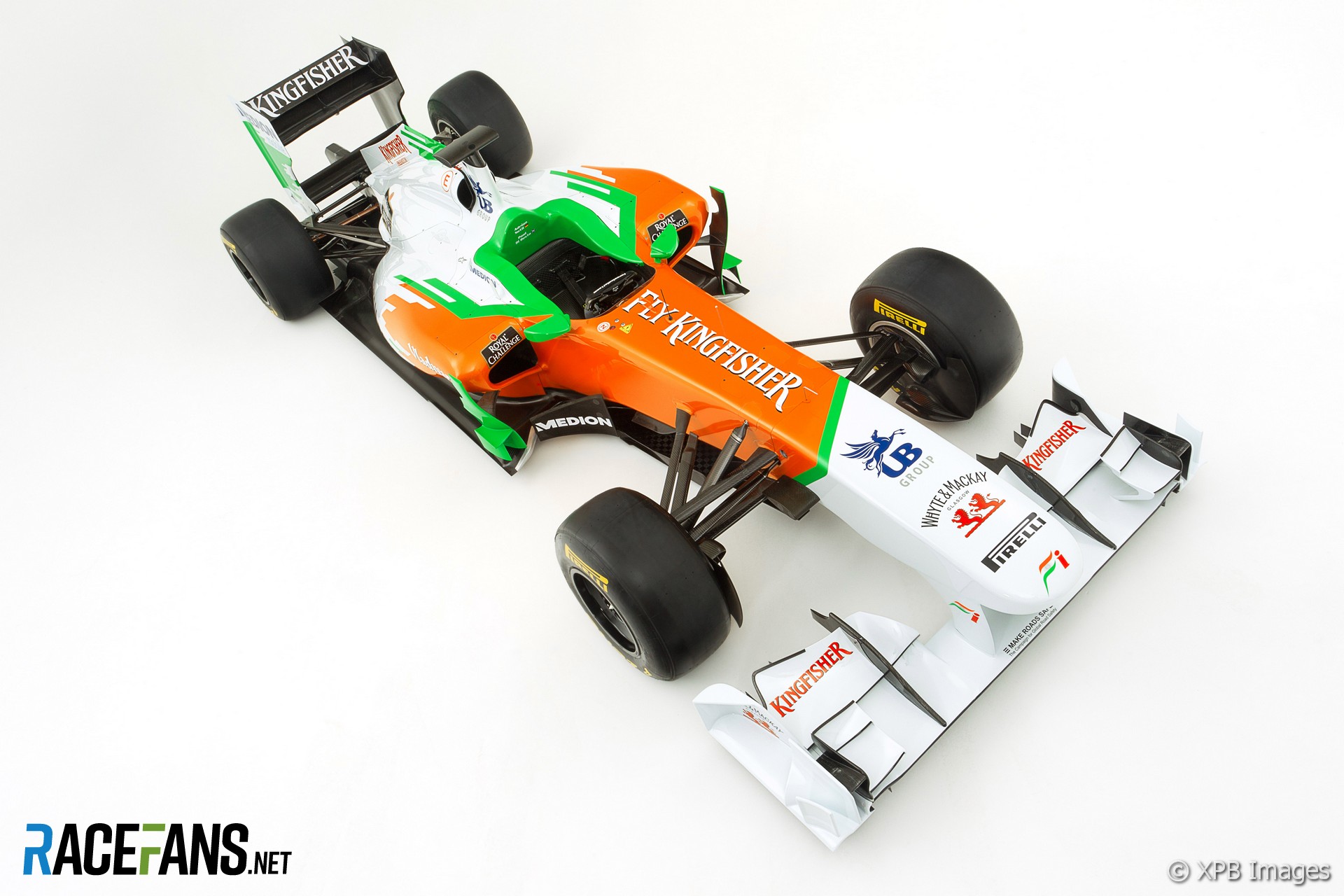 Force India have revealed the first images of their 2011 F1 car, the VJM04.

This year the team say they want to finish in the top five.

The team will use Mercedes power for the third year in a row.

Chairman Vijay Mallya said: “This year there is even more to be optimistic about. We’ve got three race drivers that are hungry to take the next steps in their careers, whether that be points, podiums or wins.

“We have an experienced technical team that have the ingenuity, flexibility and drive to adapt to the new wave of rule changes, and we also have the tools and resources in our partnerships with McLaren Applied Technologies and Mercedes-Benz High Performance Engines to aim even higher.

“Not to mention the very special event, and one that I personally can’t wait for, the inaugural Indian Grand Prix. What better place would there be to reach some of those aims than on our home soil?”

Adrian Sutil said he hopes to finish in the top ten in the drivers’ championship for the first time this year:

“The progress the team has shown over the past two years has been very impressive and what I’ve seen in the factory and at the wind tunnel over the past weeks indicates that the rate will continue this year.”

Paul di Resta makes his F1 debut with the team this year. He said: “I don’t want to say exact targets on record as there are so many factors that can come into play.

“What I do want to do is to have a positive approach, finish, be consistent and contribute strongly to the team’s overall performance. We’ve got high aims of finishing in a good constructors’ championship position and I know that I’ve got to play my part in this.”

Technical director Andrew Green explained some of the changes on the car:

“The most obvious visual change is that we’ve gone away from a conventional roll-hoop to a blade. This gives us a small packaging improvement compared to a more conventional style.

“The engine cover is different, in-line with the abolition of the F-duct system. But there are a lot of differences under the skin that people won’t necessarily notice.”

“We’ve recovered a lot of the aerodynamic performance, we believe. We still have a little bit to go, but we are still in the process of the realignment after the end of last season, because it does take a long time to move aerodynamically from one position to another.

“The movable wing is a whole new game, and we’ll be trying to exploit its performance to the max.

“Exhaust management will also be a big area of development this year. There will be an upgrade for the first race, so there are some changes that will come into effect at the Bahrain test. Further down the line there are some big updates for the front of the car coming in for the first European race.”

The team have recruited a new senior tyre engineer, Jun Matsusaki, to help with the switch to Pirelli tyres.

Greem also confirmed the new car will use a Kinetic Energy Recovery System: “‘The Mercedes KERS system looks very strong, and we’re really happy with it.

“We’ve done a lot of running in the simulator, so the drivers are well up to speed with how to use it. We’re well developed with what we have to do for harvesting and deployment. It’s smaller and lighter than in 2009, and packaging required very few vehicle compromises.”