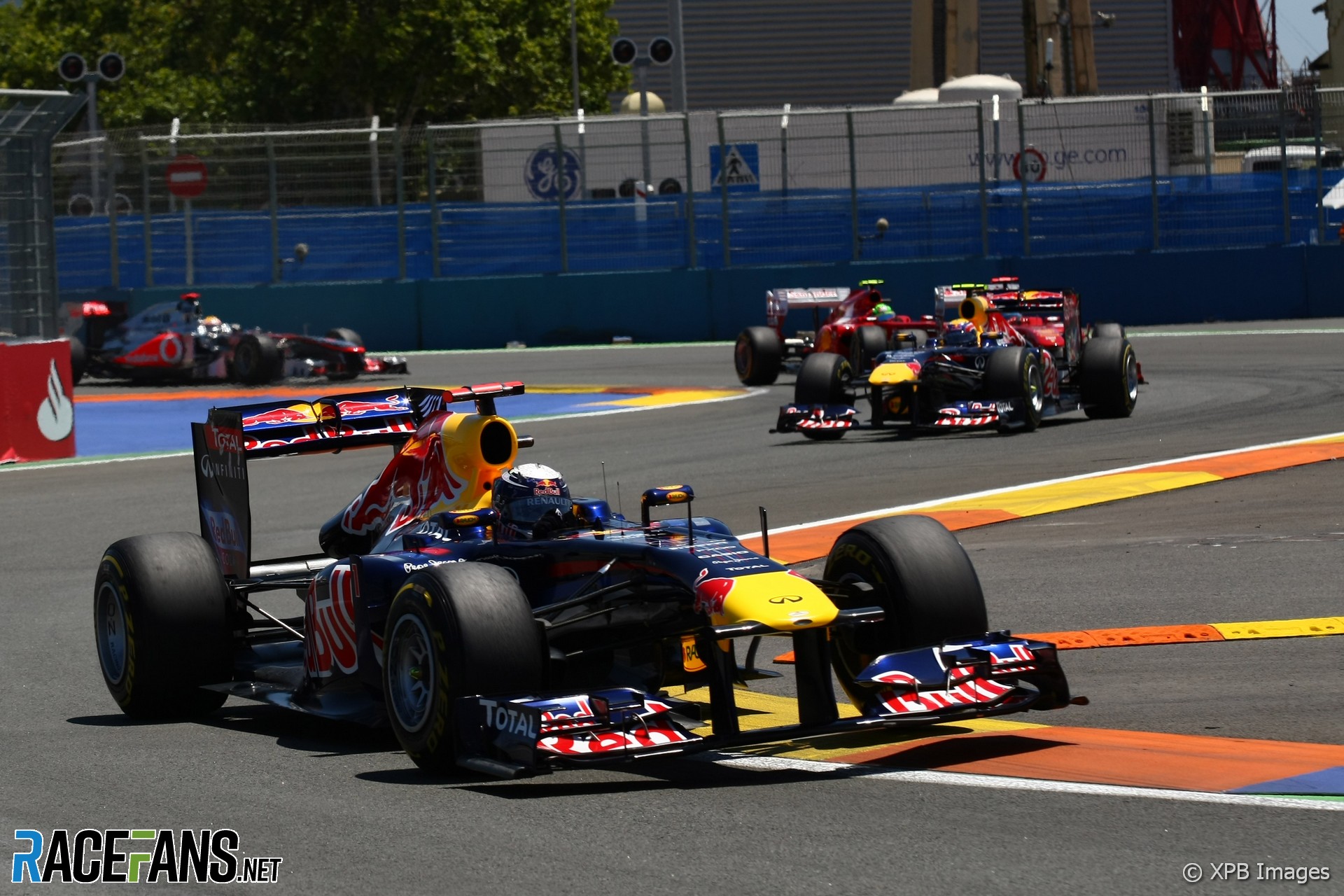 It was business as usual for Sebastian Vettel in the European Grand Prix.

The Red Bull driver rattled off 57 laps of Valencia with apparent ease to win his sixth race of the year.

Fernando Alonso split the Red Bulls to finish second as the challenge of the McLarens faded quickly.

Vettel held his lead at the start while Webber fought to keep back the fast-starting Ferraris.

It was Felipe Massa who made the best getaway and had a look down the inside of Webber at turn two. But he backed out of the move, allowing Alonso back through into third place.

Lewis Hamilton dropped to fifth behind the pair of them, with Nico Rosberg demoting Jenson Button for sixth.

Button fought back quickly, homing in on Rosberg through the DRS zones. On lap five he made a successful attack, slipping past the Mercedes at turn two.

Up ahead Alonso kept the pressure on the Red Bulls, especially Webber, who he was close enough to to use his DRS.

Hamilton was similarly close to Massa for a while before starting to fall back. He was the first of the front runners to make a pit stop, coming in on lap 11 for another set of soft tyres.

Ferrari decided to leave Alonso and Massa out for two more laps and brought Alonso in first, leaving Massa to lose a place to Hamilton.

The top three continued in the same order after their pit stops but Alonso was now even closer to Webber and took advantage of the DRS zone to pass him on lap 20.

Hamilton continued to drop back from the leading trio and made his second pit stop far earlier than his closest rivals, now focussing on keeping Massa behind for fourth. The other McLaren was in deeper trouble, Button losing his Kinetic Energy Recovery System halfway through the race.

Having passed Webber, Alonso wasn’t able to cut into Vettel’s lead, slipping back from the Red Bull driver. At the second round of pit stops Webber jumped back in front of Alonso again but he was destined to lose the position.

Webber made his third and final pit stop earlier than Alonso, but having switched to medium tyres he wasn’t quick enough and Alonso came out of his last pit stop back in second place.

The Ferrari driver came under pressure from Webber after his last pit stop as they picked their way past the battling Kamui Kobayashi and Paul di Resta.

But Alonso held his position and comfortably took second place as Webber was instructed to short-shift due to a technical problem later in the race.

Vettel made his final pit stop and held his position. Hamilton began his last stint six laps before Massa and was bring caught by the Ferrari driver over the final stint.

Vettel’s performance advantage was more comfortable on medium tyres and he crossed the line with a ten-second lead over Alonso.

Hamilton was too far back to capitalise but stayed ahead of Massa for fourth. Button had a lonely run to sixth after his KERS problem.

Alguersuari was the highest-placed driver to make just two stops, gaining ten places from his start position to finish eighth.

Adrian Sutil and Nick Heidfeld rounded out the top ten ahead of Sergio Perez. The Sauber driver started the race on mediums and made a single stop.

Remarkably, all 24 drivers finished the race, though only the top seven finished on the lead lap.

Michael Schumacher slipped to 17th after a costly collision with Vitaly Petrov following his first pit stop, Schumacher lost his front wing and had to do a whole lap with it hanging off.

Vettel’s sixth win out of eight means his championship lead is now more than three wins’ worth of points. By salvaging third place Webber is now tied for second with Jenson Button.

36 comments on “Sebastian Vettel dominates again to win in Valencia”