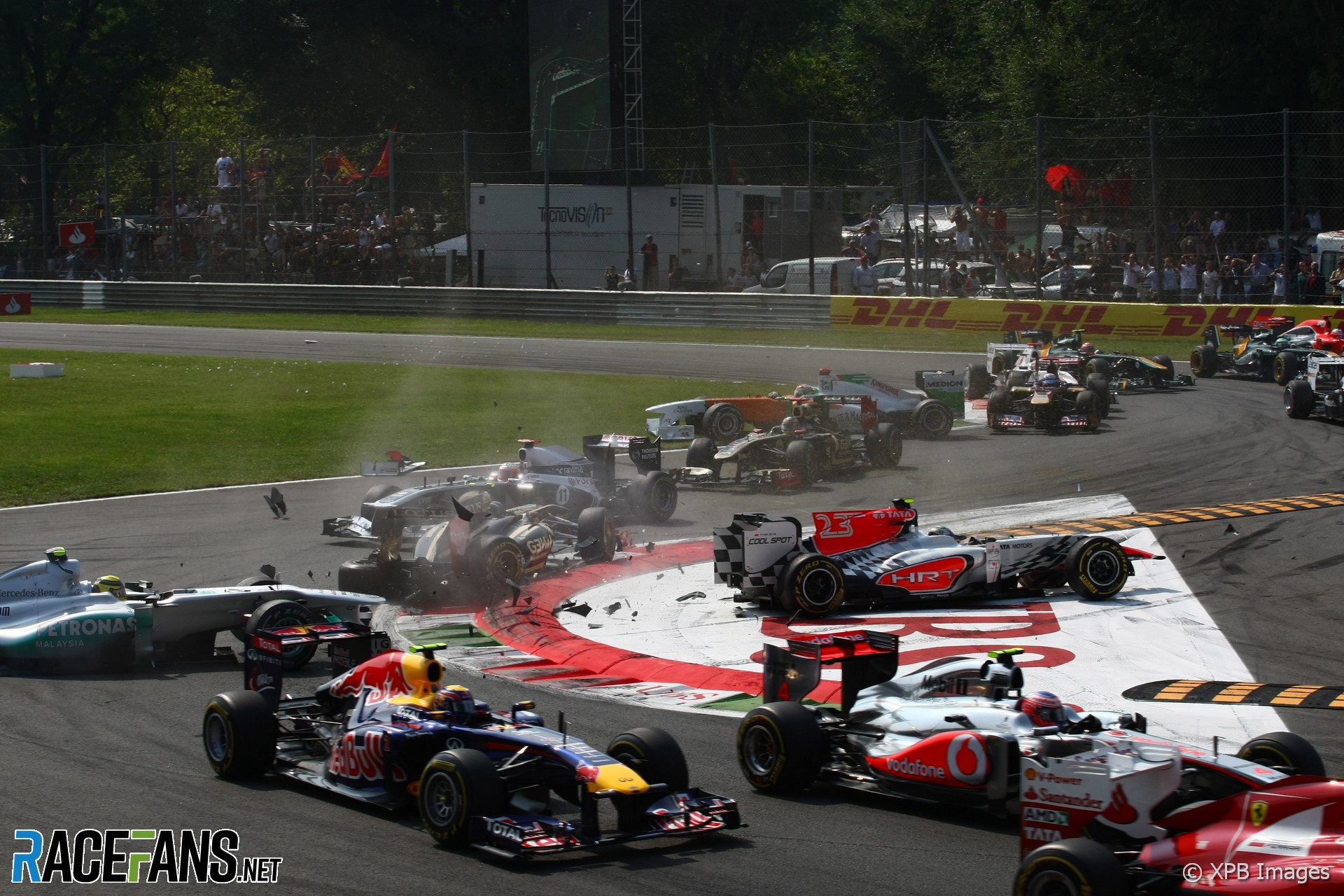 Sebastian Vettel can win the world championship at the next race following his eighth win of the year at Monza.

Vettel fell behind Fernando Alonso at the start but passed the Ferrari early on and pulled away.

Jenson Button took second place while Alonso held on to claim the final podium place in front of Lewis Hamilton.

Liuzzi causes chaos at the start

Alonso made a flying start to the race, vaulting up from fourth on the grid to take the lead. He dived down the inside of Vettel and Hamilton, the trio heading into the first corner side-by-side.

Alonso emerged in the lead ahead of Vettel, Hamilton and Michael Schumacher, who made another good start from eighth. But behind them a multi-car crash brought out the safety car.

Vitantonio Liuzzi had lost got onto the grass on the way to the first chicane, lost control of his HRT, and hurtled backwards into the cars negotiating the Rettifilio.

He took out Nico Rosberg and Vitaly Petrov and the wrecked cars blocked the track, causing Rubens Barrichello to come to a stop. The safety car was summoned while the marshals cleared the three wrecked cars from the track.

This brought a temporary halt to Vettel’s attempts to get his lead back from Alonso. But as soon as the race resumed the Red Bull was on the prowl, searching for a way around the Ferrari, looking down the outside of the della Roggia after the safety car came in.

Vettel soon drew along the outside of Alonso at the exit of Rettifilio, and put two wheels on the grass at Curva Grande as Alonso tried to squeeze him wide.

Vettel kept his foot in, held the inside line for the della Roggia chicane, and claimed the lead of the race. It was a fabulously brave pass and all the more impressive for being accomplished without DRS.

Alonso now briefly came under attack – but not from Hamilton. Schumacher had taken advantage of the restart to claim third off the McLaren. Hamilton later admitted he was too busy keeping an eye on the Mercedes in his mirrors to notice Alonso scampering off as the safety car came in.

This began a long, frustrating race for Hamilton who tried every which way to prise third place off the Mercedes.

On lap 13 he got past at the Rettifilio, but failed to cover the inside of the following chicane, allowing Schumacher through again.

As Schumacher’s tyres deteriorated Hamilton’s passing attempts became more aggressive. He tried to poke his nose down the inside at the Curva Grande but had to back out of the move. This allowed Button to pounce and take fourth place off his team mate.

He then proceeded to pass Schumacher with his first attempt on the outside of Ascari – a galling sight for Hamilton.

Schumacher came into the pits at the end of the lap, followed by Button on the next lap and Hamilton the lap after that. Button stayed ahead, but Hamilton was condemned to fall behind the Mercedes once again.

Hamilton launched another series of attempts to pass, often drawing alongside Schumacher through the DRS zone between Lesmo 2 and Ascari. Eventually, Ross Brawn warned Schumacher he was not leaving Hamilton enough room when moving to protect his racing line. Halfway through the race, Hamilton finally claimed back the place he had lost following the restart.

Hamilton began to close the gap to Alonso and Button. They switched to medium tyres at their final pit stops and Button capitalised on the Ferrari’s weakness on harder tyres to out-drag Alonso at the exit of Rettifilio and claim second place.

The other McLaren closed in quickly over the last stint and began the final lap one second behind Alonso. He had his DRS open heading towards Ascari but couldn’t get close enough to pass the Ferrari, crossing the line half a second behind.

Felipe Massa recovered to sixth place after an early tangle with Mark Webber. Webber had gone down the outside of Massa heading into the Rettifilio, but Massa squeezed the Red Bull driver onto the kerbs. From there, Webber could do little to avoid hitting the Ferrari.

Massa was able to continue but as Webber returned to the pits with damage the front wing folded under his front wing, sending him into the barriers at Parabolica.

This briefly promoted Pastor Maldonado to sixth place. But he was defenceless against his pursuers, led by Massa, who came past him one by one on the start/finish line using DRS.

Jaime Alguersuari claimed seventh place. Team mate Sebastien Buemi had been running behind him but slipped to tenth. The last driver to demote him was Bruno Senna, who made a bold pass from a long way back at the Rettifilio late in the race.

Maldonado and Barrichello finished out of the points. Four other cars were running at the end, including Daniel Ricciardo who was not classified having failed to get away at the start.

Heikki Kovalainen, Jarno Trulli and Timo Glock were the only remaining finishers on a day when the retirement rate was high.

Both Saubers retired during the race, Sergio Perez dropping out after running more than half the race on medium tyres. Adrian Sutil and Jerome D’Ambrosio joined them in retirement.

After his pass on Alonso, Vettel enjoyed a straightforward race at a track where Red Bull have struggled in the past. He described the win as “very emotional”.

“This circuit means a lot to me and has been very special. Obviously my first win here. So when I crossed the line I remembered every single bit and the podium is unbelievable. You stand up there and you feel so blessed because it doesn’t happen to many people.”

His eighth win of 2011 means he can win the world championship in the next race at Singapore.