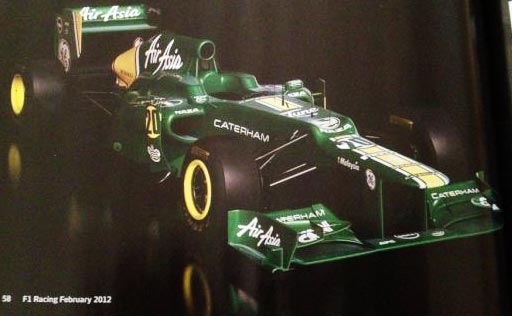 Most people who commented on the first pictures of the Caterham CT01 yesterday had the same initial reaction: it’s not a looker.

Its stepped nose, which became an instant subject of derision, is a consequence of new rules aimed at improving the safety of the cars. So will we see something similar on every new car this year?

We can expect much the same from Ferrari when their new car is revealed next week, according to Stefano Domencali: “It?óÔéĽÔäós not that pretty,” he said of the team’s new car, “because the shape defined by the technical regulations does not leave much scope.”

The man behind the CT01, Mike Gascyone, expects other teams to produce similar solutions: “I think you?óÔéĽÔäóll probably be seeing this type of nose on most of the cars this year.”

The rules now require the front portion of a car to be no more than 550mm high. But the section of the nose immediately behind it may be up to 625mm high. Therefore, assuming designers continue to prefer the aerodynamic gains offered by high noses, the CT01 will not be the only car to sport a distinctive snout.

In the coming weeks we will discover whether any of other designers have successfully married the rules on nose dimensions to a more attractive form.

It brings to mind the introduction of higher cockpit sides in 1996. They looked dreadful to begin with, but were eventually incorporated into car design in a much more subtle way.

But this is F1, and aesthetics are not going to have priority over performance. Ugly and fast trumps pretty but slow.

Of course, whether a car is “ugly” or “beautiful” is entirely subjective. Everyone has a different view of when F1 car design was at its best: whether it’s the aerodynamically complex creations of the mid-2000s, the low and wide cars of the mid-1990s, the squat turbo beasts of the eighties, the diverse machinery of the seventies, the tapered cigar tubes seen in the sixties or their front-engined predecessors.

But the stifling of innovation, coupled with some exacting technical specifications in the rule book, has combined to make the current cars look decidedly odd.

The 2009 aerodynamic regulations, introduced to increase overtaking, succeeded mainly in giving the cars an ungainly appearance rather than creating more passing.

The front and rear wings now have disproportionately odd dimensions – low and wide at the front, tall and narrow at the back – and the passage of three years has not made them more pleasing to the eye.

Add to that the stepped noses which may prove ubiquitous in 2012 and we have a decidedly unattractive new generation of F1 cars.

Hopefully some of the bright minds in other teams have devised more elegant solutions to the nose problem which will spare us from seeing a grid full of these awkward creatures.

If they don’t, it should still only be a temporary problem – albeit one we’re going to have to put up with in the medium-term. The proposed 2014 technical regulations will move the nose 300mm lower, which should give teams the opportunity to do away with this unsightly compromise.

The forthcoming rules change will also reduce the width of the front wings, which should also go some way towards improving the cars’ appearance.

But this is also a symptom of something more troubling: the limited scope for innovation and consequent lack of variety in modern F1. The ever-tightening rules are forcing convergence in car design upon the teams, to the extent where F1 increasingly looks like a single-spec series.

A view which is only going to be reinforced if there are 24 cars with alligator noses on the grid in Melbourne.