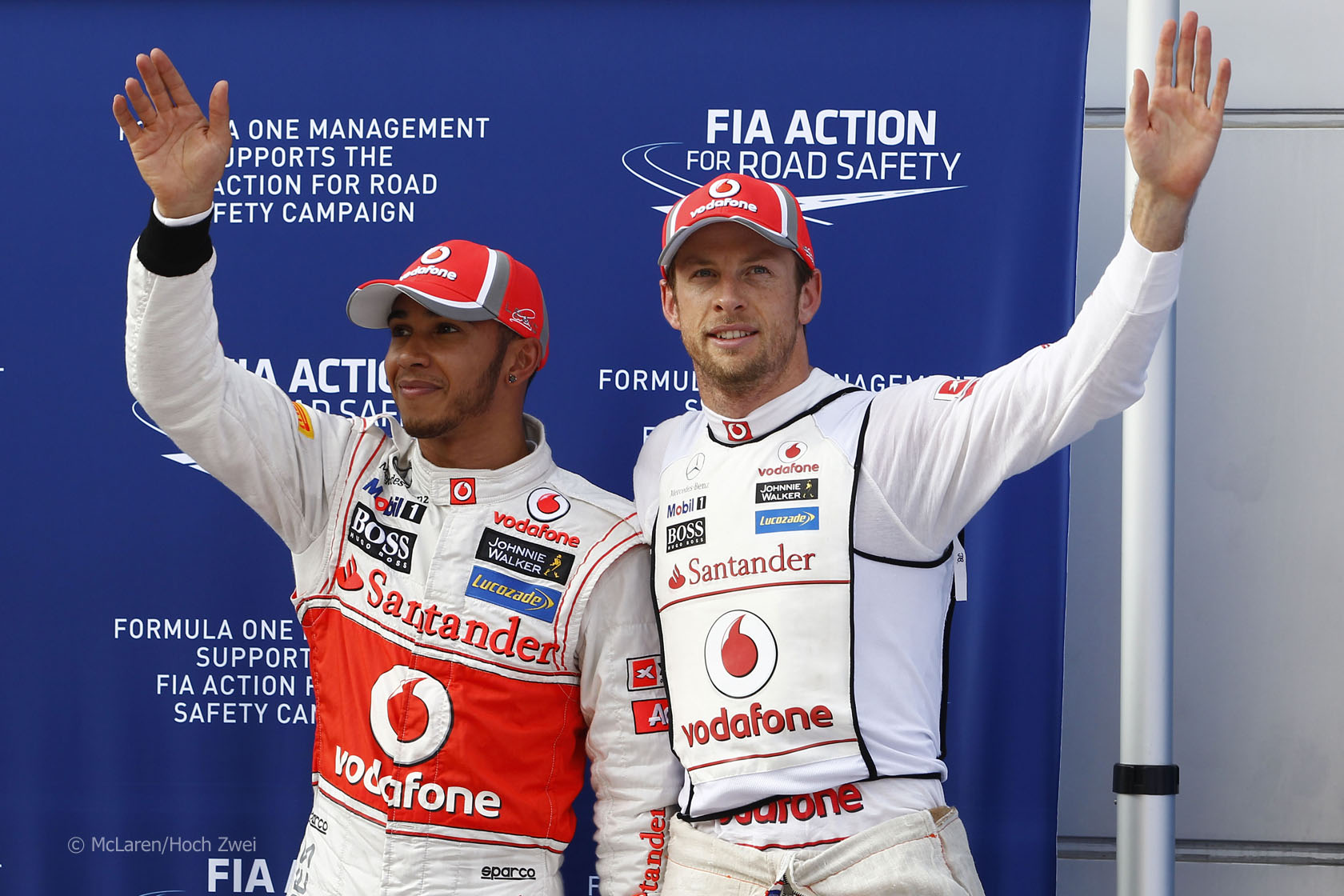 Lewis Hamilton put a McLaren on pole position for the first time at the Sepang International Circuit.

Team mate Jenson Button made it a McLaren one-two after relegating Michael Schumacher to third place with his final run.

Mercedes were quickest in the first part of qualifying until a group of drivers had to make second runs in a bid to ensure they reached Q2.

These included Mark Webber, who briefly fell as low as 17th before setting the fastest time of the session with a late run on the hard tyres.

Felipe Massa also had a scare: he was 18th after the first runs, 1.1 seconds slower than his team mate and facing the threat of elimination.

Both Ferrari drivers returned to the track for a second run on the softer medium tyres and Massa posted a big enough improvement to ensure his progression to Q2.

He made it at the expensive of Jean-Eric Vergne, who locked up his tyres at the start of his final lap and failed to make the cut.

Unlike last week, all the drivers were within the 107% time. Narain Karthikeyan was inside the target by three-tenths of a second.

Pastor Maldonado understeered off at turn 11 on his first effort which caused problems both for him and the cars immediately behind.

Hamilton was one of the first drivers on the scene and was anxious to ensure he wouldn’t get a penalty for going past the trouble spot too quickly. “I didn’t see any yellow flags,” he told his team. “We saw there was no time to react whatsoever,” they responded.

Maldonado and several other drivers who had to back off for the yellow flags needed to run again.

Massa’s last run temporarily got him into the top ten at the expense of his team mate. But Alonso’s final run and improvements from other drivers knocked Massa out of qualifying.

The Mercedes drivers left it until the dying moments of the session to secure their places in Q3, but did so comfortably. Raikkonen ended the session quickest.

Raikkonen was first to set a lap in Q1 but he took too much kerb at turn seven and was a tenth off his best lap from Q2.

He was beaten by both the McLarens – first Button, then Hamilton, who went quickest with a 1’36.219 despite locking his front-left tyre at the final corner.

The Mercedes drivers limited themselves to a single run. Rosberg had a slightly scruffy lap and took fourth, while Schumacher claimed second, just under two-tenths slower than Hamilton.

As was the case in Melbourne, Hamilton’s first effort proved quick enough for pole position. Button posted an improvement on his second lap which got him ahead of Schumacher – but not Hamilton.

Webber and Raikkonen set times that were identical to one-thousandths of a second – Webber claiming the place ahead as he set the time first. Raikkonen’s grid penalty means he will start the race tenth.

Vettel gambled on the hard compound for his second run and produced a quicker time, meaning he will start the race on the more durable tyres.