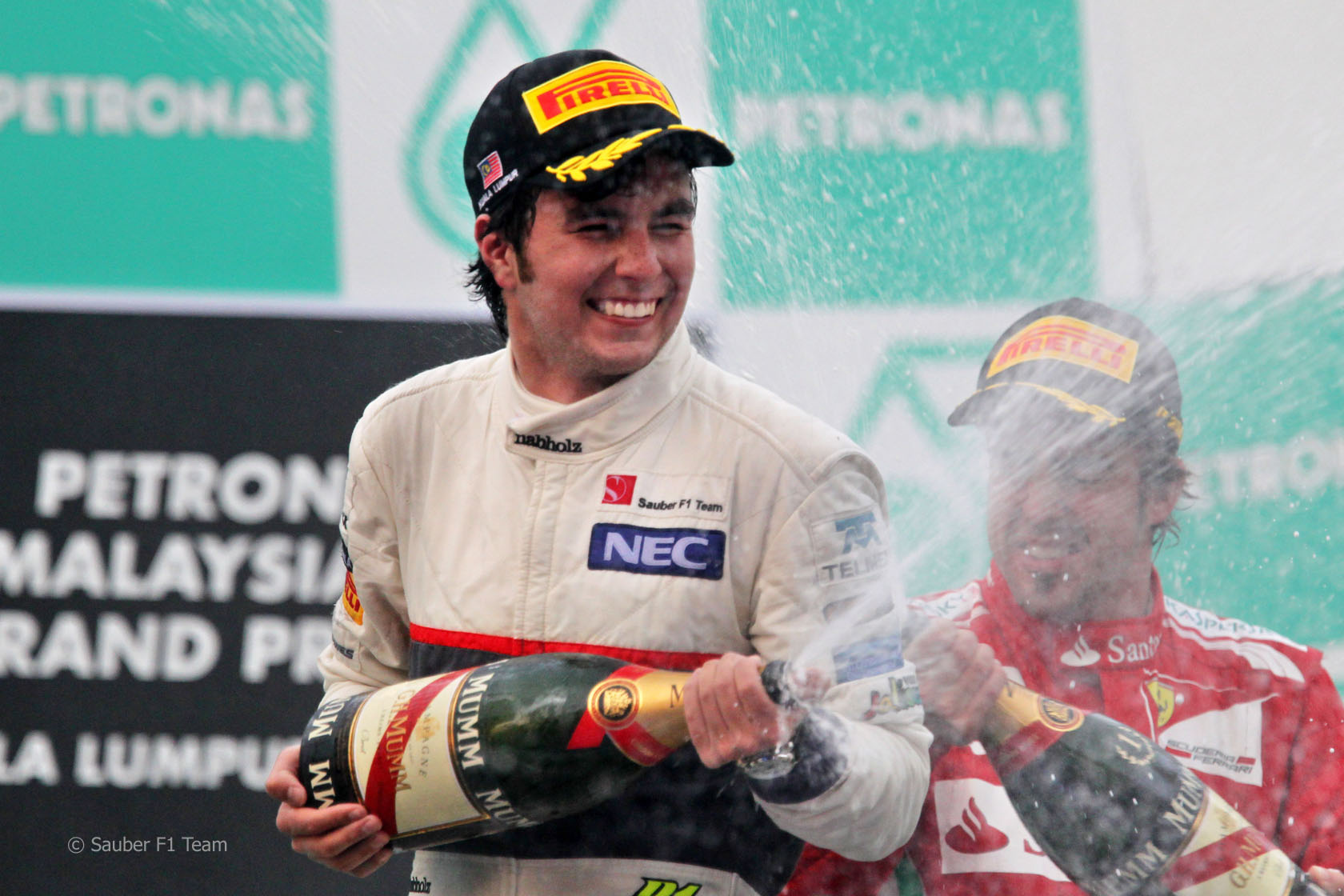 Sergio Perez scored his best result to date with second in the Malaysian Grand Prix.

It was the first time a Mexican driver has appeared on the podium since Pedro Rodriguez finished second in the 1971 Dutch Grand Prix for BRM – 19 years before Perez was born.

This was also the best result for Sauber as an independent team. They won the 2008 Canadian Grand Prix during their period of ownership by BMW, when they raced as BMW-Sauber.

They finished third as Sauber on six previous occasions, the last being with Heinz-Harald Frenzten in the 2003 United States Grand Prix.

Out of the 679 podium finishes for a Ferrari-engined car, this was only the third scored by a car that wasn’t a Ferrari. The others were David Coulthard’s third place for Red Bull in the 2006 Monaco Grand Prix and Sebastian Vettel’s win for Toro Rosso in Italy two years later.

Perez also led a race for the first time in his F1 career, becoming the 160th different driver to do so.

Fernando Alonso’s 28th Grand Prix win surely must be counted as one of his best. It moves him past Jackie Stewart’s tally of 27 and makes him the fifth most successful driver of all time in terms of races won.

He started the race from eighth on the grid, the second-lowest position he has ever won a race from. He won the 2008 Singapore Grand Prix from 15th, but the less said about that race the better.

This is the first time he’s won the same race with three different constructors: he won with Renault in 2005, McLaren in 2007 and now Ferrari.

Team mate Felipe Massa had a dreadful race and finished 15th. Having failed to finish in Australia, it leaves him 19th in the drivers’ championship behind both Marussias: Timo Glock has had a 14th place finish and Charles Pic has a 15th and a 17th. Pole position went to Lewis Hamilton for the 21st time in his career, giving him one more than Alonso and Damon Hill.

Despite starting both of this year’s races from pole position, he has only led for 14 out of the 114 laps.

Just two races into his comeback, Kimi Raikkonen has already added to his tally of race fastest laps. He has the third-highest tally of any driver with 36, behind Michael Schumacher (76) and Alain Prost (41).

Sixth for Bruno Senna was his best result so far. It gives Williams eight points, three more than they scored in the whole of last year.

Jean-Eric Vergne scored the first points of his F1 career with eighth place. He is the 320th F1 driver to score points.

Finally, Narain Karthikeyan equalled the highest position officially held by an HRT driver during a race. He was ninth on lap 13, a position he also occupied during last year’s Canadian Grand Prix. Pic also held eighth place for Marussia for one lap.

Spotted any other interesting stats and facts from the Malaysian Grand Prix? Share them in the comments.