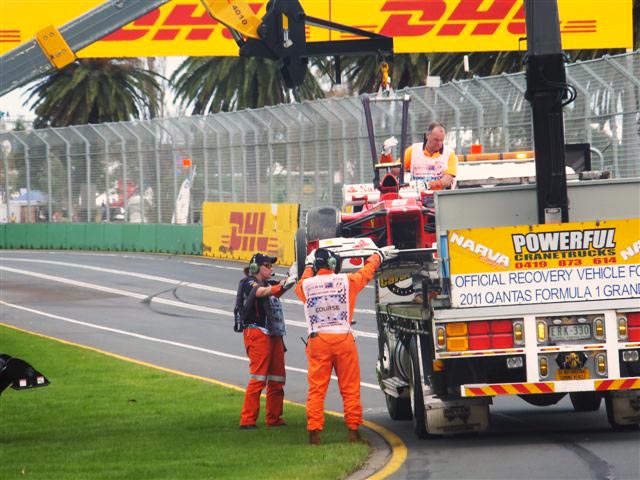 Jen Campbell worked on the recovery team at the Australian Grand Prix.

She spent the weekend recovering F1 cars including both Ferraris and Sebastian Vettel’s Red Bull.

Here’s her story from the first race weekend of the year.

I’m 22 years old and have been involved in motorsport my whole life. My father, uncle and sister got me into motor racing – there is a family joke that my first race meeting I officiated at was the 1988 Grand Prix at Adelaide when mum was pregnant with me!

Now I’m a member of the Vehicle Recovery team at F1 races. That basically involves cleaning up after accidents and returning the cars to the teams. It’s a pretty fun thing to spend a weekend as long as the drivers keep you supplied with dented cars to salvage.

I work at other race meetings in Melbourne and at Sandown and Phillip Island race tracks. Most of the time I’m in the recovery team but at Phillip Island I work on the grid, do pit exit and even get to start some races. I’m basically a jack of all trades.

You have to get your application to be a marshal at the Grand Prix in around October. My father is the deputy chief of recovery so I get to see some of the behind-the-scenes stuff, like team placements, organising trucks and drivers for the week and all of those fun, administrative things.

The Grand Prix week began the weekend before the race, where we got together with the chief of recovery and a few close mates and sorted out all the recovery gear into bags and trays to supply the trucks and cranes with what they need to complete their jobs properly. This is all conducted in true Aussie fashion, with a barbecue and some beers.

I began the preparations at the track with my dad on Wednesday. We took a lap around the outside of the track to put the equipment in the cranes and make sure they were in the right spots and had enough room in the officials’ ‘moat’ (the gap between the spectators and the concrete barrier) to move around and store cars if need be.

Problems with the Medical Car In the afternoon we prepared the radios and after that we were asked to man turn two for the FIA track test for their DigiFlags, control boxes, and the Safety Car and Medical Car. So off we went, me on the radio sitting in the shade, playing with the buttons on the control box.

Soon after we got a surprising call from turn 11, saying one of the cars had blown up, spitting metal parts and oil everywhere. At first we weren’t sure what had happened, as the local medical and safety cars were on the track as well.

To our surprise, the culprit was the F1 Medical Car – and it looked like an expensive engine blow-up. Fortunately they bring two to each race.

After the mess was cleaned up dad and I collected the KERS protection gloves. These consist of three layers, a cotton inner glove, rubber gloves that go to your elbows and leather rigger gloves to protect the rubber ones.

Then it was time for the Minardi two-seater to come out to play. Dad and I headed off to turn 15 to be ready in case it stopped (it did three times last year over various days).

To no-one’s surprise, it stopped again – gearbox trouble – so we picked it up on the crane truck and took it back to the team.

On Thursday my alarm went off at 4:44am: I had to be back at the track in half an hour in time for the briefing. Fortunately the morning session with the Minardi ran much more smoothly.

The track action at the Australian Grand Prix weekend begins on Thursday, although the F1 cars don’t hit the track until Friday. The support car schedule was packed with V8 Supercars, Carrera Cup Porsches, Group A and C Touring cars and a Historic demonstration with a whole lot of old cars driving around the track at pretty quick speeds.

We also had the Red Bull Race-off which provided the best racing off the weekend, with drivers spearing each other off and whatnot in identical Renault Meganes.

Then there was the Ultimate Speed Comparison, with Gary Paffett in the 2011 McLaren versus Scott Pye in the Triple 8 V8 Supercar and Mick Doohan in a Mercedes road car. You know the drill: the cars get let off at time intervals with the idea being all three cars cross the line at roughly the same time.

Despite all that action, we were left with little recovery work to do on the first day.

A Ferrari on the flatbed

We were excited ahead of Friday as the Formula 1 cars would hit the track for the first time in anger this season. Briefings done and KERS glove allocation completed, we headed off to turn two.

F1 practice started just after noon and we were ready for the fun. And we were soon to be rewarded as the first car we collected was from one of the big teams.

Felipe Massa arrived at turn nine going backwards and was brought to a stop by the gravel trap. This was a big moment for me – I’ve had Toro Rossos and Force Indias on the flatbed before, but this was my first Ferrari.

No team likes their cars’ secrets being revealed when they stopped on the track. But Ferrari seemed especially paranoid about covering up their cars.

As we lifted the F2012 they concealed the underside to stop photographers getting sneaky snaps. Michael Schumacher did much the same with his Mercedes’ front wing when he spun in final practice.

In the second session Narain Karthikeyan came to a stop and we plonked the HRT on the truck. Along with a Formula Ford car in the intervening session we’d recovered three in one day – busier than usual.

We had stopped at turn six to recover the Formula Ford car and donned our jackets as it began to rain lightly. That done, we drove on and as we reached turn eight the track was soaked.

By turn ten it was bucketing down. With our windscreen wipers on full blast we could only barely see what was happening.

Another recovery crew stood soaked at turn 11 having failed to get their jackets on in time. We happily waved and tooted our horn at them (as you do) and cruised around.

By the time we got back in at turn 15 it was back to spitting rain and sunshine. Melbourne weather at its unpredictable best.

Saturday brought another quarter-to-five alarm call as we were on Minardi two-seater duty again.

All weekend long I had been hoping for the chance to pick up Sebastian Vettel’s car. Much to my surprise, it happened in final practice.

Heading into turn six during final practice the world champion put a wheel on the grass and pirouetting into the gravel. We loaded the Red Bull RB8 onto our truck and set off for the pits.

We were excited, hanging out of the truck window with index fingers pointing to the sky in true Vettel style. Some of the crew took pictures as we drove past.

Red Bull were very polite when we got back to them and didn’t seem too worried about the undertray of the car either. We even got a big thank you from the team for bringing the car back, which always makes you feel appreciated.

Soon it was time for qualifying, so we all got in the truck, and kept an eye on the live timing.

Fernando Alonso was the next big name to spin into the gravel, which gave us the chance to complete our set of Ferraris and have another run-in with the Italians. After we unloaded their car, we stopped at pit exit and watched the V8 Supercars race on the big screen there.

Sunday started with a luxuriously late 7:30am alarm call: no peak hour traffic to contend with and no Minardi two-seater either.

Race day anticipation was setting in and most were dreaming of a Mark Webber win or even a podium for Danny Ricciardo podium. Unfortunately both made poor starts, though both went on to score points.

Vitaly Petrov came to a stop on the main straight, prompting race control to deploy the safety car which another crew recovered the Caterham.

This was the correct call. The left hand side of his car was still on the racing surface, even only a little. It could have posed a danger being parked there and needed to be moved for everyone’s safety.

Petrov’s car was stopped just after the beginning of the DRS zone and potentially in the firing line from anyone losing control coming out of the final corner – as Adrian Sutil did in qualifying last year. It’s not a high chance, but leaving the Caterham parked there would not have been safe in my opinion.

The recover truck was stationed at turn 13. To get it to the car without the field under control of the safety car would be unacceptable and dangerous to the crew of the truck. So the safety car was a must.

With all recoveries we did that weekend and have done at other meetings, we try to keep ourselves as safe as possible. For gravel trap recoveries, which are usually less dangerous, they are done under local sector yellow flags.

We use skeleton crews for recoveries – only the people that are needed, no hangers-on or people doing nothing. We always have someone keeping watch in case something happens, to give a warning. And recovery vehicles are parked ‘in line line of fire’ to keep them from hitting the rescue team – you can see this in the video of Petrov’s recovery above.

When the race finished we went to get Rosberg’s car from pit exit. But just as we were ready to go, the Mercedes crew arrived to wheel it back themselves – they were very concerned about their car’s floor being seen by others. We were later told by others that Force India had also been anxious to keep their floor covered up.

After the clean-up we went to the after-party at the Muster tent, where an award is given to the the best team – Sector Start/Finish won this year.

It was another great race weekend in Melbourne. The hours are long but working with a great team, bring so close to the action and getting such rare experiences makes up for it.

If you’ve ever thought of giving marshalling a try I strongly recommend it – get in touch with your local motor sports association.

72 comments on “Tales from a Melbourne marshal”