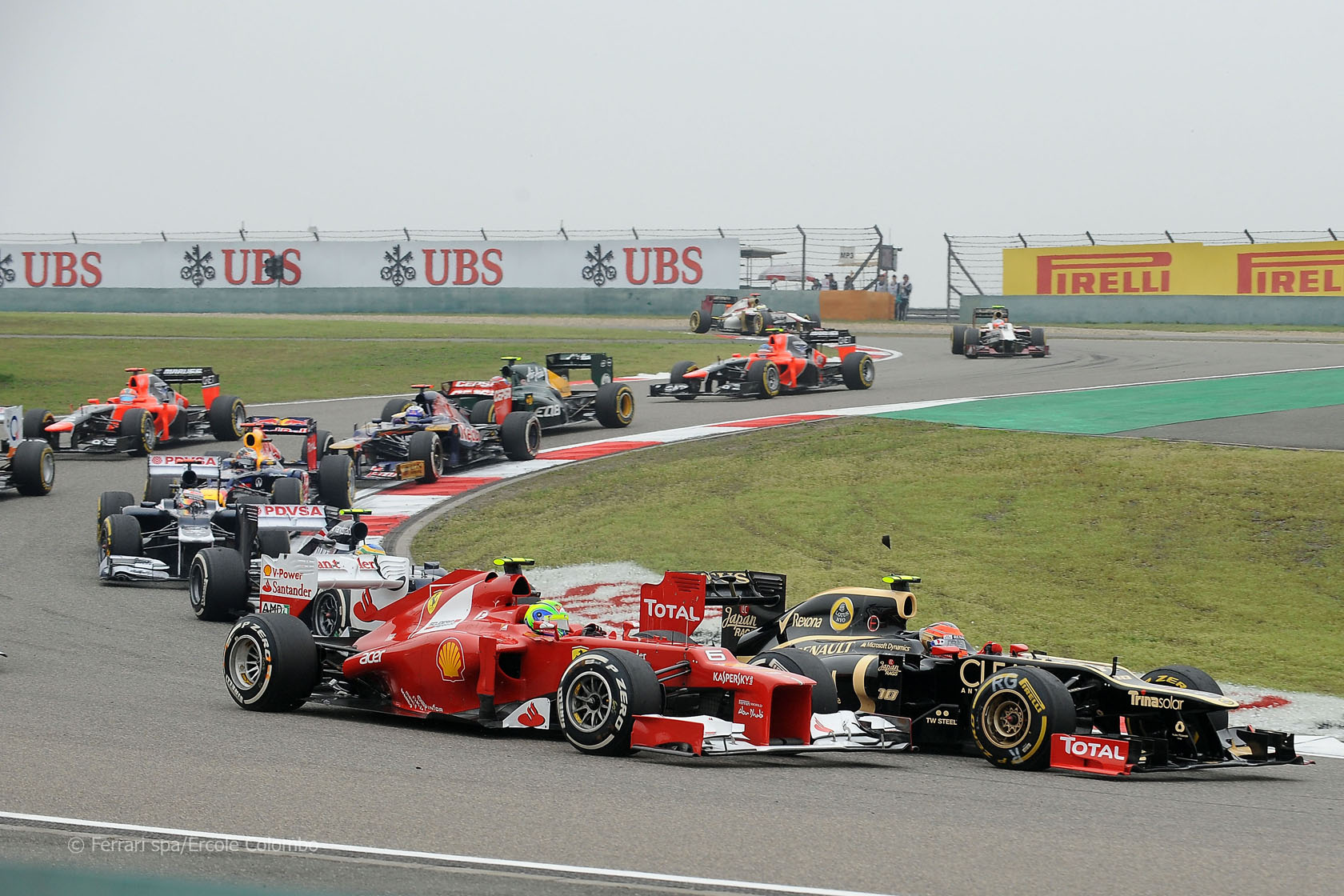 Which driver had the best race weekend in China?

Compare all the drivers’ performances below and vote for who you think was the best driver of the Chinese Grand Prix weekend.

Sebastian Vettel – Reverting to the older-specification RB8 exhaust didn’t help Vettel’s cause. He had the sector times to get into Q3 but fell short by a few hundredths of a second. From 11th, he slipped back at the start as he took care to avoid the Williams pair. Much like last year, a two-stop strategy left him vulnerable at the end, as he dropped from second to fifth.
Mark Webber – Stuck with the newer exhausts and ended lap one in ninth after a customary sluggish getaway. Despite flying through the air after going off at turn 13, and running wide while trying to pass Raikkonen, he made an aggressive three-stop strategy work and passed his team mate for fourth with two laps to go.

Jenson Button – Couldn’t find grip in cool conditions during practice and was sixth in qualifying. Made a strong start to claim third, and made light work of traffic on his three-stop strategy. Was poised to attack Rosberg in the final stint when a slow pit stop dropped him back into traffic, and forced him to settle for second.
Lewis Hamilton – A gearbox change penalty turned second in qualifying into seventh on the grid. Nonetheless he moved up two places at the start and spent a busy race usually trying to find his way past another car. Seemed more circumspect in his approach, particularly with Massa and Perez, and lost some time which meant he was unable to capitalise on Button’s problem. But another third place gave him the championship lead.

Fernando Alonso – There was no opportunity for heroics this time. Alonso qualified ninth and finished there after going off while trying to pass Maldonado.
Felipe Massa – Started 12th and lost a place during the course of the race (despite Schumacher’s retirement). Massa viewed this as “a step forward compared to the first two races of the season”.

Michael Schumacher – Just as the W03 came good, the margin Schumacher had enjoyed over Rosberg in the first two races vanished. A 0.6s deficit in qualifying looked more like the situation last year. He lapped slower in the opening stint, but whether this was an act of tyre conservation that would have benefited him later on is something we’ll never know. He retired after his front-right wheel was not fitted correctly at his first pit stop.
Nico Rosberg – Led the Chinese Grand Prix for the third year in a row – only this time he won it. His pole position lap was superb, and he was confident enough to get out of his car before the end of the session, knowing pole was his. His team scrutinised his tyres after every pit stop for signs of the degradation they’d seen on Friday. As the race wore on it gradually became clear Rosberg had the car to win, and Button’s pit stop trouble sealed the deal.

Kimi Raikkonen – Didn’t complete any high-fuel running on Friday as Lotus struggled to get on top of the cool temperatures and their latest upgrade package, much of which was scrapped. Started fourth but ran into tyre trouble while two-stopping, plummeting ten places down the order in two laps and limping home 14th.
Romain Grosjean – A solid run to sixth was just the tonic he needed after completing only four laps in the first two races. Made his two-stopper work, and not just because his last stop was four laps’ later than Raikkonen’s. Time lost at that stop – and running wide at turn seven – showed he could have finished even higher.

Paul di Resta – A lowly 15th for the highest Force India on the grid shows how the team’s fortunes have changed. He couldn’t continue his points-scoring streak in the race, finishing behind the Saubers.
Nico Hulkenberg – Wheelspin at the start meant he slipped to 17th behind Kovalainen and damaged his nose. Lap ten repairs left him last, but a two-stop strategy allowed him to finish ahead of the Toro Rossos. However he couldn’t find a way past the struggling Raikkonen. Kamui Kobayashi – Sauber went into the weekend looking for better qualifying performance and found it – Kobayashi started third. But did it come at the expense of their race pace? Both drivers finished lower than they started. Kobayashi lost four places on lap one and his three-stop strategy dropped him back further. He ended the race tenth after defending strongly from his team mate.
Sergio Perez – Mystified by the sudden onset of understeer in qualifying as the track temperatures fell. But he made a good start, moving up two places and passing his team mate. Sauber switched him to a two-stop strategy as they began to doubt whether Kobayashi’s three-stopper was working. But a clutch problem at his second stop dropped him back behind his team mate and, ultimately, out of the points.

Daniel Ricciardo – The Toro Rosso pair found themselves scrapping to reach Q2, and again it was Ricciardo who came out on top. He spent the opening stint being held up by Hulkenberg and dropped back during the race.
Jean-Eric Vergne – Elected to make wholesale set-up changes and start the race from the pits. It paid off, and he was the fastest driver on the track for 10 out of 11 laps towards the end of the race as he lapped on soft tyres. He overhauled his team mate and caught the Raikkonen-Hulkenberg battle by the end of the race. Pastor Maldonado – Edged his team mate by a tiny margin in qualifying but lost two places at the start. Shadowed Senna throughout the race and finished a second behind, claiming his first points of the year.
Bruno Senna – Missing first practice turned out to be no great loss due to the rain. Made a good start but clipped Massa’s Ferrari, damaging his front wing. Like Maldonado, good pace on a two-stop strategy moved him up the order ahead of, among others, the two Ferraris. Passed the tyre-troubled Raikkonen but was demoted by Grosjean on the same lap for seventh.

Heikki Kovalainen – New technical director Mark Smith’s first race on the pit wall didn’t go entirely according to plan – Kovalainen lost time with an unspecified problem at the back of the car which left him last.
Vitaly Petrov – Was pleased to finish on the same lap as the leaders in a race that didn’t feature a safety car.

Pedro de la Rosa – 107% rule fears now look to be a thing of the past, but de la Rosa was still around a second per lap off the Marussias in the race.
Narain Karthikeyan – Was around 40 seconds behind de la Rosa before falling further back when he was lapped for the second time.

Timo Glock – Briefly held 18th at the start before being demoted by Petrov and the two Toro Rossos. Avoided being lapped until the very end of the race – when he lost so much time he was almost passed by Pic.
Charles Pic – The team took the canny decision to call Pic to drive through the pits on lap 48 without stopping, allowing the leaders to pass without costing him too much time. Until that point he had been around ten seconds behind Glock – he crossed the line less than half a second behind his team mate.

Who was the best driver of the Chinese Grand Prix weekend?