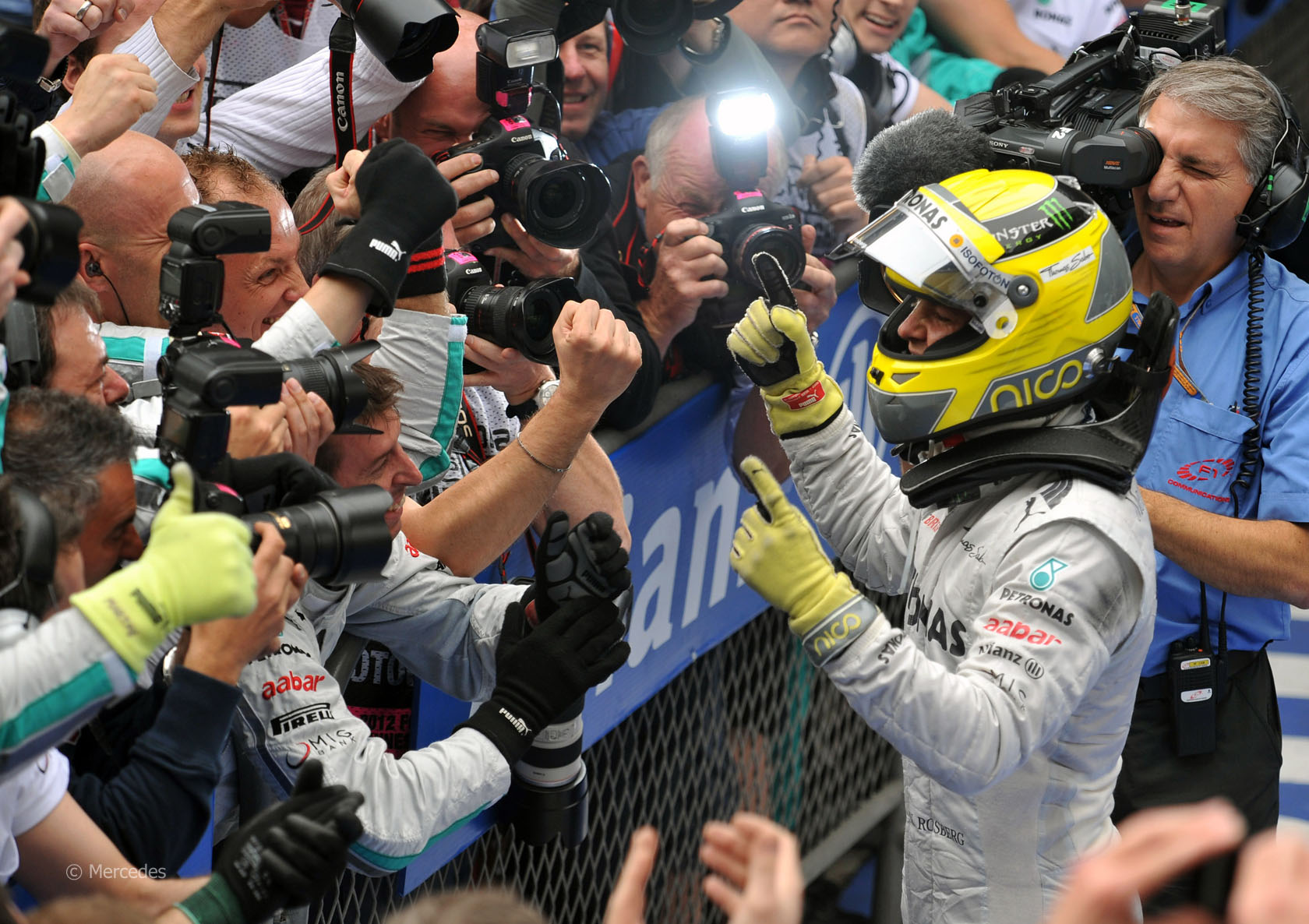 Nico Rosberg was emphatically voted Driver of the Weekend for the Chinese Grand Prix after scoring his first F1 pole position and win.

The Mercedes driver gathered a comfortable majority of votes over Lewis Hamilton and Jenson Button.

The scope of Rosberg’s victory is reflected by the proportion of votes with third in the poll Button getting over ten times fewer votes than the Mercedes driver.

Rosberg waited 110 Grandd Prix to get his first ever pole position in F1. He secured it on Saturday in Shanghai with a superb lap.

When the lights went out on Sunday, he maintained the lead from his team mate Michael Schumacher and never looked back to get his first ever and very deserved F1 victory.

I can’t even contemplate voting for anyone other than Nico.

His qualifying lap was simply mesmerising to watch. Absolutely perfect, and a strong hit back after his previous mistakes in Q3.

And of course he won the race. His strategy was right and off the top of my head, I can?óÔéĽÔäót think of one mistake he made the whole weekend.

I can?óÔéĽÔäót vote for anyone other than Nico. Mesmerising in qualifying, on top form in the race, and credit to the Mercedes engineers for sorting the tyre woes for the weekend.
Matt

Rosberg, without a doubt. He drove a solid race and didn?óÔéĽÔäót buckle under pressure.

He drove almost flawlessly during the race and continued to set competitive times right to the very end which is a tribute to his ability to look after the tyres this weekend. His qualifying lap was very smooth so all in all he was the driver of the weekend for me.
AndrewTanner

Can’t be anyone else but Rosberg. There were other drivers who had a good weekend, but no one but Rosberg deserves to win this poll. Rosberg put in a superb qualifying lap and was almost faultless in the race.
Slr

Hamilton qualified behind Rosberg but penalty for gearbox change saw him starting seventh.

He moved up at the start and spent the majority of the race in the traffic cautiously fighting with other drivers. He managed to finish the race third for the third time in a row which gave him the championship lead.

I voted Hamilton for the first time this season. Good qualifying performance to stick it in second. Wasn?óÔéĽÔäót his fault he got the penalty, but didn?óÔéĽÔäót let it stop him from getting another podium.

He was always in more traffic than Button, so didn?óÔéĽÔäót really have much of a chance to pass him. When he did get clear air behind Button he started slowly closing, but then had to pit and was behind more traffic. Fantastic performance that had me on the edge of my seat.
James

He had problems with grip in practice and qualifying sessions but made up a few positions at the start. He looked strong to challenge for the win, but a ill-fated pit stop eventually destroyed his chances.

Button. Because if it weren?óÔéĽÔäót for the pit problems he could have attacked Nico (and make sure he would have passed him eventually). Well deserved win by Rosberg anyway
OmarR-Pepper

Rosberg was the third different driver voted Driver of the Weekend in three polls so far.

Jenson Button is in the top three for the second time this year, while Lewis Hamilton – for the first time.

The Driver of the Chinese Weekend poll brought the greatest gap between the first and second place since 2011 German Grand Prix when Lewis Hamilton got over 76% of votes.