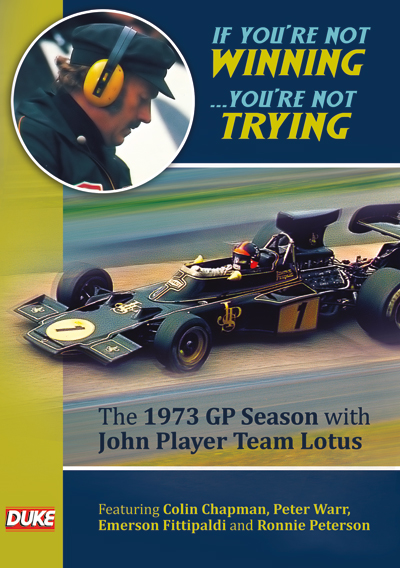 “If you’re not winning …you’re not trying”, the insightful documentary on Lotus’s 1973 world championship campaign, has been re-released on DVD by Duke Video.

The video gives a first-hand account of most of the season’s races from a perspective far closer than any film crew is likely to get these days. We hear from team owner Colin Chapman and manager Peter Warr, and see them discussing set-ups and tactics with drivers Emerson Fittipaldi and Ronnie Peterson.

The film reveals the tension of following a race in the days before live sector-by-sector timing and pit walls festooned with TV screens. The first a team learns of a driver hitting trouble is when he fails to come around at the start of a lap.

It also shows a camaraderie between team principals that has been eroded by the intensity of modern F1 competition. Chapman and Ken Tyrrell, the men whose cars won most of the races that year, are often seen sharing a joke.

There is much candid footage of Colin Chapman making the kind of blunt assessment of his drivers that you would never hear from one of today’s team principals.

Asked if Peterson should be sent out during practice at Monaco Chapman replies, “no, he’ll only wreck the thing” and tells the mechanics to give Peterson the same settings Fittipaldi is using as “he’ll drive whatever we give him”.

Later on Chapman remonstrates with Jean-Pierre Jarier, a future driver of his, for dragging gravel onto the circuit ahead of the start at the Osterreichring.

The race footage isn’t comprehensive but it shows some interesting moments and angles – including a view of the first-lap shunt at Silverstone that year which came close to wiping out the cameraman.

The tragic end to that year’s championship means the film has a poignant end. There is a dreadful sense of the unfolding horror at Watkins Glen as drivers return to the pits with grim news about Francois Cevert.

This film gives a fascinating glimpse into how the sport was almost four decades ago – still amateurish in so many ways, but with visible first vestiges of the coming era of ultra-professionalism.

It’s a shame the publishers didn’t take the opportunity to add to it for its DVD release, by way of new interviews or a DVD commentary. It could have helped add to the aspects of the season which are not well covered by the narration, such as Fittipaldi’s growing unhappiness which caused him to move to McLaren for 1974.

That aside, this is a video that any fan of the period would enjoy. For those that are, make sure you check out Warr’s recently-released memoirs as well.