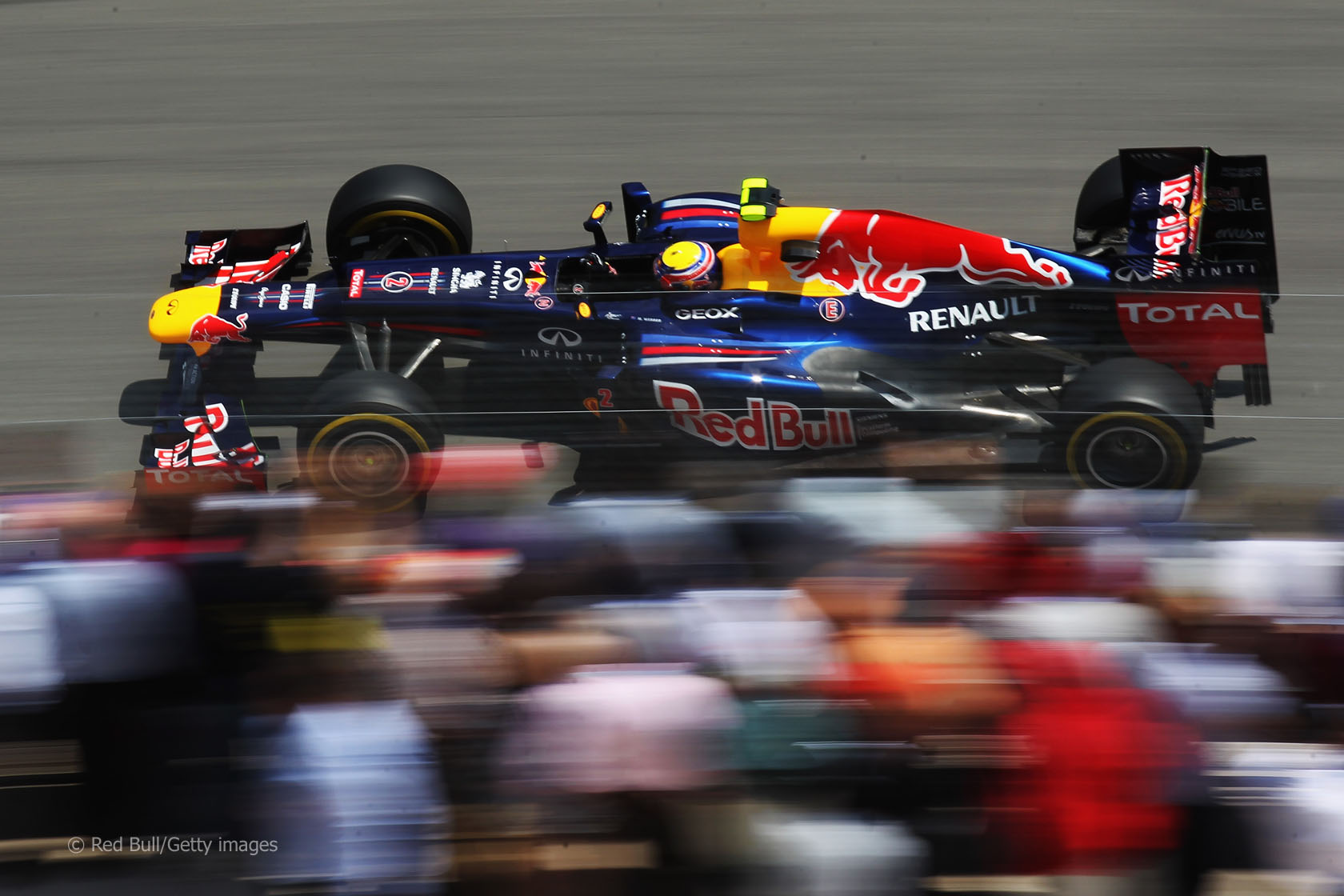 Red Bull are on pole position for the third year in a row at Monaco.

But unusually it’s Mark Webber who lines up at the sharp end rather than Sebastian Vettel, who’s taken the lion’s share of the team’s pole positions.

Webber is aiming to repeat his 2010 pole-to-win feat and give Red Bull their third consecutive victory in the principality.

The first moments of the race are even more crucial in Monaco because of the difficulty of overtaking here. Going on past form, we could be in for an exciting start.

Webber hasn’t got a record of particularly good starts this year. In the first five races he’s lost a total of seven places on lap one.

The problem for those lining up behind him is they won’t have much chance to capitalise on it. The narrow, curved run to the first corner is just 300m long and Webber’s car will be positioned on the inside.

The driver who starts second usually has worry more about keeping his position than gaining one. Only once the the last four starts has the driver who started third failed to take second. That was slow-starting Webber, last year.

Lewis Hamilton may be only third on the grid but he has a decent chance of getting in the mix with Webber and Rosberg at the start.

Strategy at Monaco has always been making as few pit stops as possible, limiting your vulnerability to being jumped from behind.

This was the policy Vettel pursued last year, pitting for softs on lap 16 and attempting to run until the end.

It left him with a lot of defending to do and whether he might have kept Fernando Alonso and Jenson Button behind in the final laps without the red flag – and the opportunity to change tyres – is one of the great ‘what ifs’ of last year.

Strategy therefore becomes a questions of who will dare to pit first for soft tyres – and whether they will try to make them last until the end. This will partly come down to who can find clean air to drop back into at their first pit stop.

As well as being on pole, Red Bull also have the best-placed car which has the choice of tyre to start on. Vettel, who starts ninth, said: “We could be on a different strategy tomorrow as we?óÔé¼Ôäóre able to start the race on hard tyres, slightly different to the cars ahead, so we?óÔé¼Ôäóll see how the first stint goes and go from there.”

As ever, the narrow confines of Monaco increases the chance of a safety car deployment, which would make life very difficult for the strategists.

Felipe Massa made it into Q3 for the first time this year and reckoned he could have beaten his team mate: “I could definitely have done even better than this seventh place: fifth was within my reach, given what we saw in Q1 and Q2.

“Unfortunately, in Q3 I did not manage to get a perfectly clean lap because of traffic, but that?óÔé¼Ôäós an easy thing to find here.”

The lap which ultimately put Webber on pole did not get off to a promising start – he was only 11th-quickest in the first sector.

Romain Grosjean believed his slow middle sector cost him a chance of pole position: “I did a very good lap in the first part of Q3 but then I couldn?óÔé¼Ôäót improve on my second set of tyres.

“This was a shame because our strategy was perfect for the last part of qualifying. The traffic wasn?óÔé¼Ôäót too bad but I missed out in sector two. I think pole position was within reach.”

Your view on the Monaco Grand Prix

Mark Webber take his second victory in the Monaco Grand Prix? How will Michael Schumacher fare after being relegated from first to sixth on the grid?

And what progress will Pastor Maldonado and Sergio Perez make from 19th and 24th? Have your say in the comments.