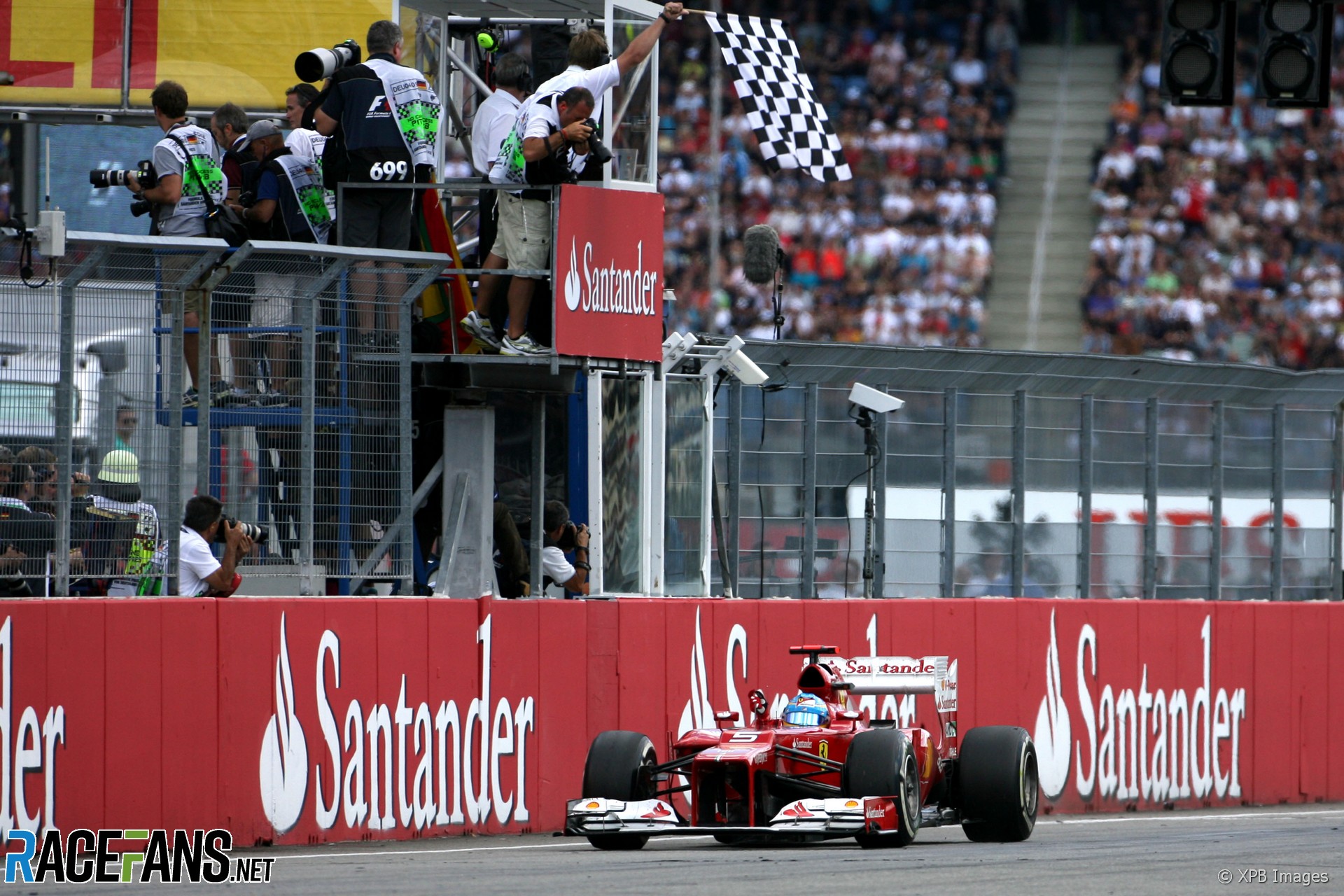 Fernando Alonso scored his third victory of 2012 in the German Grand Prix.

The Ferrari driver controlled the race from the start despite coming under attack from two different drivers over the course of 67 laps.

Sebastian Vettel took second place off Jenson Button on the penultimate lap of the race.

Vettel doesn’t let Alonso get away

The top four drivers held position at the start but Vettel had to fend off a strong attack from Michael Schumacher at the hairpin. That gave Alonso the chance to make his escape.

Nico Hulkenberg held fourth and Button appeared behind him having picked off Pastor Maldonado.

Vettel quickly shook off the Mercedes and went after Alonso. By lap four he had the gap down to just six tenths of a second but wasn’t able to launch an attack on the Ferrari ahead.

Meanwhile Button was making progress. On lap eight he used DRS to attack Hulkenberg, squeezed down the inside of the Spitzkehre hairpin and captured fourth place.

Three laps later he repeated the move on Schumacher for third, and pressed on in pursuit of Alonso and Vettel.

By this point the race had already gone disastrously wrong for the other McLaren. Lewis Hamilton had dropped a position to Mark Webber at the start, but that was the least of his problems.

As the cars came around to begin lap two the first turn was littered from a collision which removed Felipe Massa’s front wing.

It seemed inevitable someone would collect a puncture and so it proved. Hamilton twitched wide onto the run-off as his left-rear began to deflate. A slow lap back to the pits destroyed his race.

The rules allow for the cars to be directed through the pit lane during a safety car period which might have avoided the incident. But Hamilton had no objections to the decision not to do this: asked if they safety car should have been summoned, he simply answered “no”.

While Hamilton was slipping back Paul di Resta took the opportunity to nip past Kimi Raikkonen. But it didn’t last – Raikkonen took the place back on the outside of lap eight a few laps later.

Shortly afterwards both were in the pits – di Resta ducking in first on lap 11, Raikkonen the next time by to cover the Force India. This sparked off a sequence of defensive pit stops from other drivers but not the lead trio of Alonso, Vettel and Button.

Nor did either of the Saubers pit just yet. Sergio Perez had made excellent progress from 17th on the grid passing Daniel Ricciardo, Kamui Kobayashi and di Resta.

“We stay out,” said his race engineer. “Some people are pitting but it’s too early, Checo.” He eventually came on in the 18th lap, by which time the leaders were also being told to up their pace in anticipation of their first stops.

Hamilton a headache for the leaders

Alonso came in first on lap 19, discarding his soft tyres for mediums. Button came in on the next lap and did the same, as did Vettel on the lap after that.

Both Alonso’s pursuers were quicker than him at this phase of the race and Vettel started to draw back in range once again. By lap 31 the gap was down to six tenths of a second again.

At this point the cards fell in Alonso’s favour. Coming around to lap Charles Pic the Ferrari driver was able to open his DRS and pull ahead of Vettel, who was unable to clear the Marussia before they reached the Spitzkehre hairpin.

Vettel then had more trouble with an unlikely backmarker: Hamilton. The McLaren driver had emerged from his second pit stop in front of the leaders and was obliged to them past because of the blue flags.

But he was clearly quicker on his fresher tyres and was able to unlap himself from Vettel. The Red Bull driver, who was struggling with a KERS glitch, was not much impressed.

“I don’t see the point in him trying to race us,” said Vettel afterwards. “It is a bit stupid to race the leaders.”

He might have been less put out had Hamilton done the same to Alonso, but Hamilton couldn’t quite make it past the Ferrari, who edged off his line occasionally to dissuade Hamilton from making a move.

While Alonso grappled with Hamilton, the other McLaren made for the pits.

He might have done so with gritted teeth a few races ago when McLaren seemed incapable of making a clean pit stop. But these days it’s as if a different crew are changing the tyres and Button was stationery for just 2.31 seconds – a new record.

This was bad news for Vettel as Button used the benefit of his fresh tyres to pass as the Red Bull was accelerating out of the pit lane, defending carefully at the Spitzkehre. Alonso had come in at the same time and now Button’s sights were fixed on the Ferrari.

With 26 laps to go, and aware of Ferrari’s late-race tyre trouble in the last three Grands Prix, Button looked to be in a strong position. Sure enough he closed to within six-tenths of a second of Alonso and looked set to launch an attack.

But as the race wore on the McLaren gradually began to drop back. As the laps ticked down Button’s concern shifted from the Ferrari in front to the Red Bull coming back at him.

Alonso had pushed the limits of the track in places as he pressed on in the lead but there was no threat to his position in the final laps.

Raikkonen was fourth having passed Hulkenberg when the Force India driver was taken by Schumacher, before hunting down and passing the Mercedes.

Schumacher had been running fifth until making a third pit stop on lap 53. That dropped him behind the Saubers but he was unable to take them back before the end of the race.

Webber struggled to make progress from eighth on the grid and finished where he started. The Red Bull’s shortage of straight-line speed was obvious when battling for position.

Hulkenberg and Rosberg scored points in their home race having three-stopped, the Mercedes driver chasing the Force India across the line.

Massa out of the points

Di Resta was 11th ahead of Massa and the two Toro Rossos, who repeated their finishing positions from Silverstone.

Vitaly Petrov was 16th for Caterham ahead of the delayed Bruno Senna and Romain Grosjean – both pitted after the first lap, Grosjean having clipped the slowing Massa. The Lotus driver later had a big moment in the gravel at turn 12.

The only driver who failed to finish was Hamilton. He’d voiced a desire to retire earlier in the race before his team encouraged him to try to make it through on just two pit stops. His jousting with the front runners put paid the that, and a third pit stop destroyed all chances of salvaging a result.

As the season passes its halfway point Alonso’s lead is up to 34 points over Webber. Vettel told his team he’d “driven like a lion” to capture second and remains third in the championship, 36 adrift of Alonso.