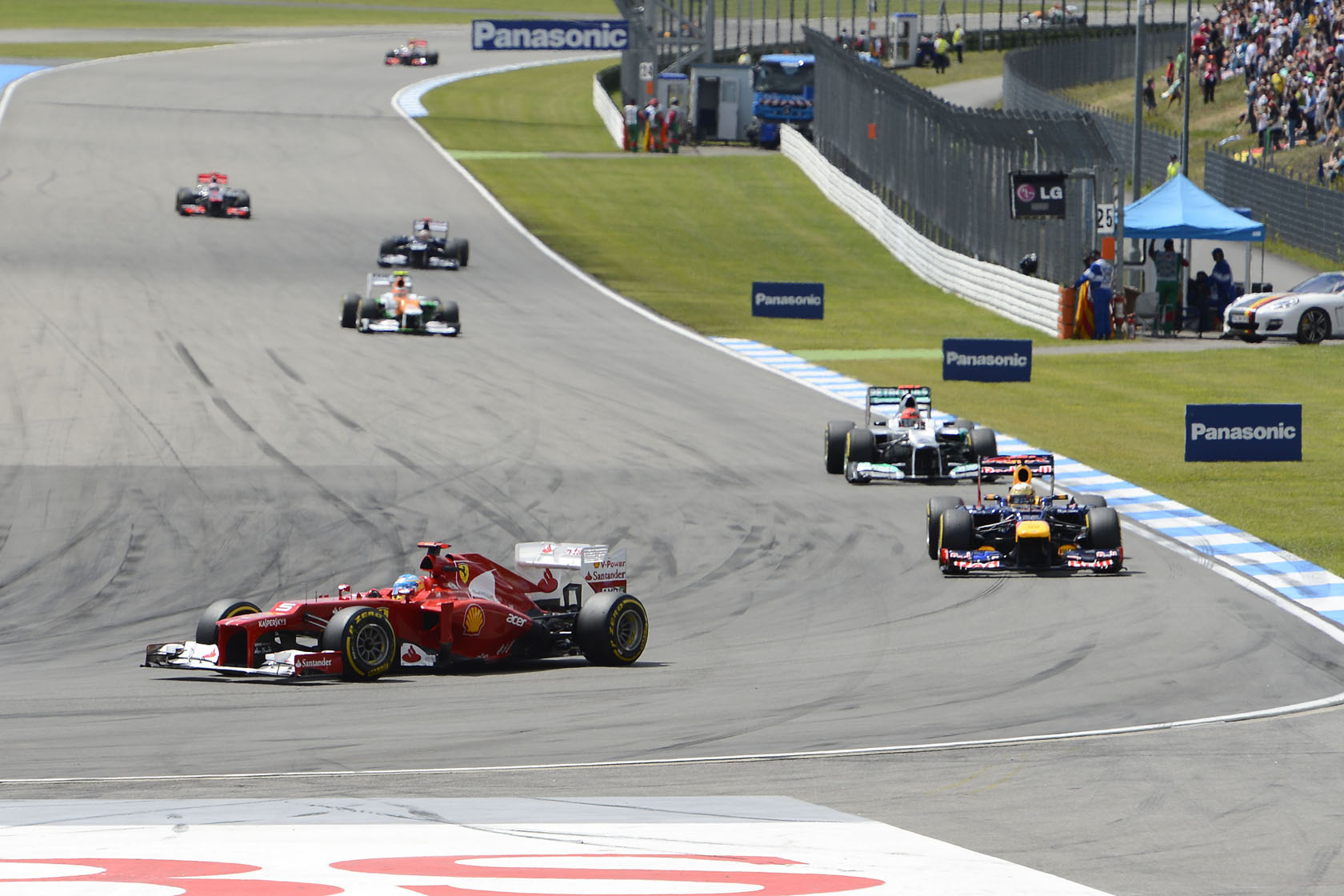 Fernando Alonso held off the challenges of Jenson Button and Sebastian Vettel to claim his third victory of the season in the German Grand Prix at the Hockenheimring..

F1 Fanatic readers rated the race 7.055, almost the same as the previous race at Silverstone.

The race saw a controversial pass by Sebastian Vettel end in a penalty, Lewis Hamilton unlapping himself from the Red Bull driver earlier in the race, and a fair bit of DRS-assisted overtaking at the Spitzkehre hairpin. Here’s what F1 Fanatic readers had to say about the race.

Plenty of intrigue and controversy ?ů‘ťľ‘«£ this was a race which was exciting hours before it started with the Red Bull fuel mapping issue, and hours after it with the impending decision about Vettel?ů‘ťľ‘šůs penalty. Plus the controversy over Hamilton unlapping himself.
Chris Goldsmith

Estesark employed a mathematical approach to rating the race:

This was two thirds of a great race. In the first stint, Michael Schumacher and Kimi Raikkonen put on a good show. In the second stint, it was great to see Button pushing towards the front and eventually taking second place.

But in the third stint, not much really happened. A three-way battle for the lead looked to be on the cards, but it never materialised. Two thirds of the available points, rounded to the nearest point, is seven.
Estesark

An interesting debate sprung up after Fernando Alonso’s team radio was broadcast despite being in Italian:

When a team is talking to their driver during the race they can speak in any language they want. English broadcasters should have an Italian speaker to translate everything Ferrari say on radio.

They should respect you more, since you paying them for a full cover of every Grand Prix.
Stagger

While they’re at it they should hire a dozen translators for all the languages drivers and engineers are speaking.
Anatoly Nechaev

The thorny issue of DRS raised its head again. Was overtaking too easy at the Hockenheimring? Here’s what two people had to say:

As for the DRS zone, well it wasn?ů‘ťľ‘šůt as easy as many expected and there was still that element of out-braking into the hairpin involved.
Younger Hamii

Passing became ridiculously easy and boring to watch. The FIA need to take a very strong look at how DRS should assist overtaking and not be causing it.
MahavirShah

Finally, Bananarama noted that the average F1 race has improved in recent years:

It is interesting that a seven has become standard rating. It was only five years ago that even people interested in F1 fell asleep during races.

What did you think of the German Grand Prix? Have your say in the comments.

The Rate the Race poll for the Hungarian Grand Prix is still open so be sure to add your rating here: