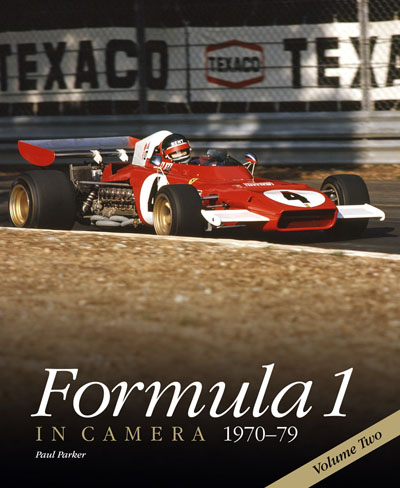 Haynes Formula 1 In Camera series, reviewed here back in March, has spawned a fifth book. This is a second volume of images covering the 1970-79 seasons.

The appetite for Formula 1 nostalgia is clearly healthy. And it’s not hard to understand why the seventies, with its outlandish car designs and spectacular circuits, holds a particular appeal when compared to the increasingly homogenised modern Formula 1 product.

Unlike the previous volume, this one does not include any of Rainer Schlegelmilch’s distinctive and dramatic photography. But it is not too much the poorer for it, and the diversity of pictures on offer is commendable, particularly if your interest extends beyond the front-runners.

Among the highlights include a picture of Arturo Merzario, Harald Ertl and Brett Lunger being given awards at the 1976 Austraian Grand Prix for helping to rescue Niki Lauda from his inferno at the Nordschleife two weeks earlier.

Inevitably the second book on the same subject suffers from a degree of repetition but author Paul Parker has done his level best to avoid that. The pictures are extensively captioned and rich in detail and interesting anecdotes. The potted biographies of some of the more obscure drivers to have appeared in F1 are particularly illuminating.

But – with my anorak firmly buttoned up – I must take issue with the title of the 1979 chapter. “The last Ferrari championship for 21 years” it declares, overlooking their triumphs in 1982, 1983 and 1999. The constructors’ championship may be considered the lesser cousin of the drivers’ but that’s no reason to ignore it completely.

That aside, I have no difficulty recommending this second volume. Though if you find yourself having to choose between the two, I’d go for the first, with its slightly more dynamic images.