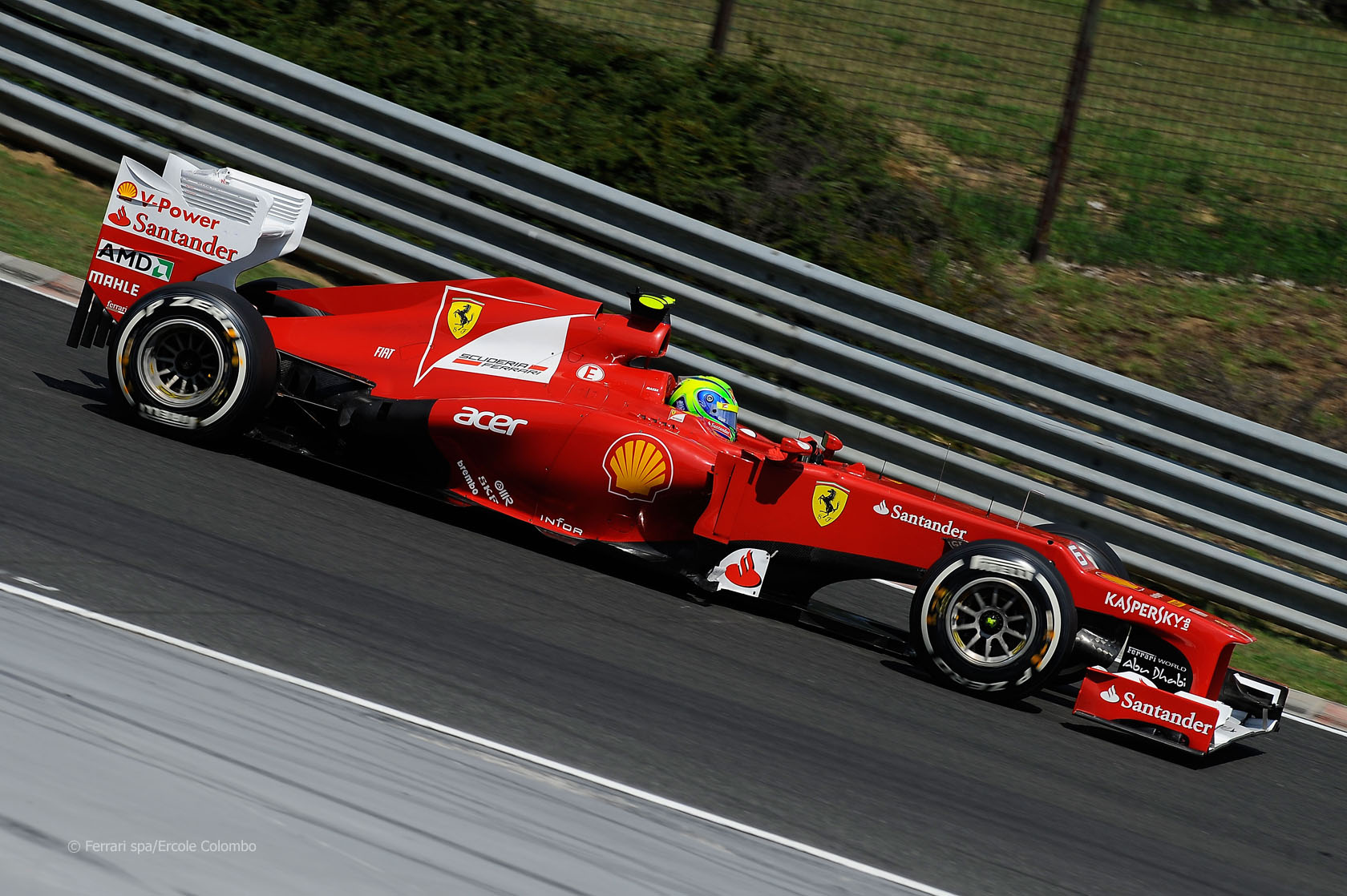 In the round-up: Felipe Massa says he’ll do what he can to help Fernando Alonso win the championship.

My Ferrari future depends on results in second half of season, admits Massa (Daily Mail)

“Organisers of the Belgian Grand Prix have confirmed a new three-year race contract with Bernie Ecclestone and Formula One Management (FOM).”

Caterham technical director Mark Smith: “We are making the 2013 car very much a development of the current car. So there’s not a fundamental shift in what we’re doing and therefore we are going to develop this car a little bit further in to this season than we would have done.”

Martin Whitmarsh: “This season has been difficult for everyone ?óÔéĽÔÇŁ and you would have to say Fernando and Ferrari have done a great job: one in terms of development and two in terms of getting the best out of the package. We haven’t got the best out of our package.”

F1 2012 interview: Codemasters on reaching out to a new audience (Digital Spy)

“Most people who haven’t played F1 instantly think its going to be too time consuming or too difficult for them. So a lot of the campaign this year is about showcasing that F1 is a game for everyone, it’s a sport game just like FIFA is a simulation of football.”

“I don’t know whether we’re going to see a surprise like a [Pastor] Maldonado say win a race through to the end of the year. I think now you’re starting to see that natural progression of top teams starting to pull away. But I could be wrong.”

“[Colin] Chapman used to infuriate Cosworth?óÔéĽÔäós Keith Duckworth with design sketches that included a skew-whiff box that had the word ?óÔéĽ?Łengine?óÔéĽÔäó jotted within; and it was Duckworth, no fan of turbos, who 30 years ago proposed the introduction of a fuel-flow formula, an idea that will come to fruition in 2014.”

“With most of the important staff having deserted by the time the Formula One circus arrived at Spa for the Belgian Grand Prix the story of Andrea Moda Formula reached its climax when Sassetti was arrested in the paddock for allegedly forging invoices. The following week at Monza, the FIA decided that enough was enough and threw the team out of Formula One before it could damage the reputation of the sport further.”

“The display was designed to mark the team’s 35-year history and won gold at the Chelsea Flower Show in May.”

Vijay Mallya, ‘King of good times’ vows to offer another gold-plated door to a temple (The Times of India)

“The door, about six ft in height with an equal width, has a 2.4 kilogram gold cladding which cost Rs 80 lakh (?é?ú91,000), including the fine work. Later speaking to the media, Mallya said,’I have been a devotee of the deities of this coastal district. I have been visiting Kollur Mookambika temple, Tirumala Venkatarama Temple at Bantwal (the home town of his grand father Bantwal Ganapathi Mallya) and Kukke Subrahmanya. In business, it is but natural to have ups and downs. I will be successful again with God’s grace.'”

My new article for Unibet on the history of the Belgian Grand Prix.

Welcome aboard to two new members of the family, USI Italia and Linde Material Handling: http://t.co/Dm9nWdex

Yesterday I was focused on the race and didn't say anything about the interview I spoke about Senna. That's NOT what I really said!

Would F1 still be F1 if it wasn’t an open-wheel, open-cockpit formula? @Drmouse says yes:

The central idea of F1 is that it is, and should remain, the pinacle of motorsport. This core value is only enhanced by enclosed cockpits and wheels.

Having them open is vastly inefficient. Huge amounts of effort go into mitigating this at the moment: See all the aero devices designed to stop the wheels interfering with the aerodynamics of the car. I would say that enclosing the wheels would stop the manufacturers concentrating their efforts on such an irrelevant part of the car.

These efforts could then be put back into the more relevant areas: Overall aero, engine/powertrain, suspension, etc. I cannot see how it would detract from the racing, or the core F1 values, at all.
@Drmouse

The race was started behind the safety car but Schumacher elected to start the race on intermediate tyres (which is forbidden under the today’s rules) and quickly passed the wet-shod runners in front of him.

Giancarlo Fisichella came in second for Jordan but Mika Hakkinen was disqualified from third place due to a fuel irregularity, promoting Heinz-Harald Frentzen in his place.

55 comments on “Massa pledges support to Alonso in title bid”