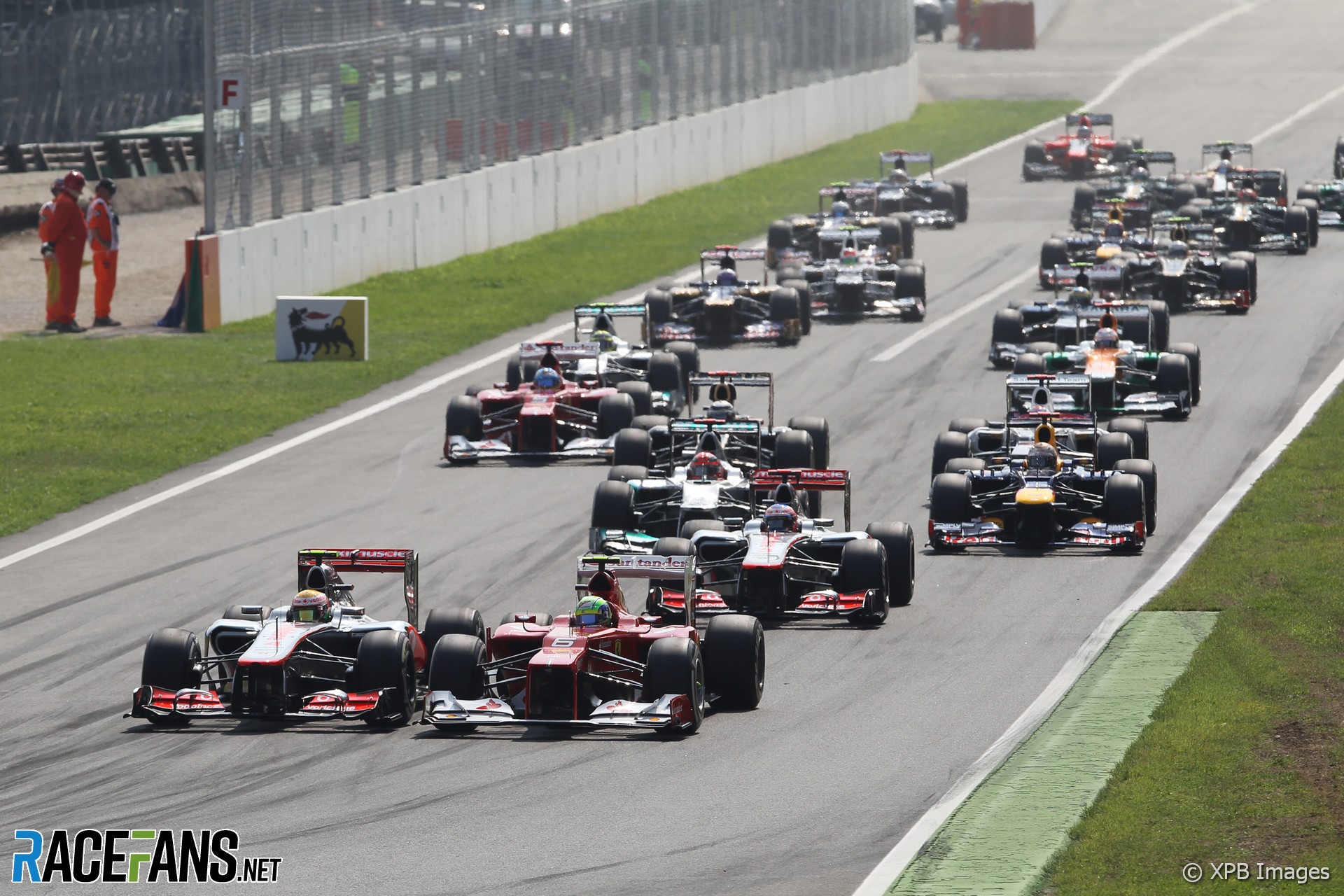 Lewis Hamilton scored a dominant win in the Italian Grand Prix for McLaren.

But he finished less than five seconds ahead of Sergio Perez, who battled through the field from 12th on the grid, passing both the Ferraris on the way.

Massa made a strong getaway from third on the grid at the start, quickly passing Jenson Button. He drew alongside Hamilton as they braked for the first corner, but had to settle for passing just one of the McLarens.

Michael Schumacher held fourth behind him, under pressure from Sebastian Vettel, while team mate Nico Rosberg fell back.

Alonso appeared behind Vettel after a scintillating first lap. He picked up two places at the start, then slipstreamed past Kamui Kobayashi. He crossed the start/finish line in Kimi Raikkonen’s tow and easily dived up the inside of the Lotus for sixth.

Vettel put Schumacher between himself and the Ferrari but it didn’t take long for Alonso to find a way past and appear behind Vettel. A few laps later Schumacher headed for the pits, the Mercedes driver having to make two pit stops on a day when most got away with just one.

Massa was gradually dropping back from Hamilton, the gap between the two opening up to 4.7 seconds by lap 15. But as the teams paid close attention to the state of their tyres, Ferrari ran into difficulty as they lost the telemetry feed from Massa’s car.

On the 19th tour Button drew alongside the Ferrari on the outside as they headed into the Roggia, and claimed back the second place he’d lost on the first lap. Massa radioed his pits and told them he was coming in, and on the next lap Alonso did likewise, following Vettel down pit lane.

Ferrari’s stop was almost quick enough to get Alonso out in front of the Red Bull but it wasn’t to be: he emerged on the tail of the RB8. Along with Massa, the trio had dropped back into the midfield pack.

First was Daniel Ricciardo, who Vettel made slight contact with as they exited the Roggia. Alonso followed Vettel through at Lesmo 1.

Next was Bruno Senna, and this time Vettel briefly got the Williams between him and Alonso. But not for long – Alonso opened DRS, passed Senna on the run to Ascari, and latched back onto the rear of Vettel.

What followed next was a near-repeat of the 2011 incident at Curva Grande, but with roles reversed: Alonso was the one trying to pass Vettel, and Vettel edged him onto the grass.

The other significant difference was that this time a penalty was handed down – to Vettel. Alonso passed him later anyway, and Vettel came in shortly afterwards to serve his drive-through.

While Alonso was passing Vettel, Hamilton was taking his lead back – from Perez. The Sauber driver had started on the hard tyres and ran a long first stint. He picked up places the hard way to begin with, taking Rosberg, Senna, Paul di Resta, team mate Kobayashi, and Raikkonen.

Hit belated first pit stop dropped him to eighth and he gained his first place when Button hit trouble on lap 34. A fuel pick-up problem ended his race as the approached the Parabolica.

Perez’s progress was delayed by Raikkonen at first, the Lotus driver re-passing him at Lesmo 1 after the Sauber had gone around the outside of him for the second time at the Roggia. Perez got the job done for good on the next lap despite approaching the Rettifilio on the outside of Raikkonen.

Vettel’s drive-through and Schumacher’s second pit stop brought the Sauber up to fourth, with plenty of laps left for his superior pace on the medium tyres to make trouble for the cars ahead.

With Alonso now third behind Massa a change of positions between the Ferraris was an inevitability. Team orders being legal now, Ferrari could have simply instructed Massa to move aside.

If one was given, it was not broadcast on the team radio channel. Rob Smedley told Massa “think about how you’re going to manage the tyres” – not that Smedley was able to monitor Massa’s tyres via the lost telemetry.

Shortly afterwards Smedley advised Massa that Alonso was within DRS range, and the inevitable swap duly took place on the start/finish straight. After that it wasn’t long before Massa was given a hurry-up message as Perez appeared just over four seconds behind him.

But that was in vain. The Sauber was taking over a second per lap off the Ferraris and Perez was soon on Massa’s tail. He didn’t even need DRS to get the past, though he came perilously close to clipping the Ferrari as he blasted past on the way to the Parabolica.

His next target was Alonso, who could ill-afford any problems in a battle with a Sauber on a day when his closest championship rival was mired in the midfield. Perez claimed second place on the outside of Alonso going into Ascari.

Hamilton said afterwards he was pleased to hear Perez had demoted Alonso, but the team were sufficiently concerned about the threat from the Sauber to ask Hamilton to up his pace. He duly did so and had enough in hand to keep Perez at bay.

Alonso completed the podium ahead of Massa, who is still looking for his first top-three finish since 2010. Raikkonen held off Schumacher for fifth despite the Mercedes having fresher tyres, and Rosberg came in seventh.

The Mercedes pair gained two places late in the race at the expense of Red Bull, who had a disastrous final few laps. First Vettel, having passed Webber, pulled over with a repeat of the alternator problem he’d suffered in the final practice session – itself a recurrence of the problem that ended his race in Valencia.

Then Webber spun at the exit of Ascari, flat-spotting both his tyres, leading him to call it a day.

Senna took the final point which was some consolation for a bruising race. Rosberg edged him off at the Rettifilio early on and the Williams also took to the run-off while battling Di Resta. Senna returned to the track very close to Webber, who dodged around him.

Jerome D’Ambrosio ended his stand-in duty for Lotus in 13th, the last driver on the lead lap.

The Caterham pair crossed the finishing line separated by a tenth of a second, Heikki Kovalainen ahead of Vitaly Petrov, the pair just ten seconds ahead of Charles Pic’s Marussia.

Timo Glock and the HRT drivers were the last of the drivers running at the end. The two Red Bulls were classified despite stopping, as was Nico Hulkenberg.

Joining Button in retirement was Jean-Eric Vergne, who lost control of his car at the Rettifilio early on and flew through the air after hitting the kerb at the inside of the track. He complained of back pain but climbed out of the car and later said on Twitter he will definitely be fit for Singapore.

Hamilton’s win means he is now Alonso’s closest championship rival, with Raikkonen just one point behind. Alonso’s successful damage-limitation job leaves him ahead in the championship to the tune of more than a win.

With Perez joining them on the podium, the Italian Grand Prix belonged to the three drivers whose races where ended by the first-lap carnage at Spa one week ago.

111 comments on “Hamilton wins as Perez charges to second”