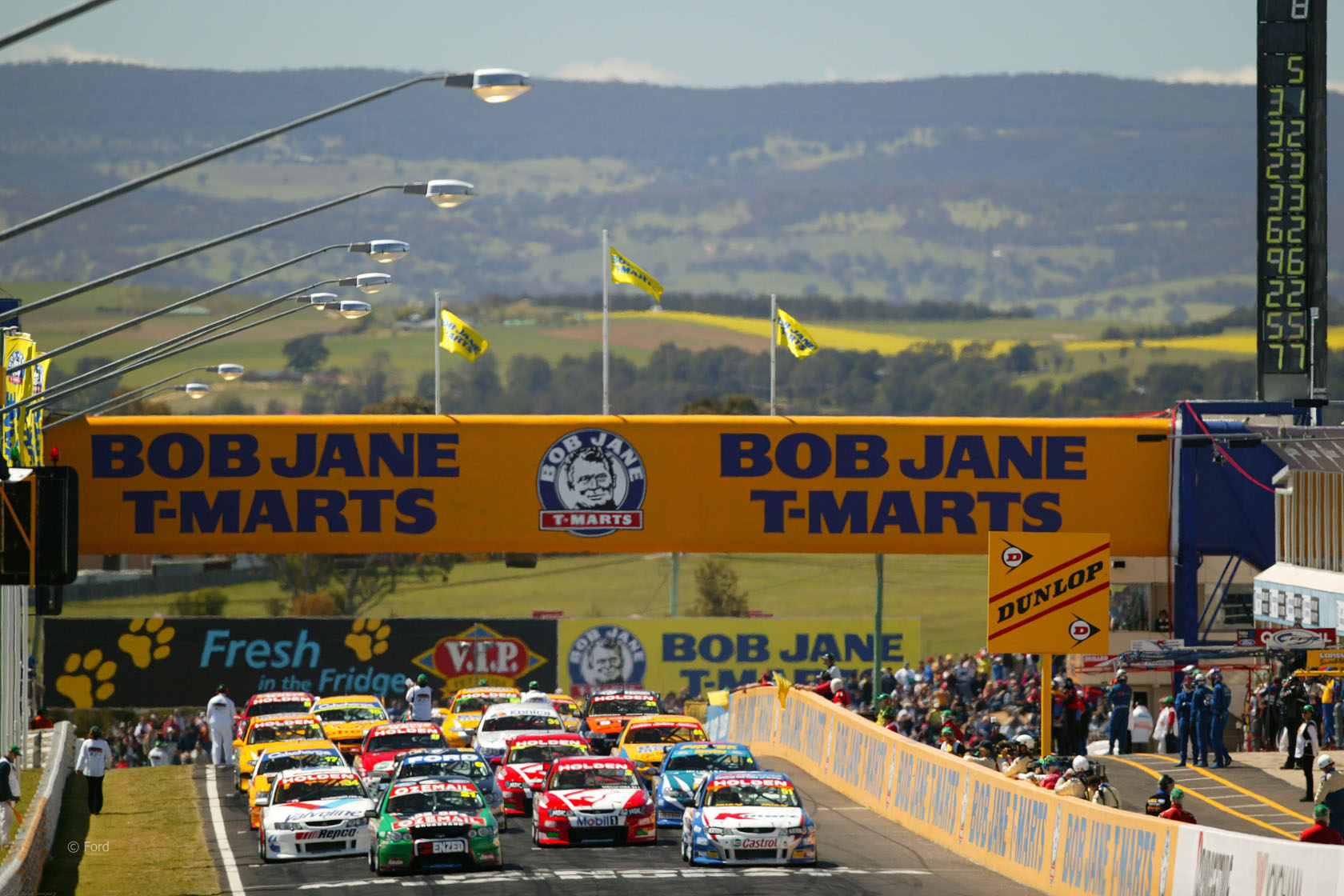 The Bathurst 1000, Australia’s Great Race, is on this weekend. Australian Formula Vee racer Stephen Jones (@aus_steve) urges you to check it out.

It?óÔéĽÔäós a time of transition in the Australian V8 Supercar championship, with a control car, new races and two new manufacturers on the cards for 2013.

But with Bathurst this weekend and the popular Gold Coast event featuring several ex-F1 drivers event following it, now’s the perfect time to start following Australia?óÔéĽÔäós favourite form of motorsport – besides Formula One of course!

The V8 Supercar Championship is one of the top touring car categories in the world and is known for producing some of the closest, most exciting racing.

V8 Supercars in its current form began in 1995, when European 2.0 litre race cars were barred from competing in the Australian Touring Car Championship (the championship name at the time). From that point forward, the championship consisted of 5.0-litre Ford and Holden race cars exclusively.

Over the past decade the championship has risen in popularity to become one of Australia?óÔéĽÔäós most watched sports. The series is broadcast live around Australia on free-to-air television, and is also shown by international broadcasters.

The Bathurst 1000 is the championship’s marque event. Like the Indianapolis 500 in IndyCar or the Le Mans 24 Hours in endurance racing, winning this race is considered as important and brings as much recognition as winning the championship.

The race is held on the Mount Panorama course, which is undoubtedly one of the world’s great racing tracks (see satellite image below). The roads were originally built as a scenic route for tourists. The track now uses these public roads, including an adrenaline-fuelled run across the top of the mountain, as part of a daunting 6.2km track.

The 1000km endurance event is by far the longest race on the calendar. It’s contested by pairs of drivers who share cars during the race. Garth Tander and Nick Percat won last year’s running, completing a hat-trick of victories for Holden in The Great Race, which is marking its 50th anniversary this year.

V8 Supercars have traditionally been the ultimate in “race on Sunday, sell on Monday” cars. A move away from production stock cars has changed that motto somewhat.

The series is traditionally a blue vs red struggle between Ford and Holden (General Motors). Their current Falcon and Commodore models (respectively) are vastly different from the production cars that raced in the late 80s and early 90s.

Dunlop supplies a control tyre for all teams to use. They have also provided a softer “sprint” tyre for certain race meetings, much like the current two-compound rule in F1.

A new car is on the way – the imaginatively-dubbed “Car of the Future” will be unleashed on the championship next year.

This new control chassis has attracted interest from other car manufacturers. Nissan will enter two cars in the 2013 series using the Kelly Racing Team factory, while Mercedes AMG is being entered in the series courtesy of Stone Brothers Racing, who are collaborating with local GT Race team Erebus Racing.

The championship will also head to the Circuit of the Americas in 2013, for the first North American race in V8 Supercars history.

The 2012 field has a good mix of old and new blood throughout the field.

Locked in a four-way battle for the championship with them are Mark Winterbottom and Will Davison, lead the charge for Ford Performance Racing (FPR).

Lewis Hamilton’s GP2 team mate Alexandre Premat is in his first season of V8 Supercars and is the lowest-scoring driver to have started every round.

Jacques Villeneuve was called in as a guest driver at Townsville this year, but with no opportunity to test the car before the round could do no better than a lapped 24th in the second race. He returned at Queensville where he repeated the same result in both races.

Australian circuits dominate the calendar, with a solid mix of permanent and street tracks.

The marque events of the V8 Supercar championship are fittingly raced on some of the finest tarmac found in this part of the world. A shortened version of the Adelaide Grand Prix track plays host to the Clipsal 500 in early March.

Sandown hosts the Dick Smith 500 (a warm-up event to Bathurst) in September. And a modified version of the old IndyCar track on the streets of Surfers Paradise hosts an interesting 600km format event dubbed the Gold Coast 600 in October.

The V8 Supercar Championship is perpetually in a state of international growth. While several earlier international races have come and gone, some have come close to success. This year V8 Supercars will be the top support race to Formula 1 at the Abu Dhabi Grand Prix. The teams will use the support category pits on the second back straight at Yas Marina for the Yas 400.

The 2012 season has been dominated by Ford Performance Racing and Triple Eight. There are five rounds to go in the championship.

The Bathurst race is followed by the Gold Coast 600, where high-profile international racers team up with the regular pilots. This year Nick Heidfeld, Sebastien Bourdais, Vitantonio Liuzzi, Mika Salo, Lucas di Grassi, James Hinchcliffe, Ryan Briscoe and Marco Andretti will be among those taking their shot at manhandling 650bhp V8 Supercars around the narrow streets of the Surfers’ Paradise.

The Bathurst 1000 begins and Fabian Coulthard suffers an enormous crash at the end of the Conrod Straight on lap one.

The introduction to last year?óÔéĽÔäós Bathurst 1000.

Van Gisbergen shows how to celebrate a race win

The track outline can be seen in this satellite image. The circuit runs anti-clockwise beginning from the short straight at the north end of the track, before turning into a 90-degree left-hander. A longer straight takes them into the mountain section.

On their return to the pits the highest speeds are attained on the Conrod Straight. It leads into the Chase, a sequence of three corners that were installed on safety grounds 25 years ago.

Are you following the Australian V8 Supercar championship? Join the group here:

Why you should watch…