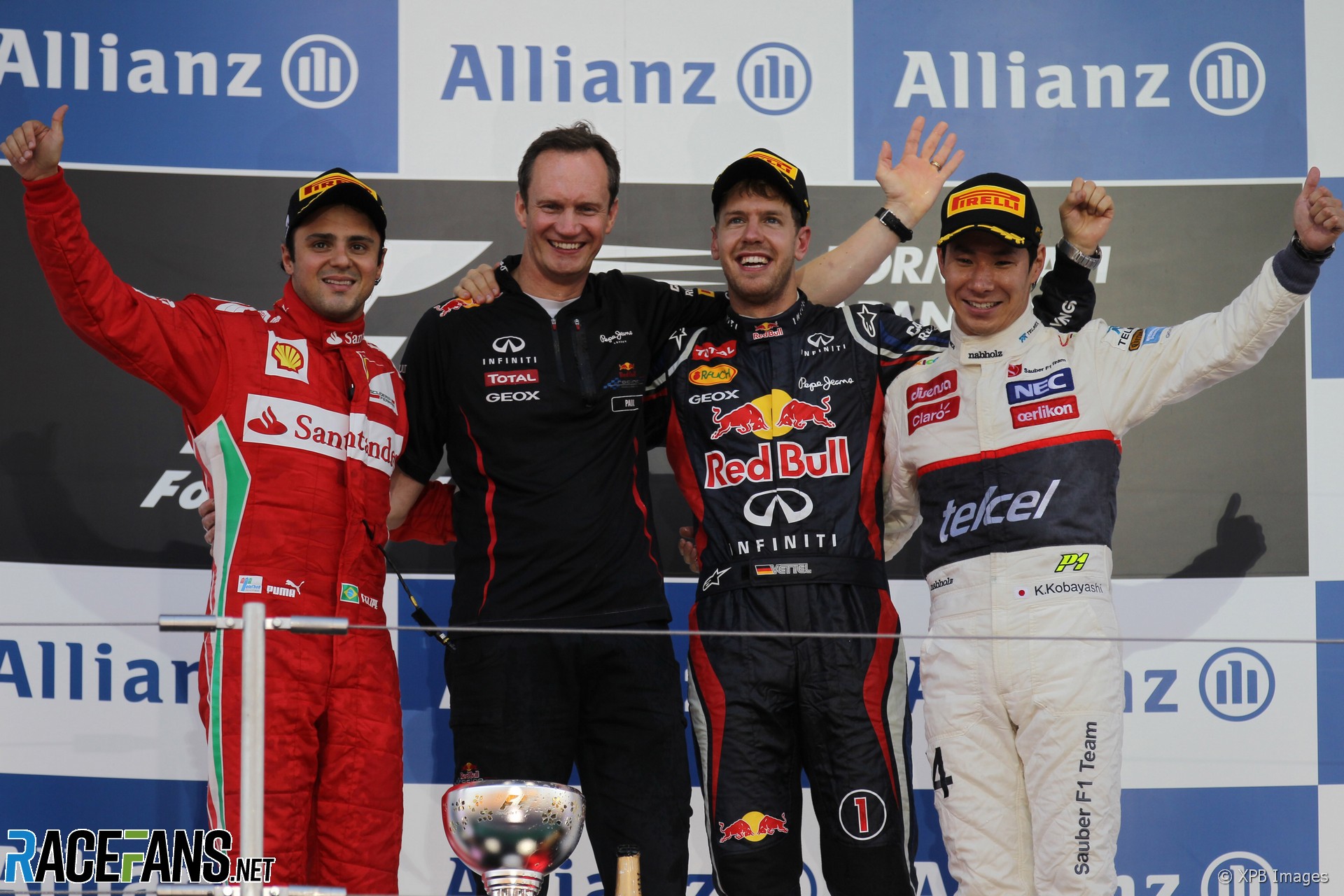 He inflicted a major blow on Fernando Alonso’s championship hopes as the Ferrari driver was eliminated in a crash at the first corner.

While Vettel romped to victory Kamui Kobayashi brought cheer to the crowd by taking his first podium finish on home ground.

Vettel got away cleanly at the start but chaos broke out behind him.

As they charged to the first corner Alonso had Raikkonen to his left and Button on his right. The Ferrari and Lotus pinched together and the consequences were disastrous for Alonso: he was pitched into a spin and came to a stop, his race over.

There was more drama at the next corner involving the other Lotus. Romain Grosjean failed to slow enough for turn two and rammed Mark Webber’s second-placed Red Bull. Both were able to continue.

The chaos didn’t end there – Nico Rosberg’s race also came to an end at the first corner after a tangle with Bruno Senna. Some 20 laps later Senna was handed a drive-through penalty.

The stewards were much quicker to pass judgement on Grosjean, whose previous indiscretions earned him a ban for the Italian Grand Prix. His latest blunder swiftly earned him a ten-second stop-go penalty.

The safety car was only required for one lap before the race resumed again. Kobayashi had moved up to second and Vettel instantly pulled out a 1.3 second lead over the Sauber driver as the race restarted.

Button emerged from the first corner mess in third place followed by Felipe Massa. Raikkonen, fifth, had minor front wing damage, but easily resisted Sergio Perez’s attempt to take him around the outside of turn one.

The Sauber driver took to the run-off and returned to the track behind Lewis Hamilton – the very driver whose place he will take next year. Hamilton, struggling with his car as he had in qualifying, began to drop back and fell victim to an audacious lunge from Perez at the hairpin on lap five.

Timo Glock had been 11th when the safety car came in, but was easily passed by those behind him. Heikki Kovalainen’s Caterham was first past, followed by Jean-Eric Vergne, Paul di Resta and Michael Schumacher – the latter having started from the back row.

Vettel was in his element, rapidly pulling away from Kobayashi. The Sauber driver was hardly holding up Button, who had dropped two seconds behind. The other C31 also had good pace at this stage, Perez closing in on Raikkonen who was starting to struggle with his tyres.

Button, Raikkonen and Hulkenberg pitted together on lap 13. But the Lotus driver emerged behind Kovalainen and Vergne, and lost a lot of time picking his way past the Caterham and Toro Rosso.

Despite that when Perez pitted on lap 16 he was unable to get out in front of Raikkonen. And when Hamilton came in on the next lap the McLaren jumped back in front of the Sauber.

Perez set about trying to pass the McLaren again but this time it all went wrong. He lost control of his car at the hairpin, spun into the gravel and his race ended there.

As well as lapping quicker than those behind him, Vettel was also looking after his tyres better. He didn’t make his first pit stop until 18, by which time all his major rivals had pitted, and he continued without losing the lead.

Button had a problematic first pit stop with an overheating right-rear wheel hub. Shortly afterwards he reported his gearbox had stopped shifting properly – an ominous warning given Hamilton’s retirement in Singapore and Button’s penalty for a pre-race gearbox change.

Meanwhile Massa jumped ahead of both Button and Kobayashi at the first round of pit stops, taking second place.

Towards the end of his second stint Raikkonen began to be caught by Hamilton. The Lotus made for the pits on lap 31 and Hamilton did the same on the next tour. McLaren produced a superbly quick stop and Hamilton returned to the track just as Raikkonen was approaching turn one.

The Lotus was ahead as they entered the corner side-by-side but the tenacious Hamilton clung to the inside and obliged Raikkonen to back down in turn two. That put him up to fifth.

Kobayashi keeps Button back for podium

The running order remained largely the same over the course of the final stint. Massa fell over 20 seconds behind Vettel, who indulged himself by unleashing the full potential of his car on the penultimate lap, setting the fastest tour of the race.

Second place for Massa ended his two-year podium drought and may strengthen his chances of retaining his Ferrari seat. Kobayashi slipped back from him in the final stages as Button closed on the Sauber, though the McLaren never got close enough to try a move.

Hamilton took fifth ahead of Raikkonen and Hulkenberg, the latter claiming a solid points finish from 15th on the grid. Pastor Maldonado took eight, scoring his first points since winning the Spanish Grand Prix in May.

An unhappy Webber made it to the end of the race with two pit stops having made the first immediately after his tangle with Grosjean. He salvaged two points for ninth place.

The final point went to Daniel Ricciardo, who defended carefully from Schumacher in the closing stages. The Mercedes driver just fell short of taking a point having started 23rd.

And on the weekend Schumacher announced his second retirement from Formula One, Vettel moved closer to becoming his successor as F1’s next three-times world champion.