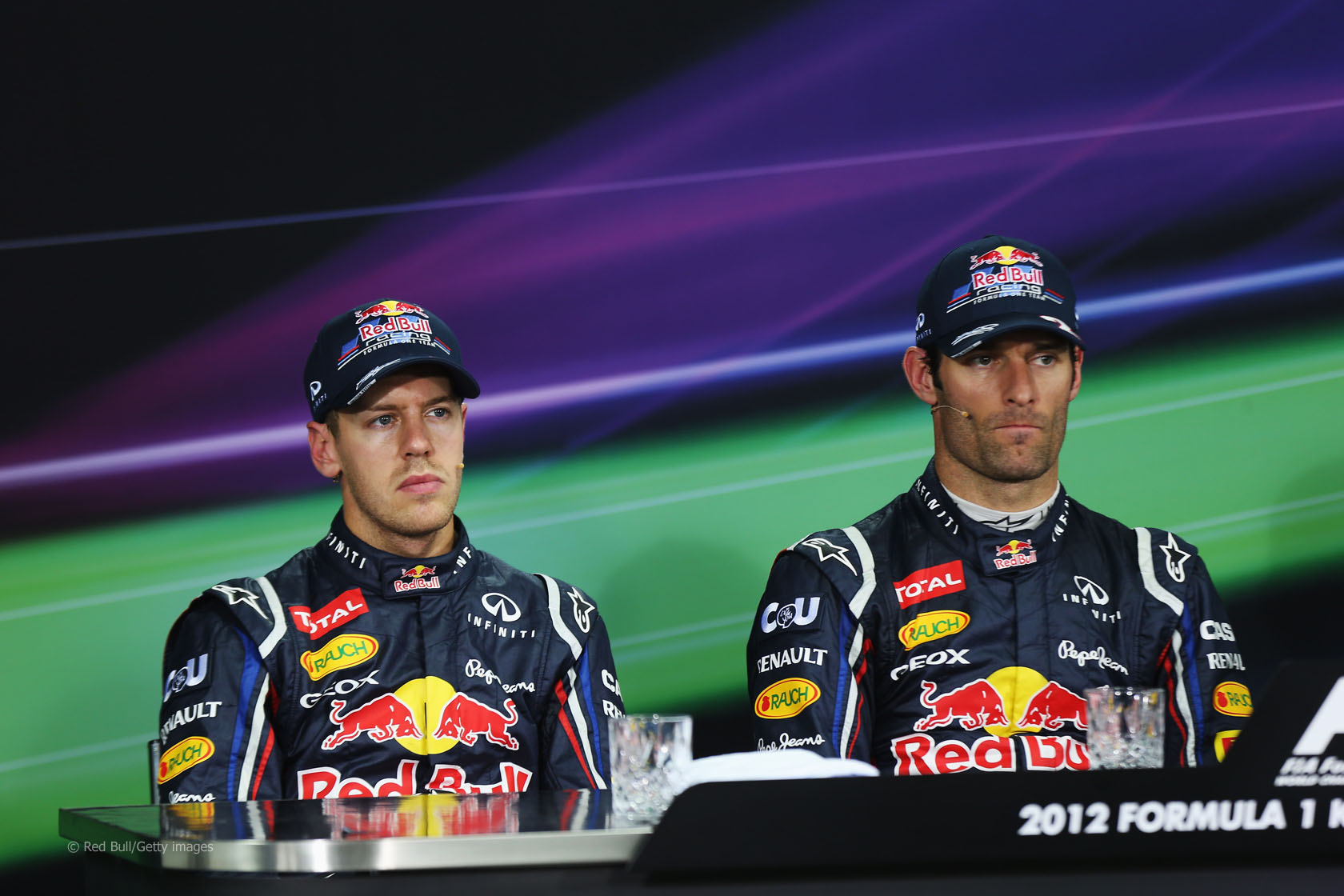 And he’s already given short shrift to suggestions he might drive to help his team mate improve his position in the championship.

“I need to win, so that?óÔéĽÔäós my goal,” said Webber when asked the inevitable question about team orders during Thursday’s press conference. “I’ve come here to push.”

Last year saw the first dry-weather start in Korea and it was a dramatic affair with much swapping of positions which set the shape of the race. Who will come out on top this time?

The Korea International Circuit offers little grip at all – whether a driver starts on the racing line or off it. So starting off-line is not necessarily a disaster for the likes of Vettel and Fernando Alonso, particularly as the run to the first corner is so short.

“Last year we made a good launch and I think here that you never know what happens. You might as well start third, fourth, fifth and you could end up first by turn four, so you don’t know. There’s a long straight after the second corner.”

The 1.05km straight leading to turn three is followed by another long stretch before turn four. These offer huge potential for first-lap jousting where judicious use of KERS (for those that have it) is vital.

Last year none of the top six cars at the end of the first lap were in the same positions they’d occupied at the exit of turn one. So even if pole sitter Webber comes out of turn one in the lead he’ll need to keep an eye on his mirrors.

Some drivers can’t afford to be as aggressive as others, notably the top title contenders. Alonso has had enough first-lap disasters already this year and he acknowledged his potential vulnerability at the start: “Maybe I might lose a few places immediately after the start, as I?óÔéĽÔäóm on the dirty side of the track, but we have shown we have a good pace over a long run and so we should be able to stay with the lead group.”

Romain Grosjean would do well to borrow Alonso’s philosophy. The Lotus driver faced fresh criticism of his driving following his collision with Webber at Suzuka. He needs to keep out of trouble at all costs, even if it means surrendering places at the start. Red Bull may have locked out the front row but Friday’s practice times indicated they might not have things all their own way during the race. In the high fuel laps Ferrari, McLaren and Lotus all improved their times at a faster rate than Red Bull.

The top ten drivers will all start on super-soft tyres. Jenson Button is the first driver with a free choice of tyres, and that could prove particularly valuable here.

Two-stop strategies are expected to be commonplace, but drivers may be able to get away with one. Button could be well-placed to make that strategy work. This is a tactic Sauber have used to great effect as well, and the two C31s are lined up behind Button on the grid.

“With around 0.2 to 0.6 seconds lap time difference between the two compounds, we would expect to see two pit stops during the race, but some teams could even try one stop, as the smooth surface means that wear is low,” explained Pirelli motorsport director Paul Hembery. “So we could see longer stints than expected, with the front tyre being the limiting factor here.”

Alonso chose to put on a set of super-soft tyres in Q1 to ensure safe passage to Q2. But he used them with impressive skill, taking just enough life out of them in Q1 to move up one position in the rankings, ensuring that Lewis Hamilton would have been eliminated instead of him had Bruno Senna improved his lap time.

He then used the same set of tyres in Q2 to set the 1’37.987 which got him into the top ten shoot-out. His economical use of tyres in qualifying may pay dividends in the race, and is further evidence of him wringing the absolute maximum out of a car which is still lacking in outright one-lap pace.

You don’t need to look at the sector times to know Vettel let a chance of starting from pole position slip through his fingers. He was visibly unhappy after catching Massa during Q3, costing him time.

“I don’t want to blame it on Felipe,” he said afterwards. “I don’t like all these discussions; we’ve had a lot of them lately. These things happen, it’s not Felipe’s fault at all. I should have known earlier. If anything it was my mistake.”

Raikkonen is using Lotus’s new Coanda exhaust which should improve his car’s downforce but appears to be having a negative effect on his straight-line speed.

With Narain Karthikeyan not setting a time due to his brake failure, Raikkonen’s car was the slowest in a straight line during qualifying.

Who will prevail in the battle of the Red Bulls? Or will one of their rivals keep them from victory?

Share your views on the Korean Grand Prix in the comments.

43 comments on “Vettel should expect no favours from Webber”