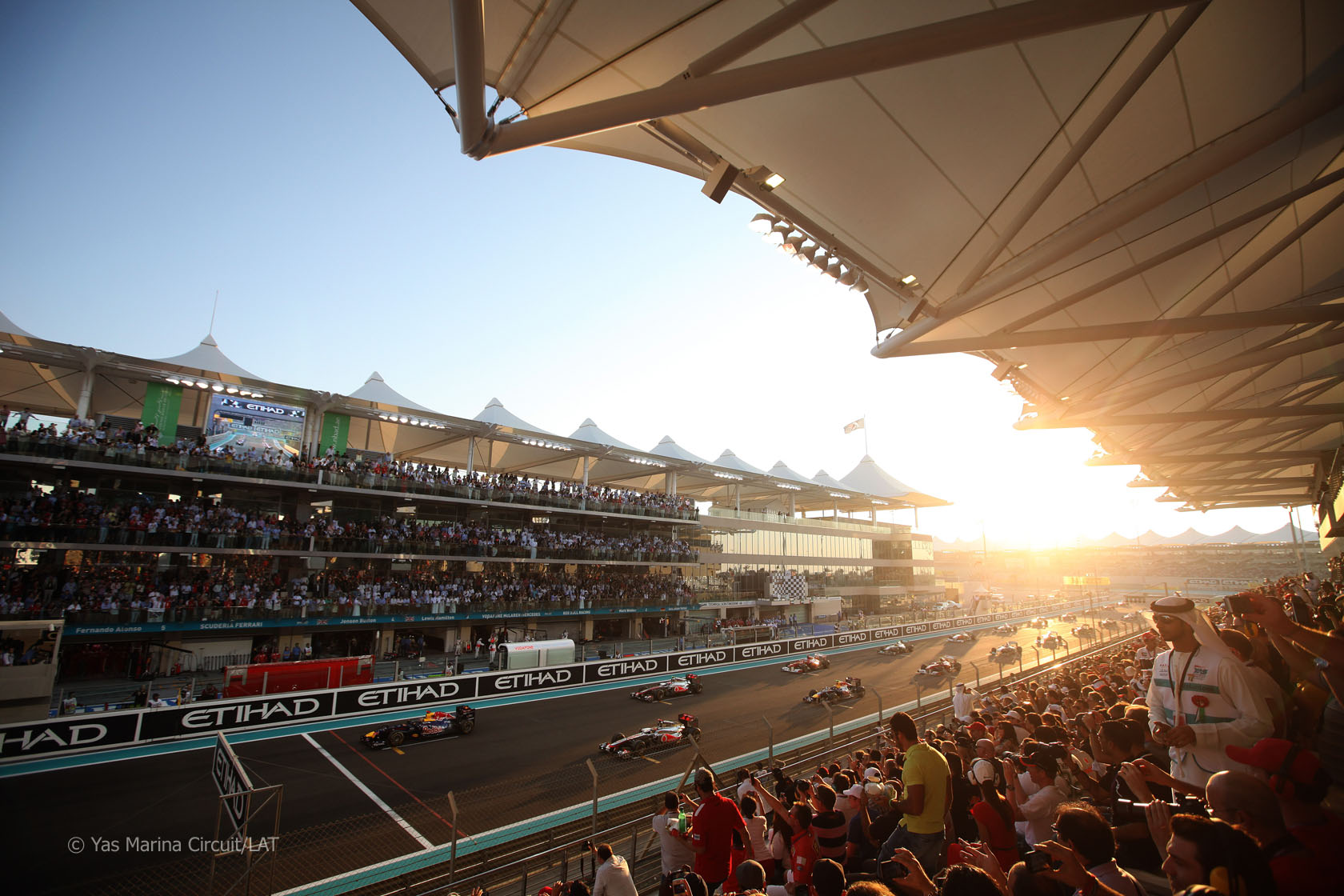 “I?óÔéĽÔäóm sure for the people watching from the hotel it must look pretty hardcore,” says Heikki Kovalainen of the last sector at Abu Dhabi, “but from inside the car it?óÔéĽÔäós not too much of a challenge”.

A lap of Abu Dhabi is defined by two things – the slow final sector of the lap, and two massive straights leading into heavy braking zones. It is every millimetre the model of a modern F1 track, with vast hectares of flat run-off, a drearily long lap and too many chicanes.

Had the 2010 championship situation not made that race a nail-biter there would be nothing memorable about any of the first three Abu Dhabi Grands Prix.

But there is cause for optimism. Valencia had never seen a great F1 race until this year. Soft tyre compounds and a fortuitously-timed safety car period created a race which F1 Fanatic readers judged the best of the year so far. Perhaps we’ll get lucky again this weekend.

Abu Dhabi’s twilight race means the teams face unusual variations in track temperature during the weekend. The first and third practice sessions are held earlier in the day and in hotter temperatures than qualifying and the race.

This is another venue where the ‘evolution’ of the track surface is important. With no GP2 support races this year, the track may not clean up as quickly as before, although F1 is sharing the event with Australian V8 Supercars.

One welcome change to the track for 2012 is the addition of higher kerbs to discourage corner-cutting. These were used at turns eight and nine last year (the chicane between the two longest straights) and have been added at turns five, six, twelve to fourteen, eighteen and nineteen.

Last year Pirelli supplied the medium and super-soft tyres but for this weekend’s Grand Prix the super-soft has been replaced with the soft. Sauber’s head of track engineering Giampaolo Dall?óÔéĽÔäóAra reckons this “might be a little bit on the conservative side”.

As we saw in India, the swing towards less challenging rubber has reduced the variety we saw at the front of the field earlier this year. Red Bull, McLaren and Ferrari lined up one after the other on the grid.

The way it’s going, this season which began with seven different winners in as many races may see just one driver win the final seven rounds.

The teams are being seriously stretched in the final phase of the season. This will be their fourth Grand Prix in five weeks and after one weekend off another back-to-back pair of races will follow. For Red Bull, McLaren, Lotus, Sauber, Toro Rosso and Caterham there is even less respite, as they will remain in Abu Dhabi for next week’s Young Drivers’ Test. Sebastian Vettel is edging ever closer to a third world championship but Fernando Alonso won’t let him have it easily. Vettel has now amassed five wins to Alonso’s three yet is just 13 points ahead of him in the championship.

Leaving Abu Dhabi with a lead of more than 25 points – the value of a win – would be a major psychological boost. But as impressive as Red Bull’s performance is at the moment, nothing can be taken for granted.

Last year’s race provides proof of that. Vettel skidded off with a puncture on the first lap, ending his hopes of victory.

Should Vettel win this weekend, he will become only the seventh driver in F1 history to string together five consecutive wins. It’s a reminder that sustaining this kind of success is extremely difficult. And several of those who did so before arguably had greater car performance advantages than Vettel.

McLaren have still not got their reliability problems sorted, particularly in the gearbox department, which caused trouble for both drivers during the Indian Grand Prix weekend.

But how the MP4-27s perform this weekend could have significant consequences for the championship. Will they act as a buffer between Ferrari and Red Bull, as in India? Or could they put Vettel under pressure for pole position and potentially give Alonso something to work with on race day?

Hamilton is particularly handy around here – he and Vettel are the only drivers to have won or set pole position at the previous three Abu Dhabi Grands Prix.

Yas Marina can’t be Alonso’s favourite circuit, haunted by memories of how he lost the world championship to Vettel two years ago. It would be fitting if his title hopes were reignited here.

India showed that if he can qualify higher up the grid he might have the race pace to trouble Vettel. But Ferrari might have to keep an eye on Lotus, who believe they could have qualified better in India and have an update for the E20 this weekend.

Mercedes are having a truly rotten end to the season with their streak of point-less races now stretching to three. It’s hard to believe this is the same car which was in contention for pole positions and victories earlier this year.

Their downturn in form appears to have coincided with their attempts to add a Coanda exhaust to their car following the Mugello test. Other teams have found this a considerable improvement but it could be the source of Mercedes’ problems

On top of that tyre temperatures seem to be a persistent concern for the team. You only have to spend a few minutes listening to the team radio to hear one of their drivers being advised about the state of their rubber. There will be no respite from that in the heat of Abu Dhabi, so points could be a challenge once again.

If it all works as planned – and Lotus’s upgrades have not always done so this year – they may have a stronger weekend here. But this team also appears to be suffering from Pirelli’s tendency to pick more conservative tyres in the latter part of the season. Tough times for Paul di Resta. His team mate is moving on at the end of the season and McLaren passed him over for Sergio Perez.

He’s hopeful the team will make progress this weekend: “We?óÔéĽÔäóve seen some things in the data so hopefully we can get on top of them and back up to speed right from the start of practice on Friday.”

Sauber have been presented the opportunity they were looking for to take fifth in the constructors’ championship off Mercedes. But they haven’t capitalised on it as well as they should, with Kobayashi’s 15 points for third in Japan their only score during Mercedes three-race stint out of the points.

The team are in the awkward position of ending the season with two drivers who may not be racing for them next year. Sergio Perez is McLaren-bound, Nico Hulkenberg is joining the team and there are rumours Kamui Kobayashi needs to bring a sponsor on board to hold onto his seat.

But this will also be an important race for Jean-Eric Vergne, who has plenty of F1 experience at this track from testing there in 2010 and 2011, and has an opportunity to show what he can do.

Bruno Senna had a good race in India, though once gain his qualifying performance let him down. However it indicated that Williams understand their recent loss of form.

“We have had a balance inconsistency in the car over the last few races and we managed to isolate the cause in India and fix the issue,” explained chief operations director Mark Gillan. Vitaly Petrov has made gains on Heikki Kovalainen since Tim Wright became his race engineer at the Singapore Grand Prix. Petrov has out-qualified his team mate three to one since then.

But the team’s focus is on trying to claw back tenth in the constructors’ championship for the team. Abu Dhabi’s typically low attrition rate is not likely to help their cause.

Giedo van der Garde will drive Petrov’s car in first practice ahead of his longer spell at the wheel in next week’s test.

HRT’s persistent braking problems must have their drivers quite worried. Narain Karthikeyan had high-speed failures in Canada and Korea. Pedro de la Rosa suffered one in India too.

Abu Dhabi is another track where the brakes get a lot of punishment, so HRT have to get to the bottom of this. Team principal Luis Perez-Sala admitted they were ‘running to the limit from the start’ in India.

Ma Qing Hua will get his third run in the car during Friday practice in place of Karthikeyan.

Max Chilton will make his debut in an official F1 session this weekend as he takes over Charles Pic’s car for the first practice session.

Are you going to the Abu Dhabi Grand Prix?

If you’re heading to Yas Marina for this weekend’s race, we want to hear from you.

Who do you think will be the team to beat in the Abu Dhabi Grand Prix? Have your say below.