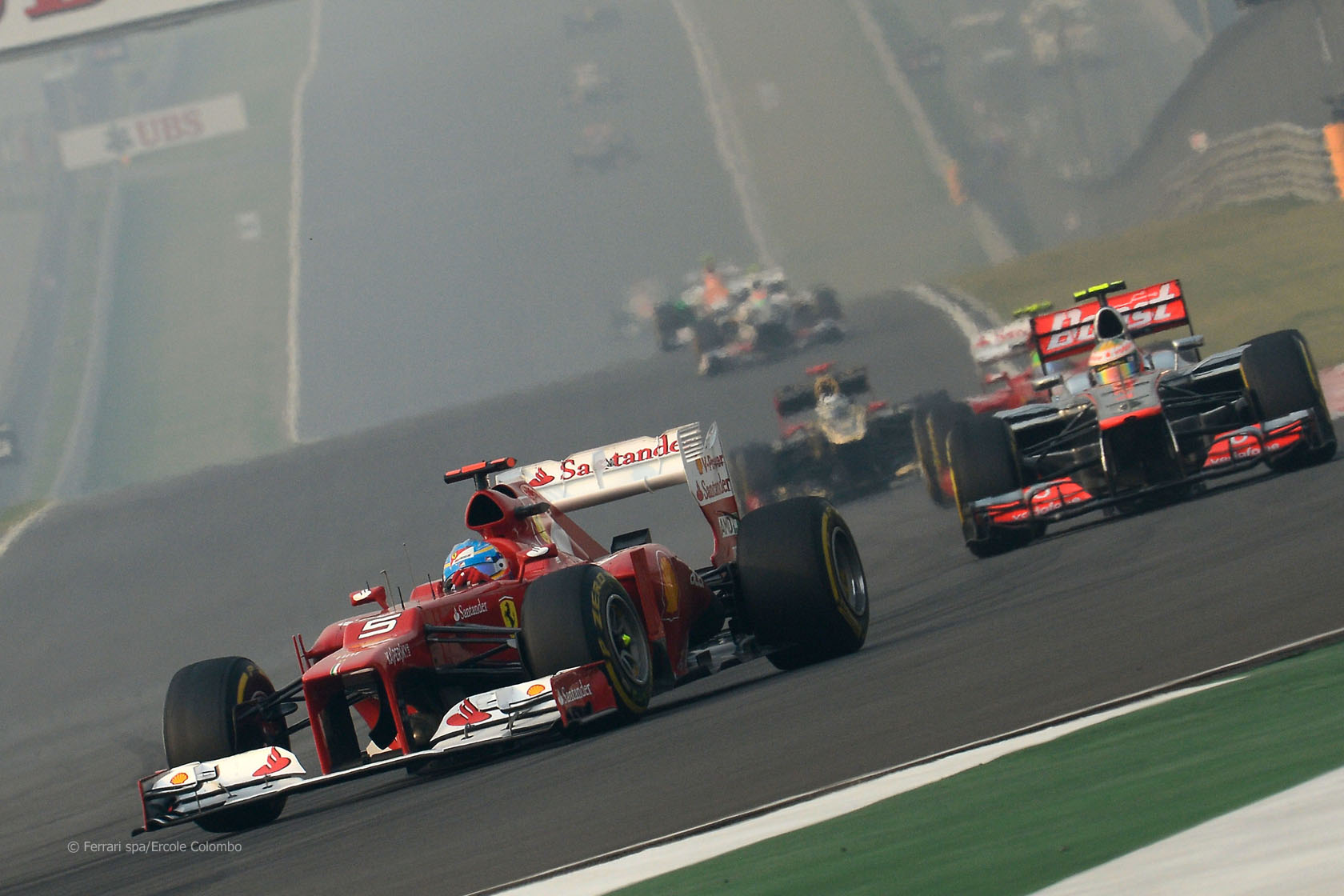 Fernando Alonso’s drive from fifth to second in the Indian Grand Prix earned him this third win in our Driver of the Weekend polls this year.

Race winner Sebastian Vettel featured in the top three in the poll for the fourth race in a row, with Williams’ Bruno Senna third.

Having qualified fifth Alonso passed Lewis Hamilton for fourth after the start and followed that with a move on Jenson Button for third. He then pursued Mark Webber and took advantage of the Red Bull driver’s KERS problems to finish the race in second place.

Alonso. I mean, this guy can stick to the target and make the best out of any situation! It?ů‘ťľ‘šůs uncanny! Getting that Ferrari to at least look on par with the Red Bulls at times is an award-worthy performance.
Antonio Nartea

They way he calculates an overtake is just mind-blowing. He could have out braked one of the McLarens after he got between them but decided to play it smart, slow in and fast out. Also if he didnt push he might have not been able to catch Webber when he got the KERS problem. Good inspiration and driving style to anyone involved in motorsport.
Nixon

Alonso for me. His display of dominance over both McLaren guys was very impressing to watch and somewhat of a rarity for us F1 fans. He kept good pace with the Red Bulls (as did Massa) which is probably the best you can ask of anyone not in an RB8 at the moment.
AndrewTanner

Vettel led every practice session and took his fifth pole position of the season in qualifying. After fending off Mark Webber when the lights went off he never looked back to secure his fifth victory of the season and extended his lead in the drivers’ standings.

You have Vettel doing business as usual, absolutely untouchable throughout the weekend, and leading every lap in what was a near-flawless race for him. I?ů‘ťľ‘šůve argued before that, even with the fastest car on the grid, it takes enormous concentration and effort to pull off a faultless performance like this weekend?ů‘ťľ‘šůs, and I stand by that assessment.
Bob

Vettel. After all he took the maximum out of the car, again, and almost achieved a Grand Chelem ?ů‘ťľ‘«£ which I always regard as the best indicator of a driver?ů‘ťľ‘šůs talent. His car had little problems towards the end but he struck me with his fastest lap on the final tour. He was so determined to achieve it and I was actually sad to see him beaten by Alonso and Button, although I am, like many, bored by the lack of variety in results since Vettel has re-started winning.
Fixy

Vettel was first in every single session this weekend. All five of them. No other driver has achieved that feat at a Grand Prix weekend in the 21st century.

If that doesn?ů‘ťľ‘šůt optimise Driver of the Weekend I don?ů‘ťľ‘šůt know what does.
Sharmin

Senna showed a decent turn of speed in practice but wasn’t able to convert that into a top ten start. However his race pace was good enough for him to pass team mate Pastor Maldonado in the early stages and claim a point for the tenth spot after another overtaking move on Nico Rosberg.

I felt Bruno Senna did well in the race, transformed his practice form into very good race pace. At the race he was generally quicker than Maldonado, and even Grosjean and Rosberg, showing very good pace. And he did a couple of very good overtaking, especially the one on Rosberg. For me his overtaking was the best bits of the whole boring race.
Goran

Fernando Alonso remains the driver to have appeared in the top three most frequently (it is his ninth time) and with three wins to his name, he has now matched Lewis Hamilton’s three wins in the poll.

Sebastian Vettel is close behind with seven top-three finishes, while Bruno Senna is not a stranger on the podium either – it is the third time he found himself amongst the most outstanding drivers of the weekend.