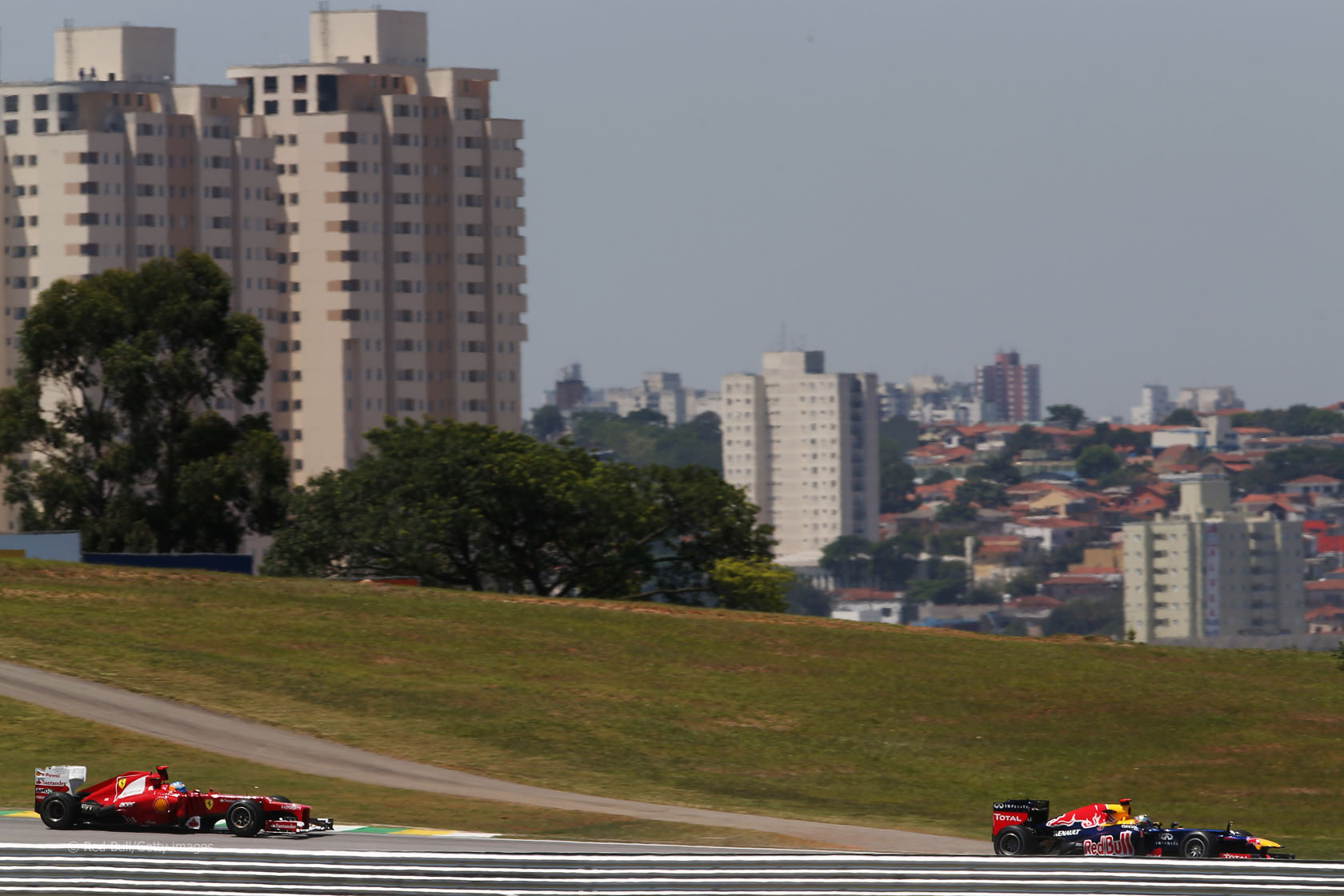 The championship-deciding Brazilian Grand Prix has the makings of a classic.

With the two title contenders starting outside the top three, the threat of rain and a track which produces drama, the 2012 season finale could prove a memorable contest.

While Sebastian Vettel insists he will approach this race like any other, it is Fernando Alonso who truly has nothing to lose as he strives to beat Vettel in the race to become the sport’s next thrice-champion.

For McLaren the race offers a chance to end the season on a high, for Hamilton to go out with a victory, and for them to take second in the constructors’ championship from Ferrari.

The cool front arrived as expected today but its effect on qualifying was confined to a shower before Q1. It appears likely the race will be affected by rain in some form, but that could be anything from occasional showers to a full-on downpour.

For Alonso the prospect of rain amplifies his opportunities in the race: “I think I did a good qualifying and, given how the last few races have gone, my chances of making it to the podium are still intact,” he said.

“That will be my objective because I know that, at least under normal circumstances, we are not in with a chance of fighting for the win. I also know that, if I am to have any hopes for the title, it?óÔéĽÔäós more plausible to count on a retirement for Vettel rather than for him to finish in a position where I can get ahead of him in the classification.

“Obviously, I am therefore hoping for a chaotic race and so the rain could be an important factor even if, in the wet, it is riskier for everyone.”

Hamilton is also conscious of the pitfalls that come along with wet weather: “If it?óÔéĽÔäós wet, the lead car is the always the first to aquaplane or hit the puddles, so, even if we both get good starts, we?óÔéĽÔäóll still need to be cautious. Equally, however, I don?óÔéĽÔäót want to drop back at the start because it would then be very difficult to see in all the spray.” From a standing start, the race through the first corners at Interlagos can be one of the most exciting of the season. The switchback Senna S and the blast down Reta Oposta provide plenty of opportunities for passing, and the action often goes on into Ferradura on lap one.

One significant change this year is the addition of a tarmac run-off on the outside of the Senna S, giving room for driers to take avoiding action while losing little time.

The short lap also means the leaders have little time to pull away before those chasing them can start using DRS.

This all assumes a dry or damp start to the race. If race control is concerned a wet surface may pose too many visibility problems for a standing start, the race will begin behind the safety car.

For the title contenders the opening laps will be about making as much ground as possible while staying out of trouble. Vettel will be especially anxious not to fall behind Massa or – worse – a fast-starting Alonso.

There’s always a special paranoia for a driver when dicing with a championship rival’s team mate – Michael Schumacher picked up a puncture while overtaking Fernando Alonso’s team mate at this track six years ago.

The top nine drivers on the grid plus Pastor Maldonado will all start on the medium tyres they qualified on, unless of course the start is declared wet, in which case they and everyone else may start on one of the two types of wet-weather tyre. If the track is wet enough for the race to start behind the safety car, all drivers will have to start on ‘full’ wet weather tyres rather than intermediates. Whatever the weather brings on Sunday it is unlikely to be a repeat of the dry, hot conditions the track saw on Friday when the teams did their race-fuel running, so that data is likely to be unhelpful.

The medium tyre is in the order of one second per lap faster than the hard, so expect that to be the preferred tyre if the race begins in dry conditions.

Those not obliged to start on it will most likely pick it anyway if they expect it’s going to rain, because once they switch to intermediate or wet-weather tyres they no longer have to use both dry compounds, so the requirement to use the less favourable tyre no longer applies.

One obstacle to Alonso’s progress has already been removed with Maldonado getting a ten-place grid penalty. He will also have to find a way past Nico Hulkenberg early on, and the Force India has had good pace this weekend.

Hulkenberg has also adjusted his car in anticipation of a wet race: “For tomorrow we are in good shape: I?óÔéĽÔäóve got quite a neutral set-up so we can cope with whatever weather we get.”

But Alonso will also have to watch out for attacks from behind. Kimi Raikkonen tends to be quicker in the races than in qualifying and lines up right behind him. And Sergio Perez, 12th, may also prove a threat if the race is hit by rain.

Besides his other rivals, Vettel will be concerned by his car’s reliability. An alternator problem ended Mark Webber’s race early in America, and the team are running new parts in a bid to avoid a repeat here.

Maldonado has fallen to 16th, two places ahead of Romain Grosjean, meaning two of this year’s more collision-prone drivers find themselves near the back of the grid and looking to make up ground early in the race.

How the championship can be decided

Here is how the world championship can be won by Vettel or Alonso in the race:

Vettel did not find as much time between Q2 and Q3 as his closest rivals, but his Q2 lap was aided by gaining a slipstream from Massa’s car in front of him.

For the second race in a row Alonso was out-qualified by Massa, leading to speculation that he has a ‘wet set-up’ on his car, which he denied: “The car is not particularly set up for the wet, as it?óÔéĽÔäós not like it used to be.”

Technical director Pay Fry explained the gap between the two drivers: “We did not give Fernando an equally good car in terms of balance and we will have to study the data to see how to improve the situation, within the bounds of possibility, for tomorrow?óÔéĽÔäós race.”

However Michael Schumacher said setting his car up for wet conditions was partly why he will start his final race from the middle of the pack: “We might have compromised the car too much for the rain which is expected for tomorrow and was also forecast for qualifying.”

Vettel admitted making a mistake on his first timed lap in Q3. With his second he needed to be a little conservative, but nonetheless set his three fastest sector times in that lap.

Few team mates differs widely in straight-line speed, which tends to indicate when they are running different downforce levels in an attempt to second-guess the weather.

The McLaren drivers ran different downforce levels on Friday, but both Hamilton and Button have opted for the higher-downforce solution. However, in marked contrast to recent races, they are now at the top of the speed trap figures, which will make them tricky to pass in normal conditions.

How do you think the race will unfold? And who will clinch the championship?

53 comments on “Threat of rain promises a tense title showdown”