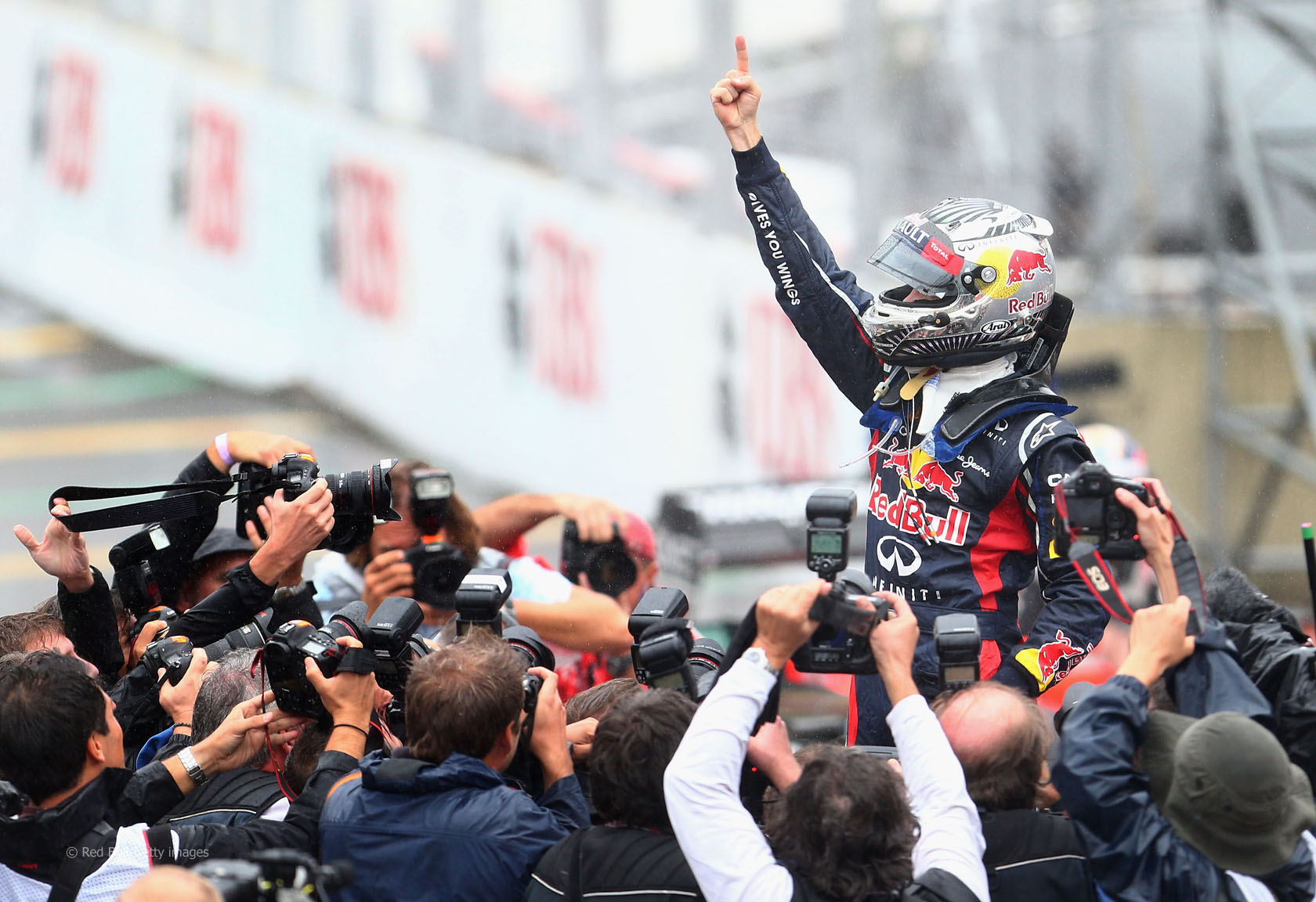 Relive the drama of the championship-deciding Brazilian Grand Prix weekend as it unfolded through the eyes of the drivers and teams.

F1 team have all arrived in Brazil. Hopeing for some changable weather to allow us to get 10th place back

Last day of prep before p1 and p2!Almost the end of the season, it’s gone so fast! After a 5 week stint it’ll be good to get home,

It seems Kimi Raikkonen is not going to make it to Interlagos today. He’s been delayed in LA. Can’t imagine why

Sauber confirmed Esteban Gutierrez as Kamui Kobayashi’s replacement in 2013, while Charles Pic confirmed for a transfer to Caterham from current rivals Marussia.

For all those asking: no, Sunday isn’t Lewis’s ‘last day in the office’. He has a few appearances & will go to MTC to thank everyone too.

This is what’s great about #INTERLAGOS how close you can get to the cars #BrazilF1GP twitter.com/F1Thommo/statu?óÔéĽ?Ş

Vettel and Alonso go side-by-side together through Mergulho – the title contenders getting racy early! #F1

“Can you see if my tyres are overheating I have absolutely no grip” “Yes Kimi the tyres are very hot, front and rear.” #F1

How would you like it if someone photographed the top of your head while you’re at work? Tough, you’re an F1 driver…. twitter.com/MyCaterhamF1/s?óÔéĽ?Ş

@f1fanatic_co_uk this is the crowd on grandstands by the main straight, great atmosphere here! twitter.com/marckanno/stat?óÔéĽ?Ş

Massa runs wide. Smedley says “I think you know what went wrong. The grip isn’t brilliant trying to take that amount of speed into turn six”

On the way to Hotel..! Some stretching session at the gym and dinner soon …! Million thanks for all the good wishes you are sending..

Nice interview on @skysportsf1 with my man… I especially love the fact he was wearing the ‘I ?ó?Ř?ń boobies’ bracelet I bought him ;)

Friday done. That was a manic day! #BrazilianGP

Kimi Raikkonen’s engine woes continued as his final practice session came to an early end. Jenson Button was fastest ahead of qualifying but was beaten to pole position by Hamilton. Vettel qualified fourth with Alonso eighth ahead of the championship showdown.

FP3 is on at #Interlagos. It is 28 degrees ambient today but more overcast. Track is 36 degrees – 12 less than yesterday. It might help!

“This is a different car today,” says Hulkenberg. “Much better.” #F1

Leave me alone, I’m sat on a chair. No lap time in FP3 for blown engine #Kimi. #FullBrazilian

Given the mixed conditions we’re expecting in qualifying, the pit garage is rammed with tyres: 2 x dry compounds, inters and wets.

Why did Lotus not change tyres with GRO for a set of fresh hot tyres ?! Mmhhh. Well, shame

“I had a little issue with the braking for turn one but nevertheless it wouldn’t have been enough,” says Schumacher #F1

Massa just told Italian TV “if they tell me my gearbox is broken, I’ll race with a broken gearbox.”

Happy with q3 laps and the usual position around 8th .. ;)! Now I hope many overtakes again tomorrow, and fight to the flag!! #forzaferrari

What an exciting Quali session here in Interlagos, just pipped by Lewis! Congrats to the whole team. Great to end the year as we started ;)

Xmas has come early? Well a 1-2 in Brazil feels like it. #BOOMTOWN #BelieveInMcLaren

Race day dawned overcast and rain fell shortly after the race began. The championship advantage swung back and forth between Alonso and Vettel after the Red Bull driver’s first-lap collision with Bruno Senna.

While Button excelled in the wet conditions for his third win of the year sixth place was enough for Vettel to seal his third championship title.

Arrived at the track and found this guy on the entry. Looks like he is on a mission twitter.com/realTimoGlock/?óÔéĽ?Ş

3 hours until go time in Interlagos. The latest weather update is in and it’s now reduced the chance of rain to around 20%….

very funny normally the mechanics have heavy metal music in the garage. At the Moment there are pre race Christmas songs….

The commentators’ choice of superlatives in the past 10 minutes: “extraordinary”, “superb”, “unbelievable”, “incredible”.. #f1 #BrazilianGP

Please let it rain in Interlagos…!

For some reason we are fighting the world championship that logic would say was impossible. Enjoy today and whatever happens.. Thank you all

Smedley to Massa: “Nice work mate we are P6, Kobayashi in front, let’s get him as well.” Not thinking of blocking Vettel, then. #F1

Kimi should have got a TomTom. Oh dear….

There you have it.. Vettel is World Champion! Personally I was routing for Alonso, but both deserved the title.

Three points are missing for a dream to come true…

Thank you #F1 for another great season and unforgettable year.

What a day. What a race. So proud of the work done. A real boost for the winter homework.