The first flyaway round of the world championship took place in Argentina on this day 60 years ago. But the race held at the behest of president Juan Domingo Peron ended in tragedy.

Following his inauguration as president of Argentina in 1946, Peron tasked the Automovil Club Argentino to bring Grand Prix racing to the country. Peron had swept to power on a wave of public support and, like the Nazi and Fascist military regimes he had observed in Europe before and during the Second World War, he understood the value of motor racing in inspiring the masses.

This was especially true when it harnessed the popularity of Argentina’s home-grown talents. Among the local drivers enlisted to provide competition for Europe’s top drivers was Juan Manuel Fangio, who had already triumphed in South America’s notoriously gruelling road races.

Over the following years Argentina’s Temporada race series became a fixture for European competitors, and soon Fangio and his cohorts were racing in Europe as well. In 1951 Fangio became the sport’s second world champion.

As 1953 began Peron’s fortunes had turned. His wife, the popular icon Eva Peron, succumbed to cancer in June the previous year, one month after his second inauguration. Economic decline was exacerbated by a serious drought.

But the first month of 1953 promised to give his popular appeal a much-needed boost. The Grand Prix cars were coming back, and for the first time ever the world championship was coming to Argentina.

This was the first true ‘flyaway’ round of the world championship outside Europe. Although the Indianapolis 500 had been part of the series since its inauguration in 1950 it was not regularly contested by Formula One drivers.

The ACA laid on a chartered flight to bring a dozen of the top drivers from Ferrari, Maserati, Gordini and Cooper across the Atlantic.

Among those embarking on the 36-hour journey was reigning champion Alberto Ascari. He headed the four-car Ferrari team including 1950 champion Giuseppe Farina, Luigi Villoresi and Mike Hawthorn, the latter making his debut for the team.

Maserati’s Felice Bonetto was on his way to join a trio of local drivers, led by Fangio. The first world championship race in Fangio’s home country would also mark his return to racing after suffering back injuries at Monza the previous June.

Fangio was joined at Maserati by two compatriots. His great road racing rival Oscar Galvez was making his first appearance in the world championship. The final Maserati pilot was Jose Froilan Gonzalez, who was already a race winner with Ferrari.

Among the teams not making the trip were Connaught and HWM. Stirling Moss, who already had six world championship starts to his name, remained in Europe testing a Sunbeam Talbot for the forthcoming Alpine Rally.

The entry list was bolstered by local drivers Adolfo Schwelm-Cruz (Cooper), Carlos Menditeguy (Gordini) and Pablo Birger (also in a Gordini, but a two-year-old model). With just 16 participants, this was one of the smallest entries ever assembled for a Grand Prix.

For the prestigious race Peron had commissioned the building of a new circuit. The Autodromo Municipal 17 de Octubre was named after the day his supporters had rallied to demand his release from jail eight years earlier. It was celebrated every year as Loyalty Day.

Work began on the track after Fangio won the 1951 title. Built in ten months, the circuit offered multiple configurations and promised to accommodate hundreds of thousands of spectators.

To ensure they appeared, major streets and junctions in Buenos Aires were plastered with posted. Loudspeakers blasted passers-by with news of the upcoming race. 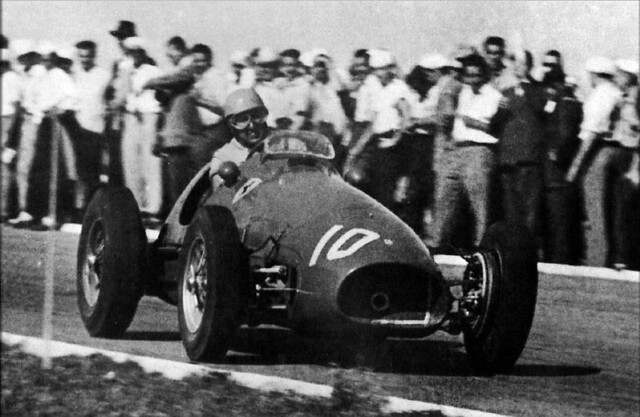 In 1952 the lack of available Formula One cars meant most Grands Prix were run to Formula Two rules. The practice continued in 1953, and that played perfectly into Ferrari’s hands.

Ascari had dominated the 1952 season with his 500 F2. Arriving in Argentina he had won the last six world championship races in a row.

Practice for the opening race of the season offered some hope that he might not have things all his own way this time. Ascari took pole position, lapping the 3.9km (2.4-mile) circuit in 1’55.4, aided by an uprated engine.

Ascari’s car was 20kg heavier than the 1953-specification Maserati A6GCM. Fangio hustled his machine around within seven-tenths of a second of the pole position time and took second on the grid.

The 41-year-old now adopted a hunched stance at the wheel, a legacy of the injuries he suffered the previous year. But the presence of two more Ferraris on the front row with the next Maserati of Gonzalez over three seconds off the pace showed Fangio had lost none of his speed following his accident.

“My children, let them in!”

Decades before Twitter or even live television broadcasts, coverage of the race was hard to come by. Sixty years on that makes establishing the details of what happened all the more difficult.

That even extends to what colours the cars were. Some reports claim Enzo Ferrari allowed Hawthorn to make his Grand Prix debut in a Ferrari painted in British racing green. It seems doubtful and it’s hard to find out for sure.

The same applies to more serious matters. Estimates of the number of people who turned up at the track on January 18th 1953 vary from 300,000 to 400,000 – some even suggest as many as half a million people were packed into the circuit.

Hours before the race the stands were full, the crowd baking in 37C heat. And still more were trying to get in. Wire-cutters appeared and thousands poured through holes in the fences. With the stands full, they sat by the edge of the track.

The police were unable to contain the growing numbers surrounding the circuit, who stood on the grass verges along the edge of the tarmac. More than one source claims it was Peron himself who told the police to abandon their efforts to resist the mass of people who wanted to see the race. “My children, let them in,” were his words as reported by Robert Daley.

As the 4pm start time drew near the drivers became edgy. Some wanted to postpone or abandon the start. The circuit now represented a rally stage, thick with people on either side of the track. The realisation dawned on the drivers that the alternative – not putting on a race – might provoke a riot. So they raced.

Ascari led the cars away, pursued by Fangio. But as the race began the crowd pressed forward, encroaching onto the track (see the image in this article).

“Time after time I waved at them to get out of the way, but this only made them worse,” said Hawthorn afterwards. “They began standing in the roadway holding shirts and pullovers, which they snatched away at the last moment like a toreador playing a bull”.

The situation grew ever more tense. On lap 21 a stub axle broke on Schwelm-Cruz’s Cooper and the wheel bounced into the crowd.

Eleven laps later disaster struck. Farina, who had been running third, pitched his car into a spin as a figure darted out in front of him at the Curva Nor Este. The Ferrari spun off the road, toppling bodies as it cut into the crowd.

News of the fatalities spread swiftly, inciting mass panic. Another boy ran in front of Brown’s Cooper and was struck down and killed. Ambulances heading to the dead and injured were involved in further crashes.

The race continued, with Ascari and his pursuers passing the accident scenes every two minutes for the next two hours. Fangio retired with a transmission problem shortly after Farina’s crash. Peron quietly left the circuit.

The chequered flag finally brought an end to the race after three hours. Ascari finished a lap ahead of everyone else. Gonzalez was the first Argentinian driver home in third place behind Villoresi.

Hawthorn was fourth ahead of Galvez. Brown pressed on until the end in his Cooper, its nose bent and the car requiring three pit stops to refill its radiator.

It’s hard to imagine the horror of what went on at this race about which many details are sketchy and little video footage apparently exists.

Officials claimed that ten people were killed and 30 more injured. Accounts vary and some put the number of those who lost their lives as high as 30. That would make this the deadliest Grand Prix that ever took place.

Two weeks later a non-championship race was held at the track, using a longer variation of the circuit. With two major football matches going on in the city on the same day the attendance was lower and the army was deployed to ensure the crowd was kept in check. The race passed without incident.

Ascari had begun what proved to be a successful championship defence. He had also claimed his seventh consecutive victory, and by winning his next two starts he set a record which stands to this day for most consecutive wins.

Peron was not the first ruler nor the last to stage a Grand Prix for political ends. The Argentinian Grand Prix continued to open the world championship until 1960 (except in 1959).

By then a coup had forced Peron from power. He was living in exile, and his track was no longer called the Autodromo Municipal 17 de Octubre.

Thanks to @fer-no65 for assisting with the research for this article.