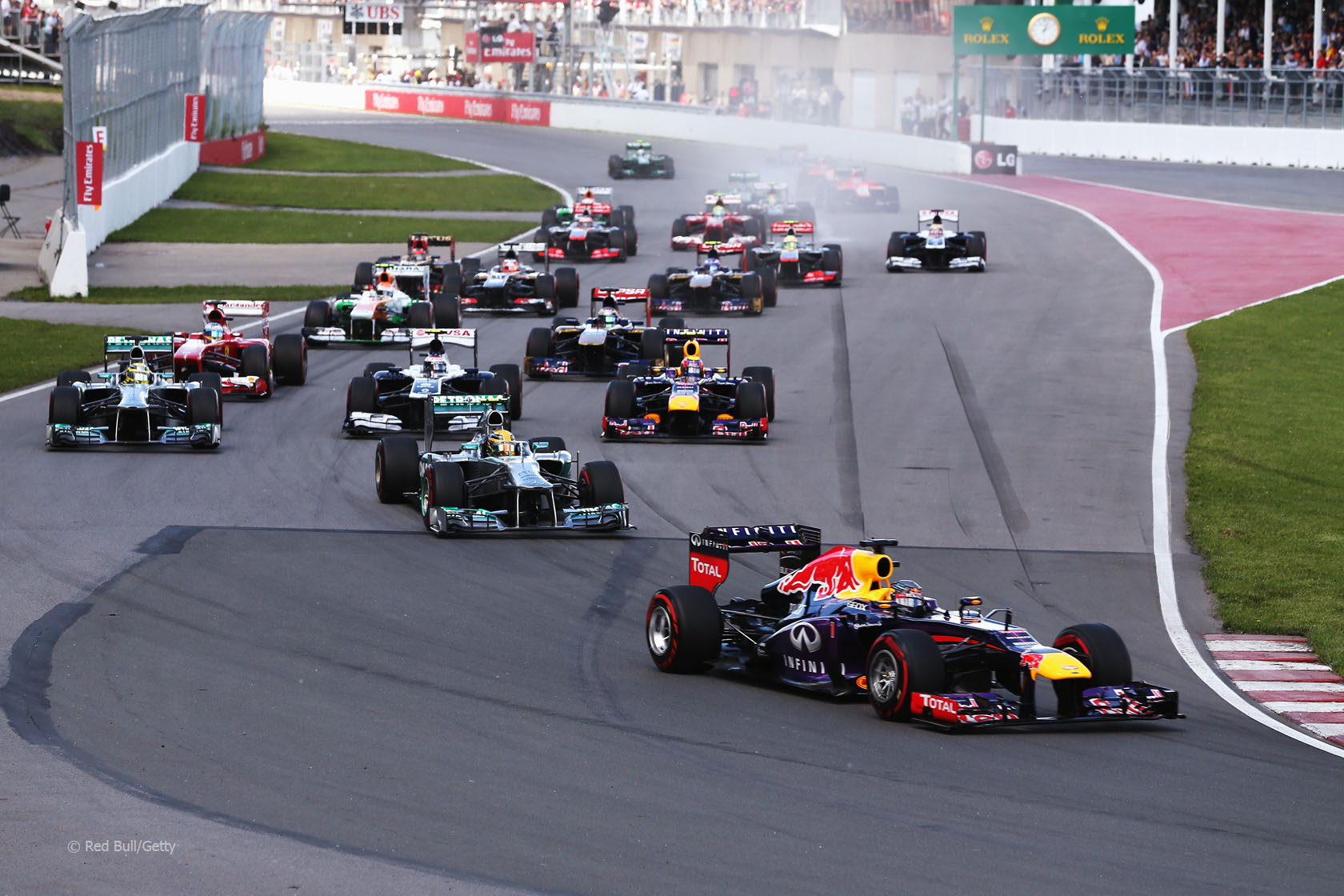 Which F1 driver was the best performer during the Canadian Grand Prix weekend? Sebastian Vettel – A tidy lap early on in Q3 secured his third pole position of the season. Made good his escape in the opening laps of the race but it looked a bit hairy at times as he dealt the turn four wall a glancing blow and went straight on at turn one later in the race. Brought the car home for his first win in Canada and boosted his points lead.

Mark Webber – Was in the hunt for a podium until Van der Garde turned in on him while he was trying to put the Caterham a lap down. The front wing damage and time lost left him vulnerable to Alonso, yet he was still able to set the fastest lap.

Fernando Alonso – Sixth on the grid was his worst qualifying performance at the Circuit Gilles Villeneuve since his Minardi days. He picked off Bottas on the first lap and made further gains in the race, passing Webber and Hamilton thanks partly to their delays in traffic but also aided by the Ferrari’s excellent straight-line speed. Its one-lap pace remains a weakness however, one he says the team “absolutely must improve on”.

Felipe Massa – Suffered his third major crash in two weeks during qualifying which left him 16th on the grid. But made several passes in the opening laps which brought him up into the points-paying positions. Overtook Raikkonen on the penultimate lap but still finished behind Di Resta who he started the race ahead of. Jenson Button – Missed out on doing a high-fuel run in second practice due to a gearbox problem. Starting 14th he ran a long first stint, patiently waiting for the graining to subside on his super-soft tyres. But he wasn’t able to gain enough ground to make his subsequent stint on medium tyres pay off.

Sergio Perez – Finished ahead of Button but dropped too far back from Massa in his final stint to take advantage of Sutil’s drive-through penalty and claim a point.

Kimi Raikkonen – His eagerness to gain places at the pit exit during qualifying got the better of him. But the two-place grid penalty he incurred only ended up costing him one spot. Having endured a luckless race with brake problems, high fuel consumption and a slow pit stop he then lost eighth place to Massa on the penultimate lap.

Romain Grosjean – His ten-place grid penalty from Monaco had little effect as he only qualified 19th after backing off for a yellow flag in Q1. He started on medium tyres and rose as high as eighth at one stage. But he wasn’t able to make his tyres last long enough to complete the race with a single stop, and his second visit to the pits left him well out of the points. Nico Rosberg – Rosberg’s run of pole positions came to an end as his radio failed during qualiying, robbing him of vital contact with the pit wall in a session where conditions were constantly changing. From fourth on the grid he slipped back to fifth in the race, visibly struggling with his tyres and the only finisher to make three pit stops.

Lewis Hamilton – Despite still being unhappy with his car’s braking performance Hamilton was in his usual excellent form at the Circuit Gilles Villeneuve. He claimed another front row start and looked after his tyres far better than his team mate. But he wasn’t able to keep Alonso from taking second, thanks in part to the antics of Sutil.

Nico Hulkenberg – Sauber admitted making an error in preparing Hulkenberg’s car on Friday as a result of which he spent most of the two sessions complaining out bottoming. He fared well in qualifying thanks to wet conditions but the race was dry and the Sauber proved too harsh on its tyres once again. He was nowhere near the points when he went out in a collision with Van der Garde. Although the Caterham had spent a lap holding him up, Hulkenberg was partly to blame for their race-ending contact as he left Van der Garde too little room as he came by.

Esteban Gutierrez – Another driver who tried to make a one-stopper work but couldn’t. Gutierrez overdid it after he left the pit lane following his second stop and crashed out.

Paul di Resta – Fastest in the wet first practice session, then lost time with an electrical problem in the second. For the second weekend in a row he was eliminated in a wet Q1, this time after being delayed by a gearbox problem. Amends were made on Sunday when a well-judged one-stop strategy lifted him ten places to seventh. Still he must wonder what might have been.

Adrian Sutil – The same could be said of his team mate, who qualified well but slipped backwards in the race, beginning when he spun while trying to pass Bottas. Nudged by Maldonado at the hairpin, he carried rear wing damage for the rest of the race. Later on he took too long letting Hamilton lap him – the Mercedes driver shouting for “blue flags” on the radio – and was given a drive-through penalty. Pastor Maldonado – Collected a penalty for his contact with Sutil after which he was always going to struggle to rejoin the midfield battle without a Safety Car appearance.

Valtteri Bottas – A special qualifying performance saw him take third on the grid in wet conditions despite not having driven the track before. He was always going to struggle to hold on to that position in dry conditions. Despite firm-but-fair defensive driving he was powerless to stop the bulk of the midfield overtaking him.

Jean-Eric Vergne – There were two keys to Vergne’s best-ever race result of sixth: a great performance in the wet qualifying session, and his pass on Bottas which helped him gain ground over his pursuers. He then covered Di Resta’s pit stop late in the race to protect his position from the Force India.

Daniel Ricciardo – Joined his team mate in Q3 but picked up the same penalty as Raikkonen. He never got on top of his car’s balance in the race, struggling with oversteer and falling back to 15th.

Charles Pic – Impressed in qualifying by beating Grosjean’s time in Q1. But on a two-stop strategy he fell behind the one-stopping Marussias. He was able to overtake Chilton but not Bianchi.

Giedo van der Garde – Made a great start, gaining four places, but drew more attention to himself by committing two errors while being lapped. He was entirely to blame for the incident with Webber and received a ten-second stop-go penalty as a result. Then came the collision with Hulkenberg for which the Sauber driver was at least partly to blame, but Van der Garde should have let him go much sooner.

Jules Bianchi – Rued missing most of first practice on a track he hadn’t driven on before after he went off at turn three: “I got caught out on a damp section of the track,” he said. However he out-qualified Chilton as usual and finished ahead of Pic thanks to his one-stop strategy.

Max Chilton – Had a good stint on the medium tyres, less so on the super-softs where he began to lose grip and was passed by Pic.

Who was the best driver of the 2013 Canadian Grand Prix weekend?