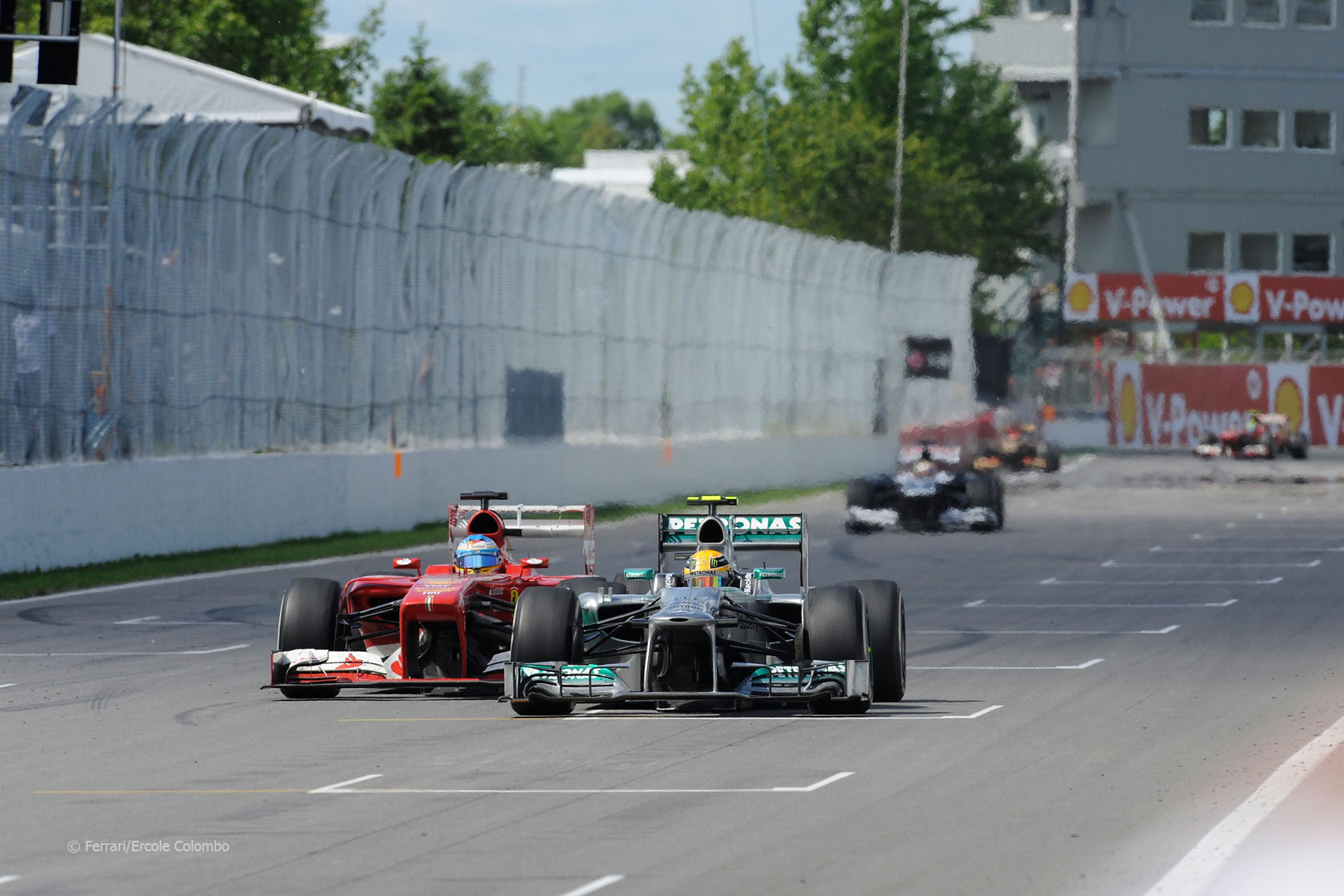 Ten of the best pictures which tell the story of the Canada Grand Prix weekend. Force India’s 100th Grand Prix appearance was an up-and-down affair for Paul di Resta. Fastest in first practice on Friday, he was bumped out in the first round of qualifying for the second race in a row on Saturday.

He bounced back superbly during the race, making a single pit stop as he made up ten places to finish seventh. As the race gets underway leader Sebastian Vettel is already out of shot while Valtteri Bottas – who qualified a superb third – comes under attack from both sides. Bottas clung on as long as he could but it was to no avail – Fernando Alonso also demoted him on the first lap. The other Williams negotiated their hairpin less successfully. Pastor Maldonado ran into the back of Adrian Sutil, damaging his front wing and Sutil’s rear wing, and was handed a drive-through penalty. Monaco winner Nico Rosberg fell into the clutches of Mark Webber, who in turn was under pressure from Alonso. Both passed the Mercedes driver, who had to make three pit stops. McLaren in the wilderness. Sergio Perez and Jenson Button could only manage 11th and 12th – the first time McLaren have failed to score a point since the 2009 Abu Dhabi Grand Prix. Jean-Eric Vergne impressed with a career-best sixth place after scrabbling past Bottas early in the race. In a reversal of last year’s race, Lewis Hamilton found himself under attack from Alonso in the closing stages. On lap 61 they both slowed as they approached the DRS detection line – each trying to be the second driver across it – but Alonso got the boost and sailed past into second place. It just wasn’t Kimi Raikkonen’s weekend. He picked up a penalty in qualifying then in the race he had problems with his brakes and high fuel consumption and lost time at his first pit stop due to a problem with his rear jack. He ended the race with Felipe Massa on his tail and was passed for eighth on the penultimate tour. Vettel clinched his third win of the season in emphatic style and increased his lead in the drivers’ championship.