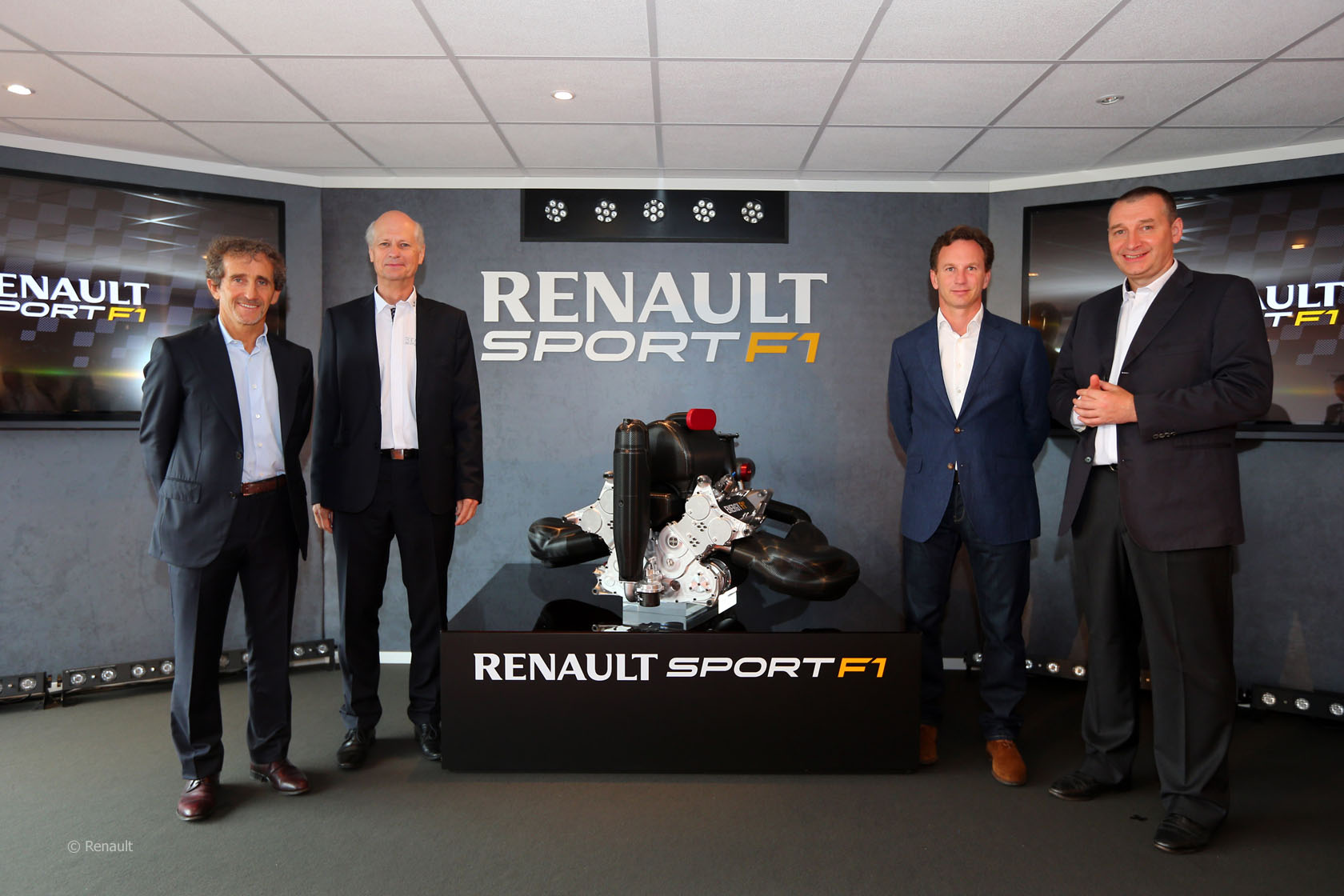 Renault have revealed the engine which their teams will use during the 2014 F1 season.

President of Renault Sport F1 Jean-Michel Jalinier introduced the new power unit, named Energy F1: “From next year, one of greatest challenges in F1 will be to maximise energy efficiency and fuel economy while maintaining the power output and performance expected of F1 cars.”

“Renault has pioneered this technology in its road car engine range with the Energy series. Naming the power unit Energy F1 creates an unbroken range, from the Clio through to our competition department.”

Renault engines have powered the world championship-winners for the last three seasons. They will continue to supply reigning champions Red Bull next year as well as Toro Rosso.

The complete engine unit for 2014 will be heavier than the current design, as director of programmes and customer support Axel Plasse explained:

“The current V8 is 95kg, 100kg if you add the weight of the MGU. This increases to 120kg when you include the ancillary parts, such as the radiators and other cooling devices. With the 2014 power unit, the V6 turbocharged engine will be a minimum of 145kg, plus 35kg for the battery. At 180kg, this is a 80% increase over the current units, plus a further 20kg for the ancillaries such as the intercooler and other radiators.

In response to speculation over how the new engines will sound, Renault have released an audio clip of theirs being revved. Deputy managing director (technical) said the engine will retain an appealling sound: “The sound of the engine is the sum of three principal components, exhaust, intake and mechanical noise. On fired engines, exhaust noise dominates, but the other two sources are not trivial and would be loud if the exhaust noise was suppressed and contribute to the perceived sound of the engines in the car. “All three sources are still present on the V6. At the outset, there is more energy in each combustion event but there are fewer cylinders turning at lower speed and both intake and exhaust noise are attenuated by the turbo. Overall, the sound pressure level (so the perceived volume) is lower and the nature of the sound reflects the new architecture.

“The car will still accelerate and decelerate rapidly, with instant gearshifts. The engines remain high revving, ultra high output competition engines. Fundamentally the engine noise will still be loud. It will wake you from sleep, and circuit neighbours will still complain. The engine noise is just a turbocharged noise rather than a normally aspirated noise: you can just hear the turbo when the driver lifts off the throttle and the engine speed drops.

“I am sure some people will be nostalgic for the sound of engines from previous eras, including the preceding V8, but the sound of the new generation power units is just different. It?óÔéĽÔäós like asking whether you like Motorhead or AC/DC. Ultimately it is a matter of personal taste. Both in concert are still pretty loud.”