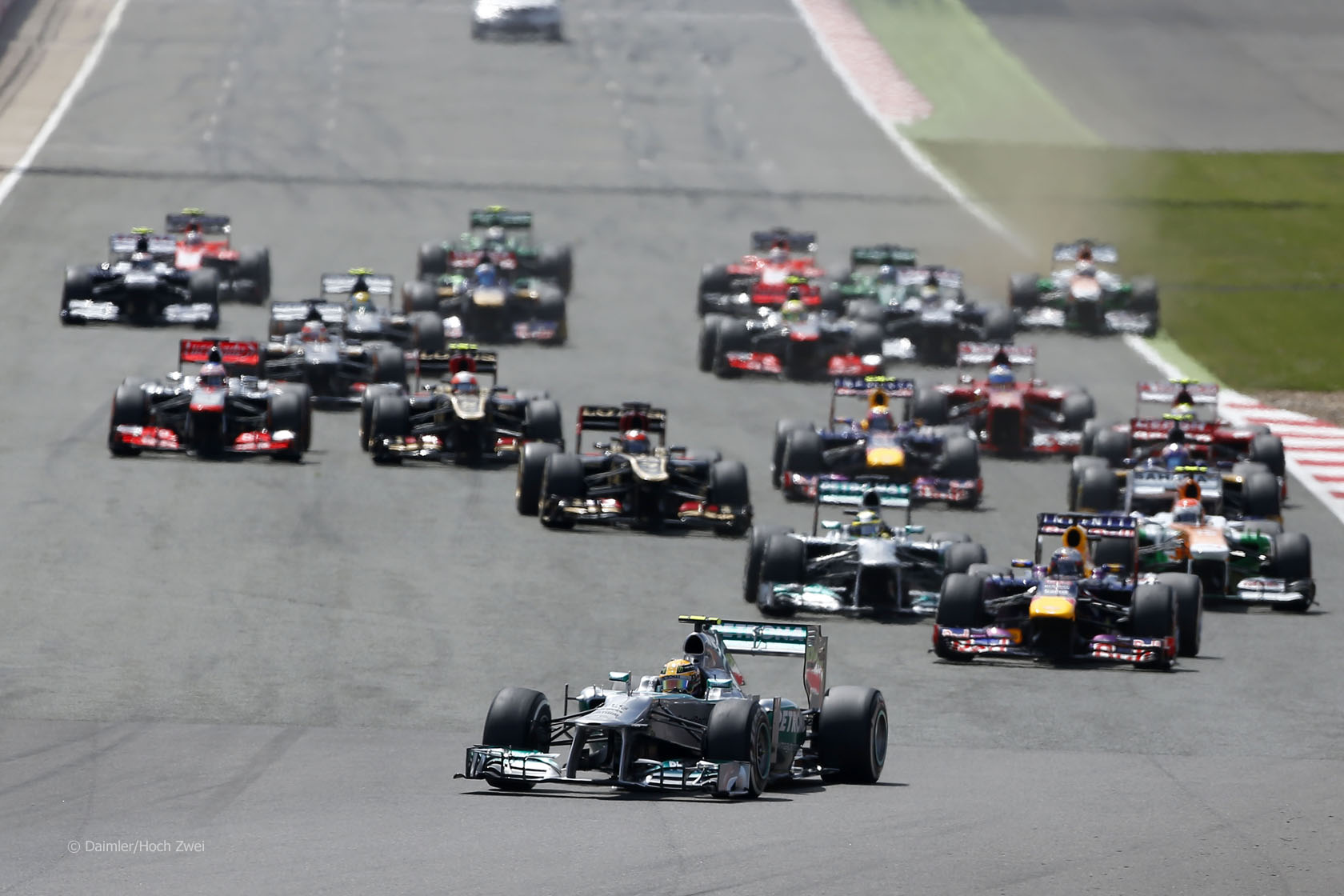 Which F1 driver was the best performer during the British Grand Prix weekend?

Sebastian Vettel – Said Hamilton’s pole position lap was “phenomenal” and “wasn?ů‘ťľ‘šůt in reach” for the Red Bull. He extended his unbeaten run against Webber in qualifying, though by the smallest margin so far, and took third on the grid. Having passed Rosberg at the start he assumed the lead after Hamilton’s early puncture. He responded to early pressure from Rosberg after the first Safety Car and had a steady three second lead when his gearbox failed on lap 41.

Mark Webber – Having got off the line well in Monaco and Canada, Webber made a dreadful getaway at Silverstone. Contact with Grosjean at the first corner broke his wing and he fell to 14th, but gained three spots before pitting. He passed Perez and Grosjean during his second stint and Red Bull took advantage of the final Safety Car deployment to put him on a fresh set of tyres for the final blast. He wasted no time passing Ricciardo, Sutil and Raikkonen and closed on leader Rosberg, finishing within a second of the Mercedes having set fastest lap on the final tour.

Fernando Alonso – After qualifying on the fifth row Alonso said Ferrari hadn’t improved their car quickly enough and suggested Pirelli’s tyre choices were favouring their rivals. He narrowly avoided a puncture as his tyre began to disintegrate as he pitted on lap ten. And he was relieved to escape injury when Perez’s tyre exploded in front of him with six laps to go. Although pitting shortly before the second Safety Car came out was a setback that cost him several places, it also gave him the advantage of fresh tyres at the end of the race, which he used to pass a string of rivals and claim the last podium place.

Felipe Massa – Massa racked up his fourth crash in three race weekends during second practice, and an engine problem on Saturday morning cost him more running time. Come qualifying, he was unable to make it into Q3. It looked like things were finally going his way when a superb start propelled him to sixth from eleventh. But his left-rear tyre failed on lap ten, causing a spin which left him last for 11 laps. The Safety Cars helped him come back into contention – particularly the last one, during which he put on a new set of tyres and subsequently climbed to sixth. Jenson Button – Both McLaren drivers failed to reach Q3 again. Button elected to start on the hard tyres but quickly suffered front and rear graining and was passed by Perez and Webber. He was a sitting duck on worn tyres at the final restart, losing three places in one lap and finishing out of the points.

Sergio Perez – Perez was the first driver to experience a left-rear tyre failure during final practice. Tyre warm-up was a problem for him during qualifying, and getting called into the weighbridge didn’t help matters. He ran a different strategy to his team mate which seemed to be working better. But after the final restart he suffered his second puncture of the weekend and the team chose to retire his car.

Kimi Raikkonen – Raikkonen was the only Lotus driver to run the team’s new Drag Reduction Device, but he was out-qualified by his team mate for the first time this year. He got ahead of Ricciardo at the start but was jumped by Alonso at the first round of pit stops despite Lotus producing one of their better efforts. He also lost out to his team mate, though the team quickly ordered Grosjean to move aside. But they weren’t alert to the possibility of bringing Raikkonen in during the final Safety Car. Defenceless on worn tyres, he fell from second to fifth.

Romain Grosjean – Grosjean picked up front wing damage early in the race and after being told to let Raikkonen past began to experience problems with his tyres. He was passed by Ricciardo and Webber at Brooklands on consecutive laps. He did take on fresh tyres for the final restart but his front wing eventually failed and Lotus retired his car. Nico Rosberg – Couldn’t match Hamilton in qualifying and was beaten off the line by Vettel. Hamilton’s puncture promoted him to second and Rosberg almost suffered one as well. While chasing Vettel during the second stint he felt a problem with his left-rear tyre was developing. Vettel’s retirement served to both hand Rosberg the lead and give him the chance to make a pit stop without losing his newly-won advantage. He had enough in hand to keep Webber at bay and escaped a penalty for going to quickly under yellow flags – the stewards gave him a reprimand.

Lewis Hamilton – Wasn’t happy with his car’s balance in practice but a superb lap in qualifying secured his second pole position of the year. Vettel was just beginning to edge into his two second lead when Hamilton’s left-rear tyre exploded, robbing us of an intriguing battle. It dropped him to last, but he quickly gained ground due to the Safety Car. He ran a long middle stint on hards and changed tyres for the last time five laps before the last Safety Car period. He dispensed with Di Resta and Grosjean before the final charge to the flag during which he took four more cars, ending up passing Raikkonen for fourth.

Nico Hulkenberg – Felt 15th on the grid was “more or less the best we could do”. A slow puncture forced an early second pit stop on lap 25, which put him on a three-stop strategy. The final Safety Car reduced the disadvantage of this and allowed him to finish tenth for Sauber’s first point since China. It might have been two had he not run wide at the restart, losing a place to Di Resta.

Esteban Gutierrez – Was knocked out in Q1 for the fifth time in eight races: “It seems I am losing a lot of time at the exit of the corners,” he said, “and this is tricky, because that is usually when I try to push and get things right.” In the race he also had a tyre failure which destroyed his front wing. A pit stop to replace it left him back among the tail-enders.

Paul di Resta – Having failed to progress beyond Q1 in the last two races, Di Resta was “over the moon” to equal the best qualifying performance of his career by taking fifth place. Then came the news he’d been thrown out of qualifying for being underweight. From 22nd on the grid he passed the Caterham, Marussia and Williams drivers early on, and gained a series of places after his first pit stop to hold 11th after the first Safety Car period. His progress slowed from then on, though he battled gamely with Hamilton, and eventually took two points for ninth.

Adrian Sutil – Ran in a podium position during the middle part of the race, resisting pressure from Alonso. Running a two-stop strategy the team left him out for three laps after Alonso’s second stop, dropping Sutil behind the Ferrari as well as Raikkonen. They also declined to bring him in during the final Safety Car which brought him back up to third but he was passed four times in the subsequent run to the chequered flag.

Pastor Maldonado – Blamed Hulkenberg’s off at the final restart for losing him two places and with it the chance of scoring the first points of the year for Williams.

Valtteri Bottas – After his Canada heroics he was unable to drag the FW35 into Q2 at Silverstone. Struggled with his set-up. Jean-Eric Vergne – Vergne was disappointed to miss the top ten shoot-out in qualifying: “I made a mistake on my quick lap in Q2 and that?ů‘ťľ‘šůs the plain fact and I?ů‘ťľ‘šům very upset about it, as it lost me the chance to get into Q3 which was definitely possible.” His tyre explosion on lap 14 caused damage to the rear of his car which ultimately forced the team to retire him.

Daniel Ricciardo – Admitted he was surprised to qualify as high as sixth, which became a career-best fifth after Di Resta’s penalty. He held seventh for much of the race, passing Grosjean on the way. But he was among the drivers who did not make a late pit stop under the Safety Car and suffered for it, slipping from fourth to eighth at the end of the race.

Charles Pic – Conclusively won the ‘battle at the back’, out-qualifying his team mate and the Marussias and leading them home. Was ahead of Bottas at the final Safety Car period but couldn’t keep the Williams behind.

Giedo van der Garde – As he was carrying a grid penalty from Canada the team only gave him a perfunctory tun in qualifying to save tyres. He spent much of the race battling Chilton, and lost. ” I did pass him with a couple of laps left, but it was very tight on track and I had to give the place back which is obviously a shame,” he said.

Jules Bianchi – Reprimanded for failing to stop at the weighbridge during qualifying. He fell behind Chilton at the start but immediately repassed him and went after Pic, but never quite had the pace to get on terms with the Caterham.

Max Chilton – “A day that I will never forget,” said Chilton after his home race. Kept Van der Garde behind at the end despite having tyres that were eight laps older.

Who was the best driver of the 2013 British Grand Prix weekend?