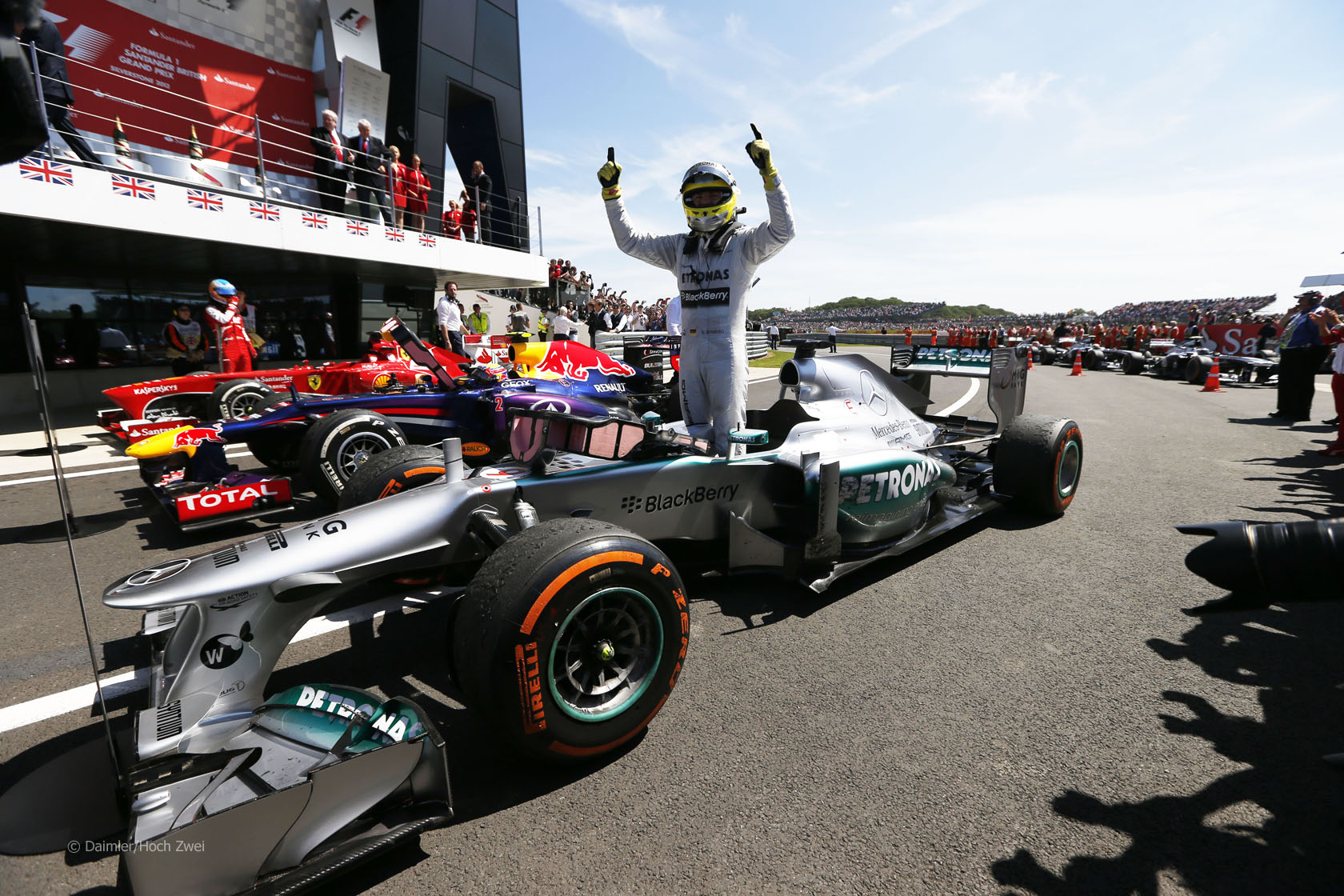 It’s little over a week since Allan Simonsen lost his life in a crash a few minutes after the start of the Le Mans 24 Hours.

On the first day of running at Silverstone the Formula One community assembled beneath the podium beside a portrait of Mark Robinson, the Canadian marshal who died in the aftermath of the previous round while Esteban Gutierrez’s car was being recovered.

A few hours before the start of today’s British Grand Prix came the sad news that another driver, Andrea Mame, had suffered fatal injuries in another sports car race in France.

Despite the efforts of all involved in motor racing to make it safer there is and will always be a degree of risk for competitors, circuit workers and spectators. A spate of explosive tyre failures at high speed during today’s British Grand Prix rammed that message home, and the sport should consider itself lucky nobody was hurt. The first sign of trouble came on Saturday morning when Sergio Perez’s left-rear tyre failed during final practice. The rest of the day passed with a repeat.

Eight laps into today’s race came the first indication that Perez’s problem had not been a one-off. Lewis Hamilton had converted his second pole position into the lead and was edging away from Sebastian Vettel’s pursuing Red Bull.

But as he headed down the Wellington Straight, where speeds exceed 280kph (174mph), his left-rear tyre disintegrated, forcing Vettel to take avoiding action. The implications of Hamilton’s disaster were just beginning to sink in when, two laps later, Felipe Massa spun off the track at turn four, his left-rear tyre also destroyed.

Ferrari wasted no time summoning Fernando Alonso into the pits where they discovered one of his tyres was also on the verge of a potentially catastrophic failure. “For me it was the right rear that I think was new compared to all the other failures and if this happened like Felipe ?óÔéĽÔÇŁ that I think was in turn five when it happened ?óÔéĽÔÇŁ then I lose the race,” he said. “For me it happened in the last corner and I pit.”

Most drivers hurried into the pits by lap 12. One who didn’t was Jean-Eric Vergne, who was now running in sixth place ahead of the two Lotuses. Unlike most drivers he had started on the hard tyre, and those who had suffered failures had all been on the softer compound.

But on lap 14, as he touched 300kph at the end of the Hangar straight, Vergne’s left-rear let go. As the tyre tore itself to pieces it showered the pursuing Kimi Raikkonen and Romain Grosjean with debris.

This third failure drove race director Charlie Whiting to summon the Safety Car and neutralise the field. He later admitted he considered red-flagging the race to get the situation under control.

“You’ve got to stay off the kerbs”

While the drivers trailled the Safety Car the teams took the chance to report back on the condition of the tyres they had just taken off.

Red Bull told Vettel they had found cuts on the medium compound tyres he started the race on, which had also been used during qualifying. “You’ve got to stay off the kerbs,” urged race engineer Guillaume Rocquelin.

Behind Vettel was Nico Rosberg, who’d made a sluggish getaway from second at the start and fallen behind the Red Bull.

But that was nothing compared to Mark Webber’s troubles. Afflicted by another of his poor starts he had been swamped by his rivals. Glancing contact with Romain Grosjean’s Lotus left Webber’s front wing askew and it wasn’t fixed until his first pit stop. Before that he’d fallen as low as 14th, but had been able to pass both Saubers plus Jenson Button’s McLaren.

Behind Rosberg were Adrian Sutil and Alonso’s Ferrari. The latter had overtaken Grosjean on lap two then jumped the other Lotus of Raikkonen along with Daniel Ricciardo during his pit stop. The race resumed on lap 22. By this time there had been three major failures in fourteen racing laps and it was hard to imagine there not being any more over the course of the remaining thirty.

The sense of foreboding about the potential for another failure was not eased by the obvious fact that several drivers were not keeping off the kerbs as instructed.

One of them, despite his team mate’s failure and his own near-miss, was Alonso. He was not convinced the kerbs were to blame: “It?óÔéĽÔäós hard to believe that the kerbs were the problem because we?óÔéĽÔäóve been racing here for 12 years with those kerbs”, he said afterwards. Besides which, he had Vettel in sight and was anxious not to lose any further ground.

Rosberg’s experience seemed to validate Alonso’s point of view: “I was staying off the kerbs and I got a tyre problem myself,” he explained. Mercedes had warned him the warmer temperatures of the race together with the kerbs might be causing the problem.

“But it worked out well,” Rosberg added. “I was able to pit before it broke apart because the safety car came out. I was a bit lucky there.”

He certainly was. Rosberg was just over three seconds behind Vettel when he felt his left-rear tyre going off. But he was saved on lap 41 by the only surprise of the race that had nothing to do with tyres.

Vettel looked untroubled in the lead of the race until his gearbox, in its third race, failed to select fifth gear. It then failed completely and the RB9 rolled to a stop on the pit straight.

The Safety Car was summoned for a second time so the car could be removed safely. This was a major relief for Rosberg, who dived into the pits as the race was neutralised and got a ‘free’ pit stop onto fresh tyres.

But had Vettel intended to time his retirement to cause maximum inconvenience to his closest championship rival he couldn’t have done better. Alonso had just made his final pit visit, and the field compression behind the Safety Car saw him drop from third to eighth. The second Safety Car period dragged on while the rigmarole of letting backmarkers unlap themselves was performed.

That done, Rosberg resume in the lead chased by a trio of drivers who had not put fresh tyres on while the Safety Car was out: Raikkonen, Sutil and Ricciardo. Raikkonen queried the decision with his team on the radio but was told the opportunity had already been missed.

A well-timed second pit stop for Webber followed by a precautionary return visit under the Safety Car saw him occupy fifth. The two McLarens had stayed out and were sixth and seventh, followed by Alonso.

Having fallen to last place after his puncture, Hamilton had clawed his way back up to eighth with a 28-lap stint on hard tyres. He had changed his rubber just five laps before the Safety Car came out, so Mercedes elected not to bring him in again.

Over the final six-lap sprint those with fresher tyres swiftly dispensed with the cars in front of them. The tyre advantage alone was probably sufficient to tip the balance, and the two DRS zones served to ensure their rivals had no hope of defending.

Webber took Raikkonen, Sutil and Ricciardo on consecutive laps, so that with five laps to go he had Rosberg’s leading Mercedes in his sights, the pair separated by 1.3 seconds.

Alonso picked off Button at the restart. As they reached the Hangar straight he was lining up Perez for the same treatment when the McLaren driver suffered his second tyre failure of the weekend. It was a nasty shock for both drivers: Alonso swerved right to avoid the wounded McLaren and its tyre debris.

Hamilton arrived on Alonso’s tail and the pair easily overhauled Ricciardo, Sutil and Raikkonen. “We should have called Kimi in to save at least one position and make the podium,” admitted team principal Eric Boullier afterwards. “Unfortunately, we made the wrong call for which we apologise to Kimi and to the team.”

At the head of the field Rosberg and Webber traded fastest laps until the end. Webber set the best time on the final tour, but fell short of his rival by seven tenths of a second at the chequered flag.

Rosberg’s victory and the performance of Hamilton’s car would probably have attracted greater comment had it not been for the series of tyre failures. The team which finished 68 seconds behind the leaders in Spain, then conducted a controversial clandestine test for Pirelli at the track, were in much better shape on F1’s return to a ‘high aero’ venue.

Rosberg denied the team gained anything from the three days of running that contributed to his second victory of the year. His win was (which confirmed after an investigation by the stewards for speeding under yellow flags) and Hamilton’s fourth place moved the team ahead of Ferrari in the constructors’ championship. Despite spending 11 laps in last place at one point, Massa climbed to sixth at the finish after also pitting under the second Safety Car. But he believed his puncture had cost him a shot at the podium after a blistering start propelled him from eleventh to fifth on lap one.

Having been sent to the back of the grid after qualifying, Paul di Resta tangled with Nico Hulkenberg early in the race and had to pit to change his front wing. He recovered to finish ninth with Hulkenberg behind him.

The two Sauber drivers also experienced tyre problems: Hulkenberg had a slow puncture and Gutierrez had a left-front tyre failure which resulted in front wing damage. He slipped to 14th behind the two Williams drivers and Button. The McLaren driver lost tyre temperature after the final Safety Car period and was passed by six drivers in as many laps.

The Caterhams and Marussias were the last cars running. Grosjean picked up front wing damage – “we don?óÔéĽÔäót know if it was caused by some debris or something to do with the fact that it was a new part” – and retired in the pits.

The late appearance of the Safety Car meant a race that had been marred by a string of embarrassing and potentially dangerous tyre failures ended on something of a high. But the images of multiple drivers suffering tyre explosions will be of grave concern to those in the sport – above all Pirelli.

After the race Webber was not alone in expressing scepticism that anything will be done about the problem. “I think we?óÔéĽÔäóve been trying to have input for the last three years and it?óÔéĽÔäós deaf ears.”

“Anyway, we?óÔéĽÔäóre part of the package, part of the show. The show goes on by the looks of it.” Webber, who announced this weekend he will leave F1 at the end of the year, added: “It?óÔéĽÔäós not December yet, so I?óÔéĽÔäóll stay quiet.”

With the German Grand Prix coming up this weekend there is little time for those in charge to get to the bottom of what’s gone wrong. Formula One took a huge gamble at Silverstone and got away with it. Next time it might not be so fortunate.

To avoid further embarrassment and risk the teams, the governing body and Pirelli will need to work together and act swiftly. But these are two things they have demonstrated little capacity for in the preceding months of bickering and politicking over F1’s tyres.