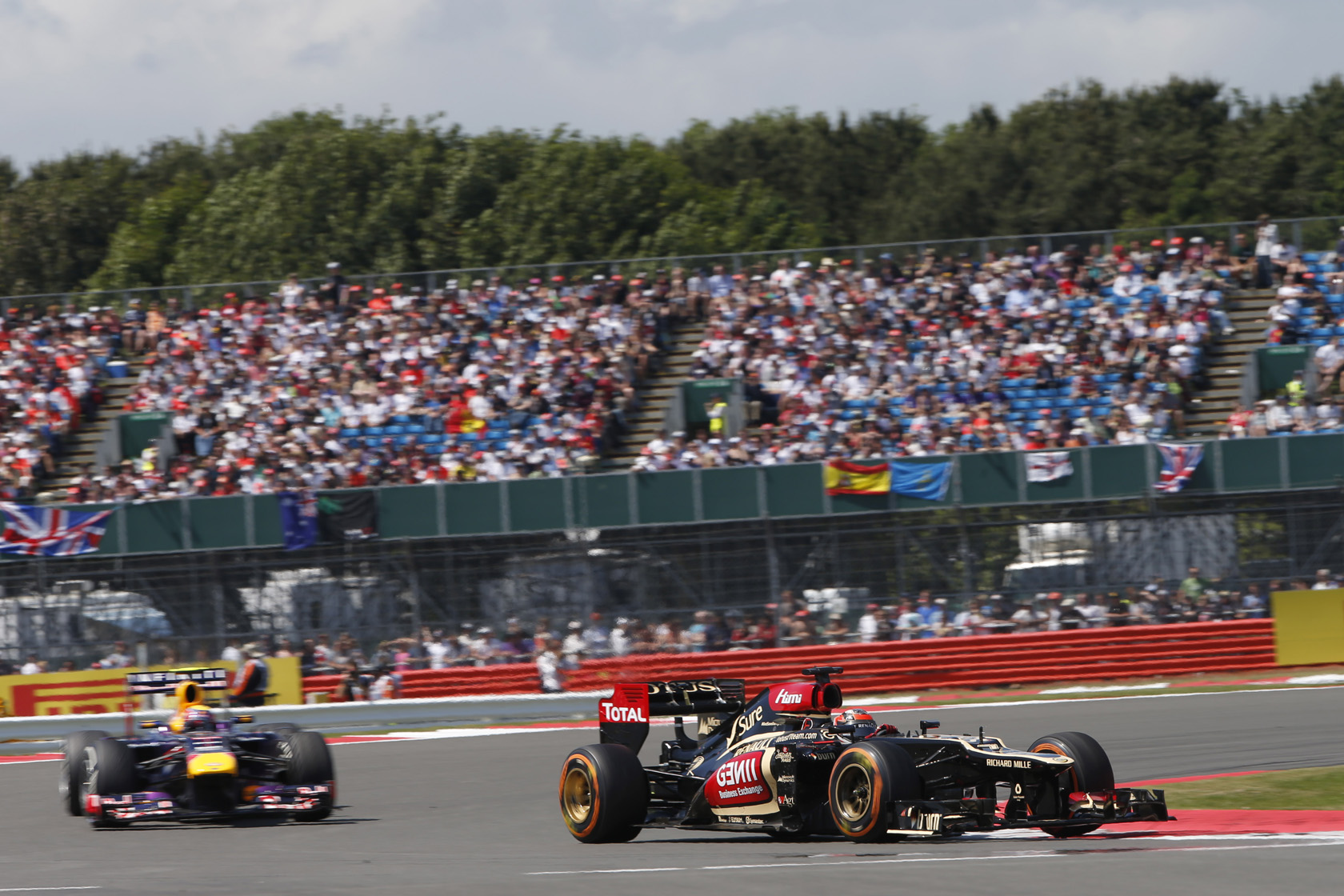 Kimi Raikkonen finished in the points for the 25th consecutive race in the British Grand Prix, breaking Michael Schumacher’s record.

Raikkonen has finished in the top ten in every race since last year’s Bahrain Grand Prix.

Schumacher finished in the points for 24 races in a row from the 2001 Hungarian to the 2003 Malaysian Grand Prix. But as noted last week points were not offered down to tenth place when Schumacher set the old record.

Unsurprisingly, Raikkonen did not seem at all interested in the record when it was pointed out to him.

The ten longest points-scoring streaks in F1 are now as follows:

As noted above, Vettel’s run of 14 consecutive points finishes came to an end in yesterday’s race when his gearbox failed.

It also means no driver has completed every racing lap. Raikkonen and Hamilton have the most with 492 out of a possible 493 (Raikkonen was lapped in Canada, Hamilton in Spain). Nico Rosberg claimed the third win of his F1 career at Silverstone. He now has as many wins to his name as Mike Hawthorn, Peter Collins, Phil Hill, Didier Pironi, Thierry Boutsen, Heinz-Harald Frentzen, Johnny Herbert and Giancarlo Fisichella.

He needs two more wins to match his father’s tally. Keke Rosberg never scored a victory the British Grand Prix but he did the non-championship 1978 BRDC International Trophy race at the track in a Theodore, leading home Emerson Fittipaldi in his own team’s car and Tony Trimmer in a Melchester-run McLaren.

Lewis Hamilton claimed the 28th pole position of his career. It was his second pole position at Silverstone following the one he took in his rookie season six years ago.

Hamilton has the best average position in qualifying (before penalties) so far this year on 2.38. Vettel is next on 2.88, then Rosberg on 3.13.

It was Mercedes’ 14th pole position giving them as many as Tyrrell. The two teams are connected as Tyrrell’s F1 entry was purchased by British American Racing, which later became Mercedes by way of Honda and Brawn.

Hamilton set a new record on the current configuration of Silverstone with his pole position lap. He stopped the clock at 1’29.607, eight-thousandths of a second quicker than Vettel’s 2010 pole position time.

However the fastest lap of the race, set by Webber on the final lap, was 2.6 seconds slower than the lap record of 1’30.874, set by Alonso three years ago. It is the second race in a row Webber has set the fastest lap, the 16th of his career.

We now know Webber has just 11 races left to run in his F1 career. Daniel Ricciardo, one of the drivers who’s been tipped to replace him, chose the right time to achieve his best qualifying result to date with fifth following Paul di Resta’s exclusion.

Romain Grosjean out-qualified Raikkonen for the first time this year, leaving Vettel and Hulkenberg the only drivers to have beaten their team mates in all eight qualifying sessions so far. Jules Bianchi has beaten Max Chilton seven times but was unable to set a time in Monaco. Williams celebrated their 600th race start, which they will officially reach at the next race in Germany. Disappointingly for them although they scored their best result of the year (Pastor Maldonado 11th, Valtteri Bottas 12th), they still haven’t scored any points so far this year.

Pirelli were probably not celebrating the 250th F1 race in which they have supplied tyres to at least one team. Their tyres won the first world championship race on Giuseppe Farina’s Alfa Romeo.

After leaving the sport Pirelli made a brief and largely unsuccessful comeback in the eighties and nineties, winning three races. They have been F1’s official and sole tyre supplier since 2011.

Hamilton became the fifth driver in F1 history to exceed 1,000 points. However as noted earlier this year it’s a rather meaningless milestone.

Finally, the British Grand Prix was the first race after Mercedes were charged with conducting an illegal test for Pirelli. A central point in the row is whether Mercedes gained an advantage from the test.

Spotted any other interesting stats and facts from the British Grand Prix? Share them in the comments.