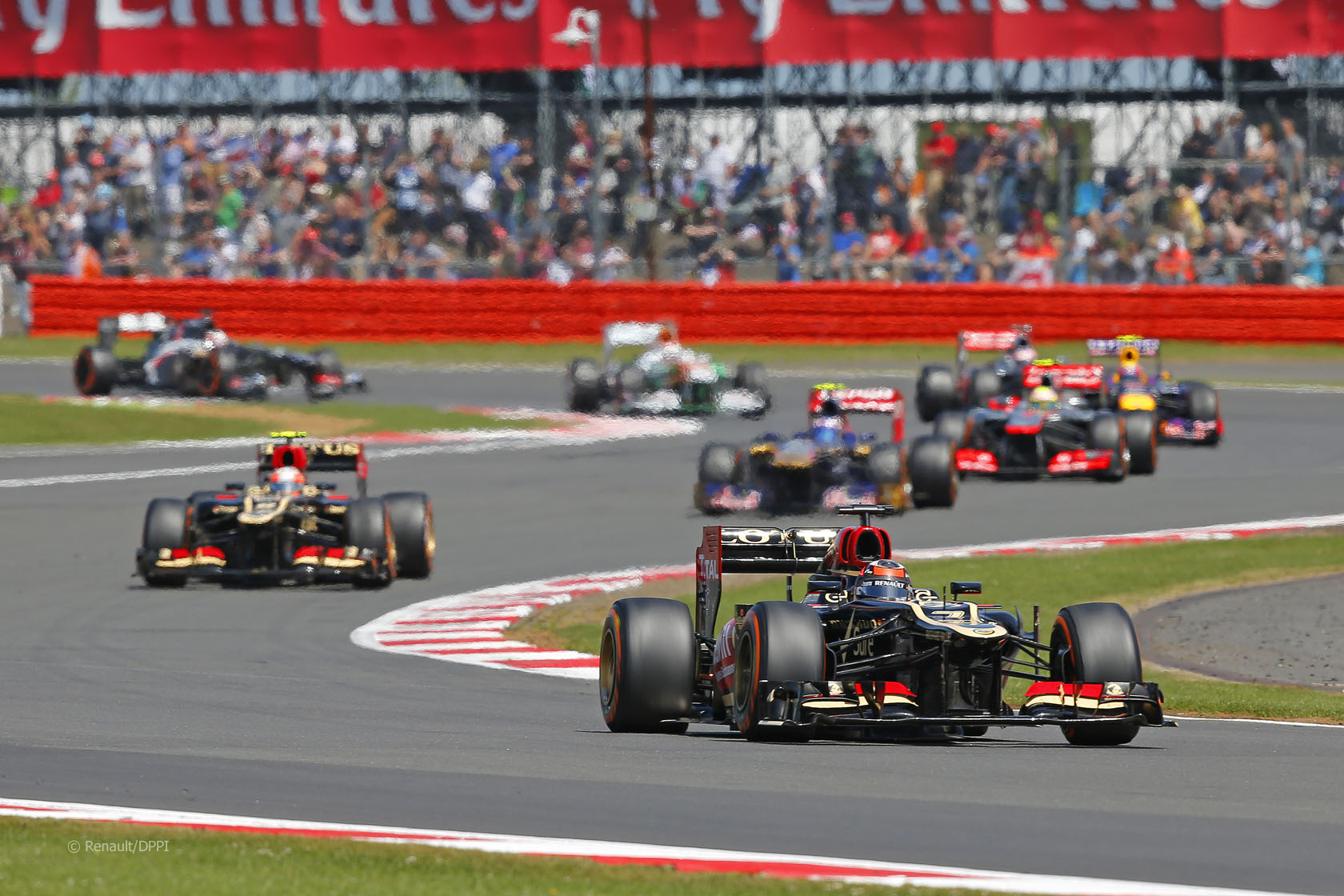 But it went on and a Safety Car interruption towards the end of the race turned a 90 minute F1 showcase into a ten-lap touring car-style sprint to the flag.

That allowed the unfortunate Lewis Hamilton and Felipe Massa – two of the drivers who suffered punctures – to put on great displays to score well-deserved points.

Tyres have been a constant talking point in 2013 and the effect they had on the Silverstone race. But there was enough racing action up and down the field to keep many viewers entertained.

F1 Fanatic readers rated the race at 7.39 out of 10, ranking it fourth of the eight races up to that point in 2013. But opinions were strongly divided over the tyre problems and safety implications.

It wasn’t enjoyable watching while fearing for the drivers?ů‘ťľ‘šů safety. Whatever the reason, it?ů‘ťľ‘šůs simply not acceptable to have four high speed tyre failures in one races. Questions have to be asked and solutions have to be found.

However… it was a very good race. Fantastic recoveries from Hamilton and Webber, a good win from Rosberg, canny drive from Alonso and unlucky for Raikkonen. In fact, the driving was genuinely excellent and the last few laps were thrilling.

An eight. Would have been a nine without the tyre farce.
@Lin1876

If you?ů‘ťľ‘šůre a neutral, it had almost everything – even some unwanted bits with the tyres. Last ten laps were gripping.
@91jb12

A fantastic, dramatic race that was due to, and also almost paradoxically marred by the dangerous tyre issues throughout the Grand Prix.

It was enthralling to watch but I can say honestly I hope such a race is never repeated, there are only so many catastrophic tyre failures that F1 can have before someone is injured or worse.
@Colossal-Squid

The race itself was actually quite good, lots of overtaking and a great finish.

But there can be no argument that Pirelli turned the British Grand Prix and F1 as a whole into a complete farce today. They have created tyres that are unable to cope with the loading of one of the finest race tracks on the calendar; they are not fit for purpose.
@bleeps_and_tweaks

But not from everyone – this reader may just get a Christmas card from Paul Hembery:

I gave it a ten, for one main reason: unpredictability.

Imagine if you will, that the tyres were indestructible and everyone was able to make it on one stop. Everyone would have strung out throughout the race and the only thing of any interest would have been Vettel?ů‘ťľ‘šůs gearbox going out.

But with the drivers puncturing their tyres on the kerbs, there was no point in the race where any position was safe.

It was a throwback to the races of the eighties and nineties when cars weren?ů‘ťľ‘šůt nearly as reliable as now and any car had the potential to break at any time.

Most of the field managed to not damage their tyres, so I wouldn?ů‘ťľ‘šůt be so quick to blame Pirelli here. We all know the teams are already going to the edge on their own, and this time some of them went too far over the edge.
@guelph

With the focus on tyres, rather less was said about DRS, though there were mixed views on how well the addition of a second zone worked:

The racing wasn?ů‘ťľ‘šůt actually bad, the last few laps were great. The second DRS zone was too much. I said last year that the DRS on Wellington straight was almost perfect, there was no need to put another zone.

I don?ů‘ťľ‘šůt think we can overlook the problem with the tyres. Five punctures are not acceptable. It?ů‘ťľ‘šůs embarrassing for the sport. Terrible, terrible day for Formula One.
@yobo01

One viewer thought Michael Bay has a new rival in Bernie Ecclestone:

?ů‘ťľ‘«ō My opinion: The ending was ok, but in great parts it reminded me of ?ů‘ťľ?ŰMan of Steel?ů‘ťľ?ō, with all the stuff blowing up. At least CGI explosions looked decent. I gave it a six on IMDb.
@Malaclypse

But if the 2013 British Grand Prix was a film, this reader have it a poor review:

I?ů‘ťľ‘šůve never had more mixed feeling about a grand prix.

First of all, we?ů‘ťľ‘šůve had an amazing finish and probably the best last seven laps this season, I can agree with that.

However, it was all due to a timely safety car and it can be strongly related to some people nailing the strategy for the last stop (Alonso, Webber) and others making a mess out of it (Raikkonen). Yes, Rosberg, Webber and Alonso deserve all the credit for driving their hearts out and so do Massa and Hamilton, but let?ů‘ťľ‘šůs face it, it was still somewhat artificial. It wasn?ů‘ťľ‘šůt sheer racing that brought us this ending, it was a just a decent finale determined by an altogether chaotic race. […]

I can?ů‘ťľ‘šůt find many positives in this joke of a race in which we had no indication whatsoever about anyone?ů‘ťľ‘šůs real pace (again, but for all the different reasons), in which the tyres ruined way too many potential outcomes and which was downright dangerous even by touring car or NASCAR standards.

This wasn?ů‘ťľ‘šůt a brilliant movie altogether. It was a mediocre comedy, but with the ending we all wanted to see. Just like five decent minutes out of a two-hour long movie don?ů‘ťľ‘šůt make it a good one, seven laps out of fifty-two don?ů‘ťľ‘šůt make this a good race.
@Tony031r

Finally, one person had an idea which would create a lot more work for me!

I think there should be a ?ů‘ťľ?£rate the lap?ů‘ťľ‘šů feature so we can rate each lap individually as we watch the race.
@jonathan189

20 comments on “Good rating for British GP despite tyre chaos”