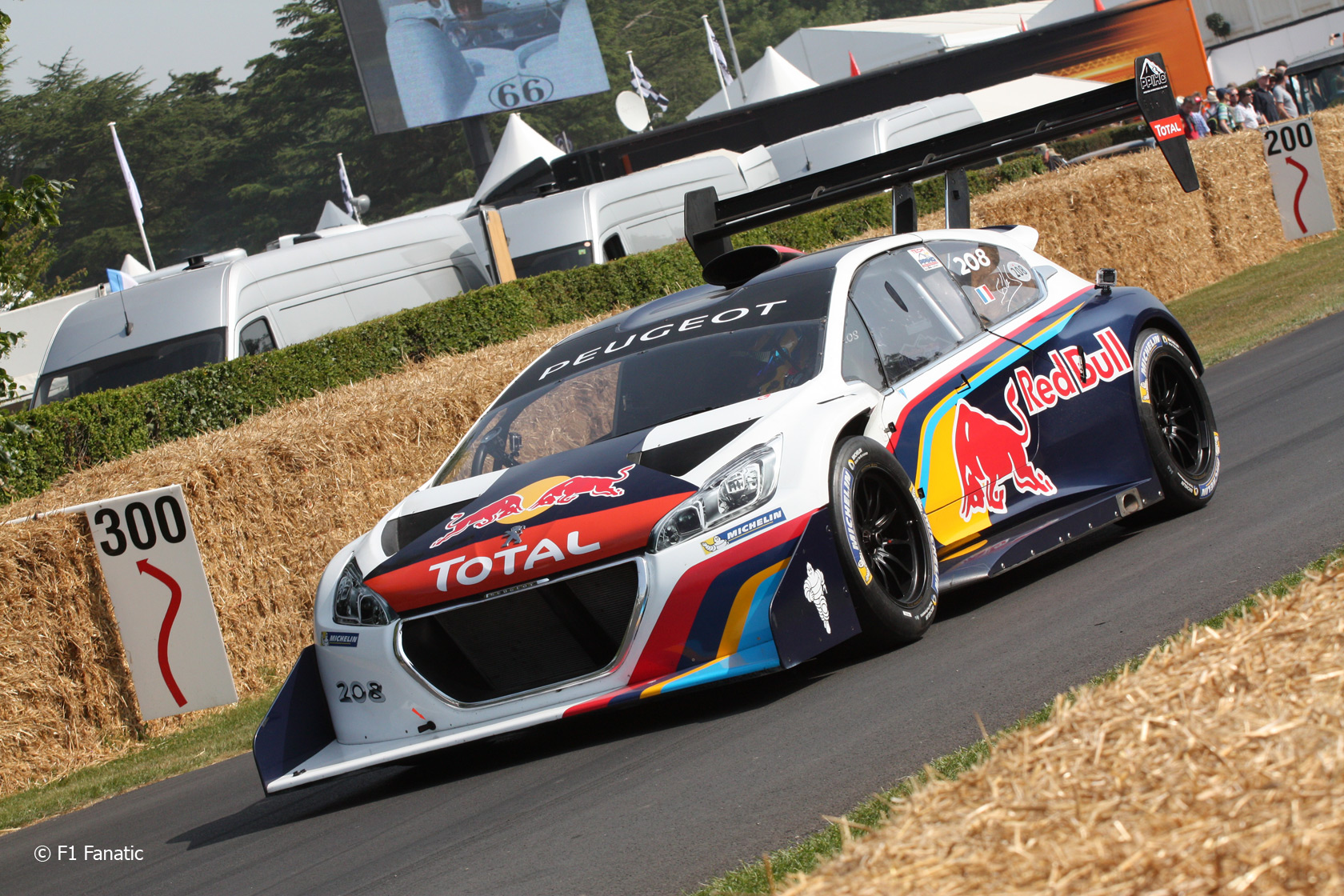 Here’s a personal selection of my favourite cars and pictures from the 2013 Goodwood Festival of Speed. Peugeot’s monstrous 208 silhouette car destroyed the record time for the Pikes Peak hillclimb in Sebastien Loeb’s hands. On the considerably less challenging incline at Goodwood it was still a spectacular machine to behold. Its predecessor was also on the hill: Debatable looks but a glorious noise from the flat-12 engine in Ferrari’s unraced ‘snowplough’. Another unusual Ferrari – this one was built for the Indianapolis oval. Lotus tried a gas turbine car in F1 without success. But it was well-suited to the demands of Indianapolis. Damon Hill drove the car on Sunday – note the heat haze from the turbine behind his helmet. Stirling Moss won the 1955 Mille Miglia with the 300 SLR and requested designer Rudolf Uhlenhaut create a coupe version for future races. It was built but in the wake of the disaster at Le Mans that year, never raced. Two of the more outlandish Can-Am creations. The Chaparral boasted both a semi-automatic gearbox and driver-adjustable aerodynamics. The aggressively low AVS was designed to reduce frontal area to a minimum, but it wasn’t a success. Porsche celebrated 50 years of the 911 at Goodwood’s centrepiece. The number two Audi R18 etron quattro of Tom Kristensen, Allan McNish and Loic Duval appeared fresh from their latest success at the Le Mans 24 Hours and still covered in grime from the race. Toyota brought their TS010 which competed in the Sports Car World Championship in 1992 before the series collapsed. A world series for long-distance prototype racing was recreated last year with the World Endurance Championship in which Toyota compete with their TS030: Goodwood’s soapbox racers competition ran from 2000 to 2004 before being scrapped as some of the chassis were exceeding 70mph as they hurtled downhill and the potential for driver injury grew too great. They returned this year but were under instruction to take things easy on the way down. The most recent version of Ford’s Supervan is based on a Group C sportscar chassis. A Cosworth V6 engine nestles beneath the Transit shell. Dubbed the ‘Golden Submarine’, this striking 1917 car has a three-litre, four-cylinder engine and needed a push from three marshals to get started even when heading downhill. The Lancia Stratos is one of the great iconic rallying cars and enjoyed great success in the seventies. 19 comments on “Favourite cars and highlights from Goodwood”