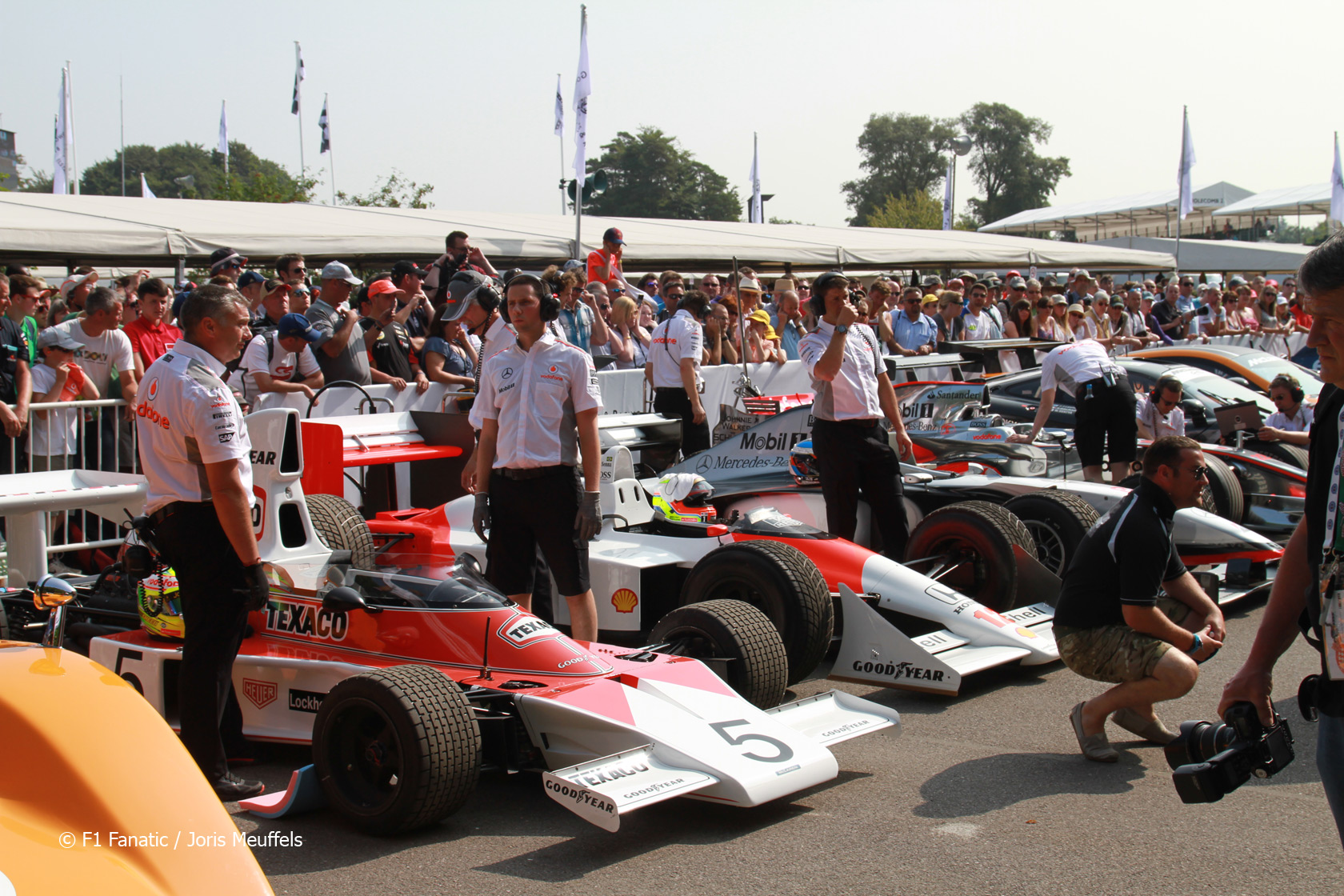 It is 50 years since Bruce McLaren founded his racing team. McLaren enjoyed success in Can-Am, IndyCar, Le Mans – an above all Formula One.

The team brought a collection of their cars to the Goodwood Festival of Speed including some of their most successful machines. Bruce McLaren achieved the rare great of winning a Grand Prix in a car bearing his own name at Spa-Francorchamps in 1968, at the wheel of a Cosworth-powered M7A. McLaren dominated the spectacular Can-Am series with the M8D. But tragically the team’s founder was killed while testing one of the cars at Goodwood in 1970. With the M23 McLaren enjoyed sustained success in the mid-seventies. Emerson Fittipaldi defected from Lotus to drive the car in its second year of service and delivered the title. Following his departure at the end of 1975, James Hunt took it to another title after an epic duel with Niki Lauda. That chapter in the M23’s history is told in the forthcoming film Rush. McLaren scored two triumphs at the Indianapolis 500 with the turbo-powered M16. Johnny Rutherford’s 1974 win was scored with a factory-run car, unlike Mark Donohue’s 1972 victory for Penske. McLaren enjoyed a successful run with Porsche power in the eighties. But its F1 apogee came in 1988 with the devastating Honda-powered MP4-4. Ayrton Senna and Alain Prost laid waste to the opposition, winning all bar one of that year’s 16 races. After Honda’s 1992 departure McLaren spent a year using Cosworth engines, then tried and rejected a switch to Lamborghini power. Peugeot came on board for 1994 bit the partnership was not a success: McLaren endured their first winless season since 1980. The following year Peugeot were replaced by Mercedes. While their F1 team endured a fallow spell McLaren scored their first win in another classic race: the Le Mans 24 Hours, ironically using a race version of their iconic ‘F1’ road car. JJ Lehto, Yannick Dal and Masanori Sekiya were the drivers. A rewrite of the F1 aerodynamic regulations and the hiring of Adrian Newey from Williams put McLaren back on the path to championship success. This is their most recent car to win the constructors’ championship. The latest racing derivative of a McLaren road car compete in GT racing. The P1 is McLaren’s successor to the iconic F1, and will be one of the top performing road cards in the world when it goes on sale. It goes up against Ferrari’s latest top-of-the-line model – the LaFerrari.