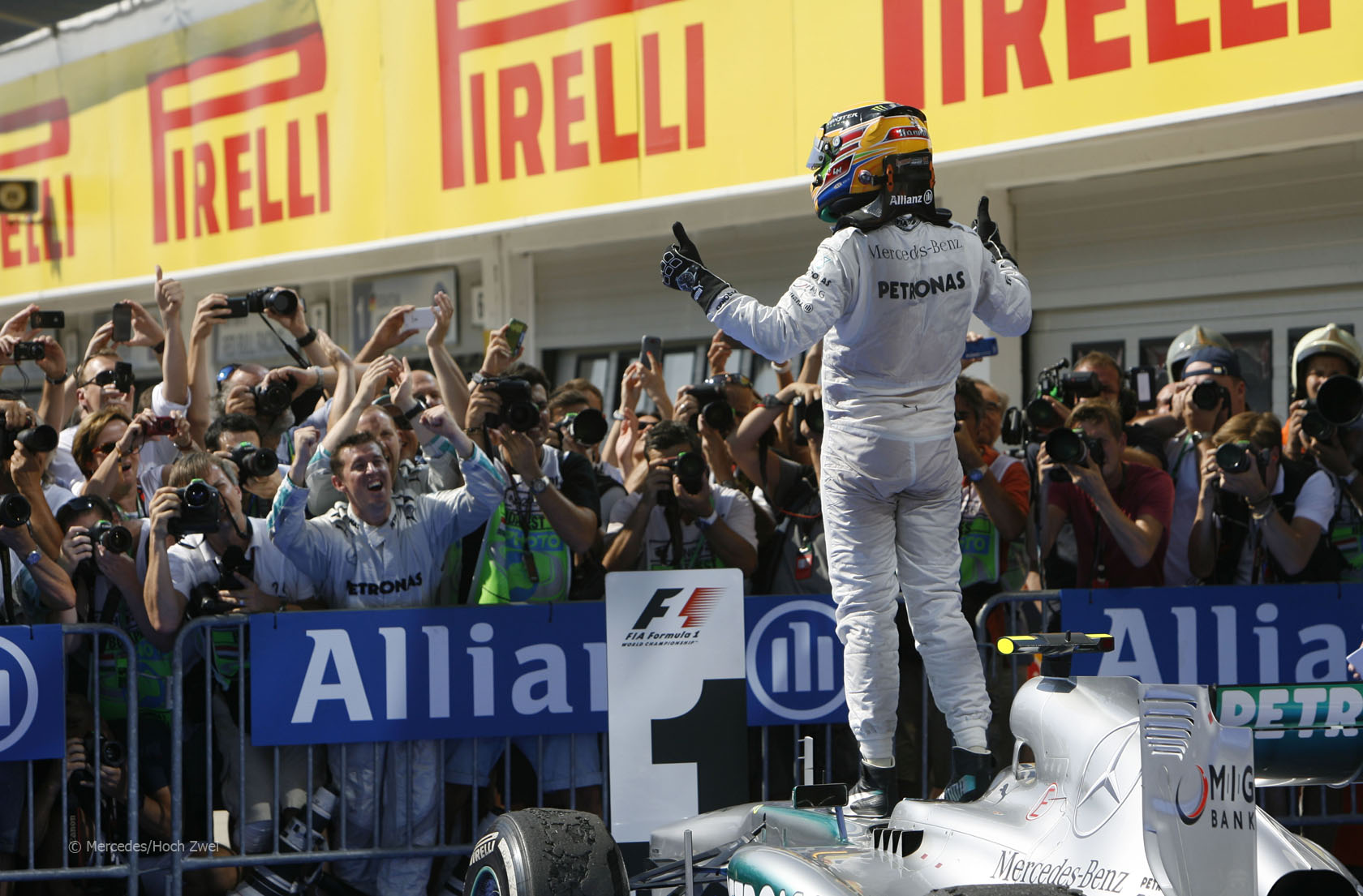 It’s ten months to the day since Lewis Hamilton announced he would be driving for Mercedes in 2013.

When the news broke Hamilton had already won three races for McLaren in 2012. And after the announcement Mercedes went for five consecutive races without scoring a single point.

As the new season dawned there can’t have been many people who thought Hamilton would win his first race for Mercedes before either McLaren driver stood on the podium.

But in the tenth race for their new partnership Hamilton produced a battling drive of the highest order to win the Hungarian Grand Prix.

Hamilton leads as Rosberg loses out

As in Germany the front row was shared by Hamilton and Vettel. The Mercedes driver pipped the Red Bull by the slender margin of 38 thousandths of a second.

But with track temperatures soaring to 50C as per the forecast, Hamilton was pessimistic about his chances of victory ahead of the race. The Mercedes has struggled to make its tyres last this year, and although Nico Rosberg had run a reasonable 18-lap stint on Friday doubts persisted over their race form.

When the red lights went out Hamilton motored away smoothly from the clean side of the grid while Vettel, struggling for purchase on the dusty side, squeezed third-placed Romain Grosjean hard to stay ahead.

Vettel prevailed, leaving Grosjean to dish out similarly firm treatment to Fernando Alonso, who had beaten Rosberg off the line. Alonso later objected to Grosjean’s driving but the Lotus driver hadn’t broken any rules – yet.

As the field accelerated out of turn four Rosberg tried to take advantage of Massa on the outside of turn five. He would probably have made the move stick had he not turned in a fraction too tightly, provoking contact between the two which sent him off the track, slipping down to 12th place. Vettel immediately unleashed the RB9’s potential, slashing Hamilton’s lap one lead to 0.56s at the end of lap two.

That gave him the opportunity to use DRS to attack. But it proved insufficient to overcome Hamilton’s straight-line speed advantage of more than 10kph. Within three laps the Mercedes was back out of range from Vettel’s DRS.

Hamilton continued to edge clear, pulling out a 1.8 second lead by lap seven. Vettel had Grosjean breathing down his neck, the Lotus driver close enough to use his DRS but not to make a move.

Two laps later Hamilton’s sector times began to rise and Mercedes wasted no time getting him into the pits. He emerged behind Jenson Button but the first time they came down the pit straight together Hamilton sped past using DRS, passing easily on the inside.

Vettel’s tyres lasted two laps longer than Hamilton’s before they began to wilt. Far from losing time behind Button, Hamilton was able to lap within two tenths of his best up to that point. More importantly, he was eight-tenths of a second quicker than the last lap of Vettel’s first stint. That more than cancelled out the half-second Vettel gained courtesy of the race’s fastest pit stop on lap 11. Like Hamilton, Vettel emerged from the pits behind Button. But that straight-line speed deficit told again – it took Vettel until the end of the second DRS zone to get within touching distance of a move on Button. And when he tried one he succeeded only in losing part of his front wing against Button’s left-rear.

Making matters worse for Vettel, his engine temperatures were rising in Button’s wake, and race engineer Guillaume Rocquelin was soon on the radio urging him to drop back. Vettel complied for five laps, Grosjean stalking him all the while, before drawing the McLaren in again.

By now Button’s medium tyres were 23 laps old, and when Vettel launched an attack on him at the unlikely overtaking spot of turn four it opened the floodgates. Grosjean took the McLaren at the chicane – carelessly banging wheels with Button as he did – and Alonso picked off the McLaren at the exit of the corner.

But for Vettel the damage had already been done. Having trailed Hamilton by 1.7 seconds at the end of the first stint, he was now over 13 seconds adrift.

Like Button, Mark Webber had also started on the medium tyres and ran on them until lap 23. That put the Red Bull driver in the lead for nine laps. After his first pit stop he fell back to fifth, but that was still five places higher than he’d started.

Following his brush with Button, Grosjean came in for an early second stop on lap 25. The stewards were already deliberating the contact between the pair, but they were about to have another incident to investigate.

Grosjean left the pits behind Felipe Massa and rapidly closed on the Ferrari. Wasting no time, he launched an ambitious move around the outside of turn four – and pulled it off.

Or so he thought. Within a few laps the stewards concluded he had completed the move with all four wheels off the track – albeit by a tiny margin. He was handed a drive-through penalty which ended his chances of finishing on the podium. Having freed himself of Button, Vettel chipped into Hamilton’s lead over the rest of the second stint. The gap was just under 12 seconds when Hamilton made his second pit stop on lap 31.

But when the Red Bull driver did likewise three laps later he was dismayed to see Button’s McLaren get to turn one before him again. Fortunately for Vettel, Button was running a short middle stint on soft tyres and was soon out of his way. Though not before Vettel lost all of the meagre gains he’d made on Hamilton and then some.

As his chances of getting back on terms with Hamilton diminished, Vettel’s greater concern was now the advancing Lotus of Raikkonen. Having fallen behind Massa at the start Raikkonen had made his first pit stop on the same lap as his team mate – the Lotus crew slickly turning around both cars within moments of each other.

Raikkonen stretched his second stint out to 29 laps, making a two-stop strategy viable. It kept him in clear air and within range of the delayed Vettel.

When the Red Bull driver pitted for the final time on lap 55, it left him with 15 laps to hunt down the Lotus. It took just three laps for him to get within DRS range, but even that plus the Lotus’s 13-lap older tyres were barely enough to overcome his straight-line speed deficit.

Vettel was also managing a car problem, Rocquelin telling him to enter fail codes on his steering wheel (as team mate Webber was also doing). As he had done while chasing Button earlier, Vettel dropped back briefly then went on the attack again.

His best chance to take the Lotus came on the outside of turn four with two laps to go. But he got onto the dirt, ran wide and had to settle for third place. Meanwhile Hamilton was making wheel-to-wheel combat look easy. He emerged from his final pit stop just in time to see Webber go by. But he dived up the inside of the Red Bull at turn three, forcing Webber wide, and seized the position.

That was the last obstacle between Hamilton and victory, although Mercedes got a fright when Rosberg’s car expired with engine failure six laps from home. They weren’t sure of the cause of the problem – it didn’t seem to be related to the heat – so they didn’t know if Hamilton’s car would last.

Hamilton had been disbelieving when he’d taken pole position the day before, but his reaction to winning his first race for Mercedes was one of pure delight – and not a little vindication.

In a reverse of the finish in Germany it was Raikkonen who held Vettel off to the flag. The Lotus driver then came to a stop immediately after crossing the finish line – he had been advised to save fuel earlier in the race.

Webber finished five-and-a-half seconds behind his team mate after starting eight spots back, while Alonso resisted Grosjean back for fifth. A 20-second time penalty for colliding with Button made no difference to Grosjean’s finishing position, and Alonso avoided punishment for using DRS three times when he wasn’t supposed to. Massa, eighth, was sandwiched by the two McLaren drivers. Behind them Williams’ long wait for a point finally came to an end as Pastor Maldonado inherited tenth thanks to Rosberg’s late retirement. His team mate had dropped out shortly after half-distance with a hydraulic problems.

A drive-through penalty for speeding in the pits left Hulkenberg 11th followed by the two Toro Rossos. Jean-Eric Vergne finished ahead of Daniel Ricciardo, the latter losing several positions due to a slow first pit stop. Both Force Indias retired with hydraulic problems.

A dramatic swing in performance at the rear of the field saw Marussia, who had been on a par with Caterham until now, finish a lap behind their closest rivals. “We were struggling with the balance the whole time and having to work so hard to preserve the rear tyres,” said Jules Bianchi.

Hamilton emerges as a contender

Marussia’s plight was one manifestation of how the change in tyres this weekend has affected the championship. That Mercedes and Red Bull have found the new tyres more to their liking is consistent with what we’ve seen so far this year.

The question now is whether Hamilton’s victory is the beginning of a more sustained championship challenge from him. The next two races are on ‘power tracks’ which should suit the Mercedes, and it’s telling that Ross Brawn said any decision on their priorities will be taken after those two races.

Vettel can leave Hungary content that he increased his points advantage over his nearest championship rival. But he may be increasingly concerned about the threat posed by the driver who’s in fourth place, 48 points behind, who’s just rediscovered his winning form with a new team.