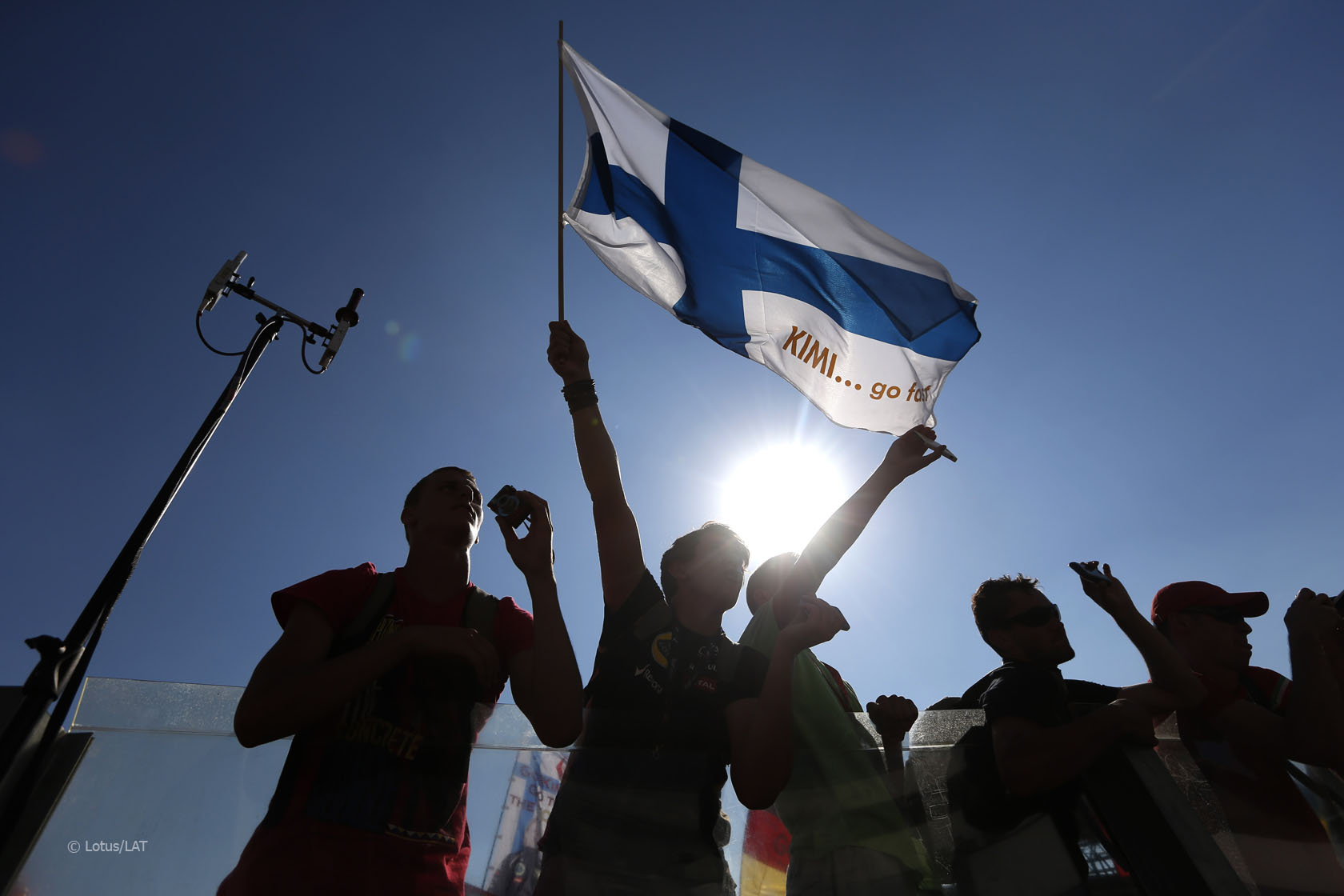 The Hungarian Grand Prix is dead boring, right? The Hungaroring is an overtaking-free zone and the locals are more interested in Norbert Michelisz’s touring car exploits than F1.

Madi Murphy (@LadyM) disagrees – she went to the Hungarian Grand Prix for the third time this year and says the combination of a great city and fantastic atmosphere at the track is not to be missed.

I love the Hungarian Grand Prix. Unlike many F1 fans, I’ve never found it to be a particularly dull race to watch on TV, and I’ve now had the privilege of attending three times. I can’t recommend it highly enough.

My three Hungaroring experiences have differed greatly. I first went in 2009, and had a brilliant weekend, but it was somewhat overshadowed by Massa’s accident. I will never forget the sickening feeling of sitting in a near-silent grandstand watching the medical helicopter take off, unsure of exactly what had happened and whether Felipe would live or die.

My next trip to Hungary, for the 2012 race, lacked drama of any kind. It was the only F1 race I’ve ever been to where I actually found myself thinking, ‘I bet this is really boring on TV’. Still, we came back for more. I think my friends and I will probably continue to attend the Hungarian GP for as long as it remains on the calendar – but I’m not sure we’ll ever have as amazing a time as we did this year.

In the GP3 paddock

One of my companions has a friend who works in GP3, and as a result we were lucky enough to get passes for the support-race paddock for the entire weekend. It was such a privilege, affording us a fantastic opportunity to get up close to the cars while the mechanics were working on them. We were also able to meet several drivers from the feeder series, along with commentator Will Buxton, which was brilliant as we’re huge fans of both GP2 and GP3.

An added bonus that we hadn’t anticipated needing was that the hospitality tents had an air-cooling system, and large fridges filled with complimentary bottles of water. Given the scorching temperatures over the weekend, having access to a relatively cool place to sit made a huge difference to our experience. But more importantly, being in the support paddock allowed us to witness the preparation of cars and drivers before they went out on track. It was a rare chance to see the sport up close and we loved every minute of it.

Excited as we were to be in the paddock, we wanted to watch as much on-track action as possible from our grandstand seats. But it soon became clear we were better off taking advantage of GP3′s hospitality for as long as we could. The suffocating heat was one thing – we retreated to the paddock during second practice as we were too hot and dehydrated to concentrate on the proceedings. Moreover, it was much harder to follow what was going on when we were watching it on track. This I discovered when I went to the Spanish Grand Prix earlier this year.

Now that FanVision is gone we spectators have to rely on track side commentary, which has obvious limitations. At the Hungaroring it was even worse than in Spain, as there was no radio frequency on which to listen to commentary (at least, if there was, we couldn’t find it) and the limited amount you can hear over the public address system is split between Hungarian, German and English, so it’s of limited use.

For this reason, we elected to watch the GP2 and GP3 qualifying sessions in the hospitality tent, where we at least had the benefit of live timing so could follow the action. When it came to F1 qualifying, though, nothing was going to keep us from the fantastic view offered by our seats in the Red Bull grandstand at the back end of the main straight. We were opposite a large screen so we could keep an eye on the lap times. Unfortunately only positions one to sixteen were shown, making it useless for Q1.

I spent the last few minutes of the session going through the list and trying to work out which two drivers (other than the Caterhams and Marussias) were in the drop zone. It was both frustrating and laughable – it’s quite strange that apparently no one in F1 thinks (or cares) about little things like this that would make the experience so much better for the fans at the track.

After qualifying we were treated to one of the most exciting GP2 races I’ve seen. It was fantastic that so many fans stuck around to watch it – in previous years at the Hungaroring (and also at the Circuit de Catalunya this year) I’ve been saddened by how quickly the crowds disappeared once the F1 sessions are over. But even the late afternoon GP3 race drew a fair crowd this time, possibly helped by the fact that so many fans at Hungary are Finnish, and their compatriot Aaro Vainio was on pole. The Finns in our stand certainly seemed to relish his victory!

As hot as Friday and Saturday had been, Sunday was forecast to be hotter still. We knew we wanted to be in our stand by 12.30 for the F1 drivers’ parade, and that we’d remain there (in direct sunlight) until after the podium ceremony. So we somewhat reluctantly decided to watch the remaining GP2 and GP3 races in the hospitality tent.

It was a shame to watch the races on a television screen rather than live, but it turned out to be a unique experience in its own right and one that we didn’t regret. Drivers from both categories came into the tent to watch each other’s race – I found myself sitting next to Mitch Evans during the GP3 race, and then my friend ended up next to Davide Valsecchi for the GP2 sprint race. We certainly never imagined that we might one day watch these races in the company of the reigning champions!

During both races, we left the tent with about five laps to go and went to stand by the fence overlooking turn two, so that we could see at least a bit of live on-track action and cheer the drivers during the final laps. Once the GP2 race had ended, we bade farewell to the paddock and headed to our grandstand for the main event. The F1 race was an exciting one, although I did find myself having some trouble concentrating due to the ridiculously high temperatures. I had to choose certain drivers to keep track of, and as a result there were a few things I didn’t really understand, such as how Ricciardo slipped so far back in the pack.

One thing I couldn’t help but notice was the massive gap from the Caterhams back to the Marussias, which developed almost immediately. It was a real shame, particularly considering how strong Marussia had looked earlier in the season; even compared with Barcelona I noticed a serious lack of pace. I hope they can develop the car after the summer break because it would be great to see a close fight between the two backmarker teams towards the end of the season.

About halfway through the race, we witnessed one of the most bizarre things I’ve ever seen at a grand prix. Valtteri Bottas’s Williams failed directly in front of our stand, and rolled a bit further down the grass beside the straight. After he’d got out, the marshals began pushing the car back up to a gap in the tyre wall. This itself is a little unnerving – I hate seeing marshals so close to the track while cars are racing (yellow flags were being waved but the cars still pass by at speed).

But what happened after the car was cleared away was just bizarre. During a brief gap in the traffic (given the shortness of the lap at this circuit, there wasn’t really a point when there was more than a ten-second gap between cars passing us), Bottas casually jogged across the track towards the pit lane. Before he’d even got to the barrier to vault over it, there were already cars on the bit of track he’d just been crossing; it was really alarming.

To make matters worse, he then strolled towards the pit lane as Nico Rosberg was entering the pits – I’m sure it wasn’t nearly as close as it looked, but from where we were sitting it appeared that Rosberg’s car came close to hitting him. It was scary to see. I have no idea whether drivers crossing the track on foot after retiring from a race is something that happens often, but it’s definitely something I’ve not seen before, and I really wasn’t comfortable with it at all. Overall the race was exciting and great fun to watch. As a Mark Webber fan, I was a bit sad that he wasn’t able to make it onto the podium because I’ll never see him race in F1 again. But I was pretty happy with the podium we got – and it was certainly popular with the majority of fans at the track.

One of the best things about the Hungaroring is the atmosphere – there’s always such a broad range of fans, with the usual suspects (Alonso/Hamilton/Vettel) receiving more support than most, but no one has as big a following as Kimi Raikkonen. The Finnish fans are great fun, and Raikkonen’s presence on the podium is guaranteed to be greeted with cheering, singing and dancing from almost the entire crowd.

There’s also a huge Polish contingent at Hungary every year, who even now bring giant Robert Kubica flags and banners. The whole weekend has such a party atmosphere, and I can’t see how anyone could fail to enjoy it (even if you’re dripping with sweat and sticking to your seat).

I would advise any F1 fan to go to the Hungarian Grand Prix. Apart from anything else, Budapest is such a stunning city, and its close proximity to the track means you can easily enjoy a superb holiday in the days surrounding the race weekend. This year, I couldn’t get a whole week off work, so I just went Thursday to Monday for the race, but even then I was able to enjoy four wonderful evenings in the city.

Accommodation is plentiful and caters to all budgets, and travelling to the track is fairly simple – a train journey and a walk will get you to the Hungaroring and back for about €15 (£13.11) for a three-day ticket – unless you want to splash out (relatively speaking) on cabs. At the track, the food and drink prices are reasonable, with ice creams, soft drinks and beers costing around €2 (£1.75) each. A real plus is that you’re allowed to take in as much food and drink as you want, so you can avoid the queues by bringing your own picnic. The facilities are pretty good, and this year there were even walk-through tents blowing a mist of cold water so that people could cool off – these proved to be life-savers.

Obviously, I had a lucky experience at this year’s Hungarian Grand Prix thanks to the support paddock passes, but having been before I knew this race is always a blast. It has the best atmosphere of any race I’ve been to, it’s right outside one of the best cities in the world, there are numerous great viewing areas and the tickets are great value.

I’ll certainly be going again next year, but having seen Lewis Hamilton take the chequered flag there all three times I’ve been, I’ll be crossing my fingers for a different winner next time. I’d really like to see how those Finns would party if their man made it to the top step!