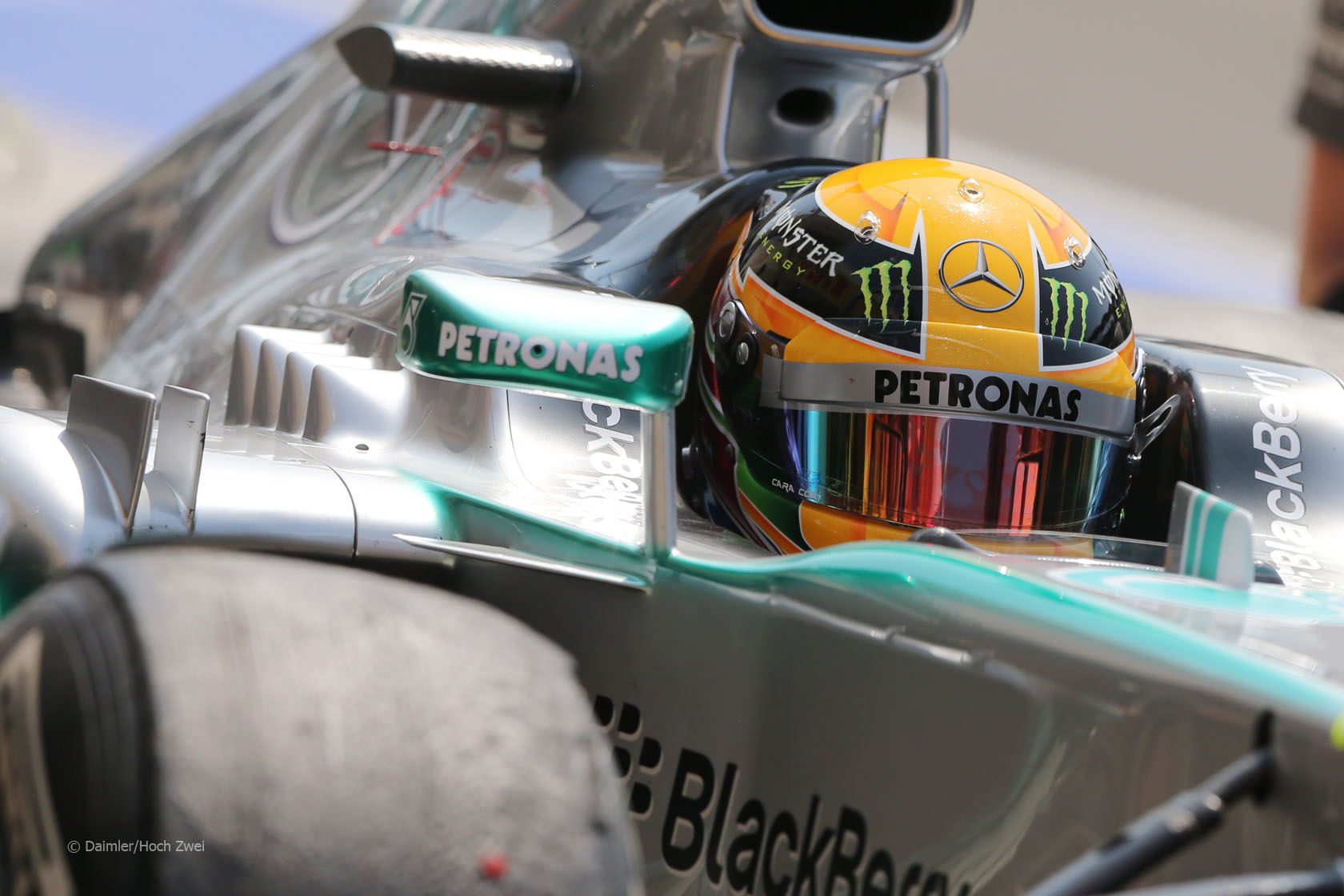 There’s no great mystery to how Red Bull have managed to rack up three consecutive constructors’ championships in a row, nor how Sebastian Vettel has used it as a springboard to a hat-trick of drivers’ championships.

Red Bull’s cars have consistently been the fastest over a single lap, meaning they have more often than not started from pole position. So while Adrian Newey’s downforce monsters tend to be on the draggy side, knocking a few kph off their top speed at most tracks, the precious advantage of starting first has helped them rack up win after win and title after title.

But the emergence of Mercedes as a force this year could be about to change that. They’ve been the team to beat in qualifying this year, and at the Hungarian Grand Prix they sent Red Bull a warning that they have little to fear from them on race day too.

Teams performance in the first ten races of 2013

This table compares the fastest lap time set by every team at each race weekend in 2013 (in any session) and shows how far each team was off the quickest lap time, as a percent:

It’s clear to see the W04 has usually been the quickest car over a single lap this year. Significantly on the two occasions where it wasn’t – in Australia and Canada – rain affected the final practice and qualifying sessions in which the fastest times of the weekend are usually set, skewing the data. It’s no stretch of the imagination to suggest Mercedes have had the quickest car over a single lap at every race this year.

They’ve duly converted that into pole position in seven of the ten races so far. However their win rate has been the opposite: just three out of ten.

The reason for that has often been that the Mercedes has overheated its tyres in the race and dropped back. At Monaco, where tyre wear is far lower, they locked out the front row of the grid, held their rivals up and won. At Silverstone tyres were exploding left, right and centre, then Vettel’s gearbox failed and victory fell into Nico Rosberg’s lap.

But Hungary might just have been a turning point. On a viciously hot day, when the W04 was expected to cook its Pirellis, Lewis Hamilton converted pole position into victory. It helped that Vettel spent the early part of the race in traffic, but in the second half the Mercedes was a match for the Red Bull on pace even when both were running in clear air.

What’s more, the Mercedes does not have the straight-line speed disadvantage of the Red Bull. Hamilton easily passed Jenson Button in the race while Vettel, giving away 10kph to the Mercedes on the straight, lost a dozen laps staring at Button’s rear wing.

This will surely have set alarm bells ringing in Milton Keynes. For the first time since early 2009 Red Bull have a rival who can consistently out-qualify and out-race them too. We could be in a fascinating second half of the championship as the silver cars chip away at their rivals’ advantage in the points standings. It’s not yet a two-horse race in the championship. Ferrari and Lotus have been able to outstrip Red Bull and Mercedes on race pace on occasions in the season so far.

Lotus had the edge in the last two races, putting the heat on Red Bull and Mercedes, but falling short of victory. But Ferrari are clearly growing frustrated at getting close, but not quite close enough, to consistent race-winning pace.

It looked like Ferrari had finally cracked it when Fernando Alonso won two of the opening five rounds. But since then they’ve slipped back and have not been shy about explaining the reasons why.

Last weekend president Luca di Montezemolo accused the FIA of letting Mercedes off the hook over their controversial test for Pirelli ahead of their breakthrough Monaco win, and reiterated past criticisms about Formula One’s rules being too focused on aerodynamics, an area where Red Bull have clearly excelled.

Another explanation for Ferrari’s continued struggles is their wind tunnel. The team have been using Toyota’s equipment in Cologne while their own tunnel in Maranello is worked on to resolve the correlation problems they’ve been experiencing.

One advantage Lotus and Ferrari do enjoy over their rivals is reliability. Red Bull have already lost one win to a technical failure this year and Rosberg’s Mercedes has let him down three times on Sunday. While the E21 and F138 have not been free from glitches, they’ve only had one race-ending failure between them.

The rest of the teams McLaren’s problems this season have been well-documented. Slow progress is being made and the MP4-28s are increasingly found among the lower reaches of the points-scorers in the midfield.

They appear to have been helped by Force India’s struggles with the Kevlar-belted tyres, first introduced in Germany then revised for the last race in Hungary. Paul di Resta, a consistent points-scorer earlier in the season, was eliminated in Q1 at the Hungaroring, perplexed by his inability to make the current tyres work.

Sauber, however, have made a clear step forward after a horrible start to the season. Their tyre performance looked much better in Hungary and only a drive-through penalty kept Nico Hulkenberg from a points finished. The beleaguered team look set for a more positive second half of the season.

At the back of the field Caterham and Marussia continue to show little sign of getting on terms with the midfield. The latter had a dreadful weekend in Hungary, struggling massively with the tyres. Having begun the year ahead of Caterham they were lapped by their rivals at the Hungaroring.

As we pass the mid-point in the season all the teams now have to grapple with the vital question of how much of their resources to divert to next year’s radical overhaul of the rules. For some, like struggling McLaren, the benefit of focusing early on next year is clear.

But Ross Brawn has said Mercedes will wait and see how they perform at the next two races – on high-speed tracks which should suit their car – before making that call. By then the championship situation could look every different.

Are Mercedes the greatest threat to Red Bull in the second half of the season? What do you expect Lotus and Ferrari to achieve? Have your say in the comments.