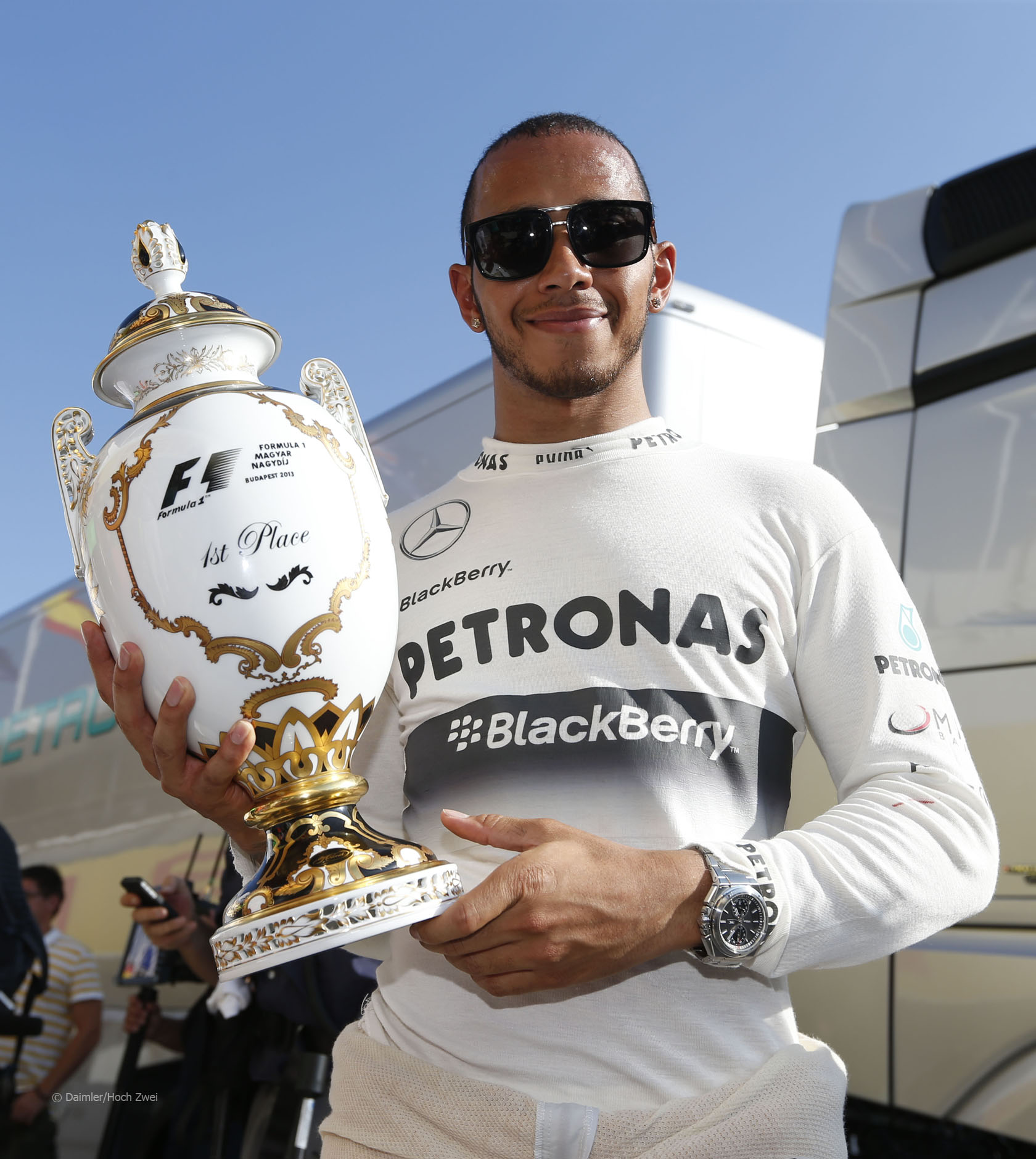 Lewis Hamilton scored his first victory as Mercedes driver in the Hungarian Grand Prix and got himself back into the drivers’ championship title race.

The 2008 world champion was a comfortable ten seconds clear at the flag as the challenge from Sebastian Vettel failed to materialise and Kimi Raikkonen used a two-stop strategy to claim second place.

The result of our poll was very clear: F1 Fanatic readers named Hamilton the Driver of the Weekend for the second time this year, with the two Lotus drivers in the top three once again.

After making a brilliant start from pole position Hamilton didn’t seem to be in trouble at any time during the race.

Key to Hamilton’s victory were overtakes on Jenson Button and Mark Webber which left him in a comfortable position at the end of the race.

The performance of the Mercedes in a race where they were expected to struggle underline their potential for the rest of the season.

Just has to be Hamilton, doesn?óÔéĽÔäót it? It?óÔéĽÔäós sometimes a bit unimaginative voting for the race winner but he didn?óÔéĽÔäót put a single foot wrong all weekend and scored a fully deserved win.

Second place would have been far less than he deserved this weekend. Great race, great win, great boost for a guy who?óÔéĽÔäós going through some tough times.
Lewis McMurray?é?á(@Celicadion23)

Hamilton for me. Great lap in qualifying, and perfect in the race. Very good start, good pace, good management of the tyres, didn?óÔéĽÔäót lose time in traffic, nice overtaking moves as well and a well deserved win.
The_Sigman?é?á(@Sigman1998)

That was one of Hamilton’s best grands prix of his whole career. Didn?óÔéĽÔäót do anything wrong and was so relentless and driven to win. Get those tyres working and Hamilton is a monster.
Stowe Gregory?é?á(@Stowe07)

Raikkonen recovered well after starting sixth on the grid?é?áwith a calculated driving and two-stop strategy that proved to be the right choice. Never looked likely to lose his second place to Vettel in the closing stages.

I voted for Raikkonen because of how he drove his final stint,?é?ákeeping Vettel behind him cleanly and fairly. Defence is a very important aspect of driving in the DRS era, and Raikkonen is a master of it. Starting in sixth and finishing second was also impressive.
Ferrox Glideh?é?á(@ferrox-glideh)

I voted for Raikkonen. Pity he doesn?óÔéĽÔäót have a stronger car in qualifying but he is always up there in the front during the races and this is why he keeps himself in the championship hunt.
@Osvaldas31

Underperformed in qualifying but it wasn’t entirely his own fault, the new tyres really hurt him in single-lap pace due to the tricky nature of E21 (and probably his driving style that requires full co-operation from the front of the car).

On Sunday he was simply the best driver out there, couldn?óÔéĽÔäót have done a better job with what he was given. I don’t know if he could’ve challenged for the win had his starting position been better but either way, he’s currently driving like a world champion.
@Tmekt

Had a good day on Saturday being quicker than his team mate securing a good place in the grid. His aggression on the track didn’t always serve him well on race day – a penalty for colliding with Button while overtaking him seemed an inevitability. He also collected a drive through penalty after a bold overtaking move on Massa in which he unfortunate put all four wheels outside the track.

Romain Grosjean had an awesome weekend. He looked fast always and beat Raikkonen in qualifying, had a great race with great overtakes and just one small error, when he tapped Button. His penalty was harsh in that he deserved no penalty at all, and the error I mentioned before is so small I?óÔéĽÔäód feel guilty if I didn?óÔéĽÔäót give him my vote for this.
@Fixy

20 comments on “Hamilton takes second Driver of the Weekend win”