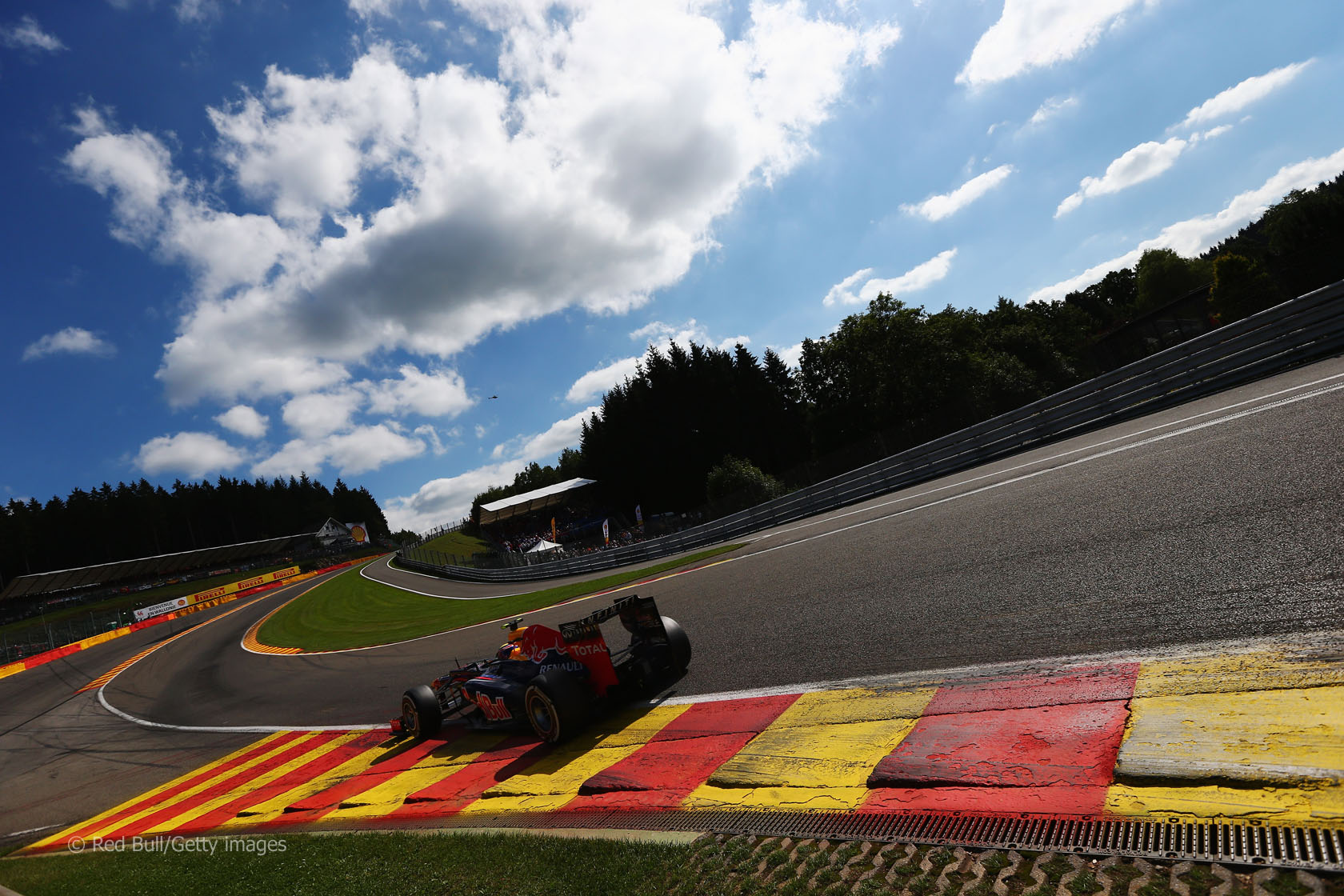 The spirit of real racing is alive at Spa-Francorchamps. This is a circuit of wickedly fast corners, daunting rises and crests, and a capricious climate waiting to catch the drivers out.

Two years ago the severity of the challenge posed by Spa proved too much for the tyres on some cars, which showed signs of damage under the high loads. The two Red Bulls and Lewis Hamilton’s McLaren were among those affected.

Fortunately the race, during the first year of Pirelli’s stint as official F1 tyre supplier, passed without incident. And there was no repeat of the problems last year.

However the spate of failures seen at Silverstone this year has raised concerns about tyre safety again. This will be the second race with the revised tyres which Pirelli introduced in Hungary.

“I think for this weekend coming all the teams will be on a reasonable degree of alert,” said McLaren managing director Jonathan Neale.

He indicated that some teams had been running their tyres outside Pirelli’s recommended camber and pressure limits, which also contributed to the problems in 2011: “There are high loads at Spa and Pirelli are being rightly cautious about making sure that the teams operate within certain restrictive windows on tyre pressure and we’re supportive of that process.”

As usual the teams will have the hardest compounds available – hard and medium – for this race.

In a change from last year a second DRS zone has been added on the start/finish straight. A lot of overtaking seemed to take place in the DRS zone last year, so this may serve to make it even easier. But it’s doubtful whether one DRS zone is needed on a track which offers as many long straights as Spa, let alone two.

When compared to the featureless cookie-cutter dross which has appeared on the calendar in recent year’s it’s no surprise the drivers talk about this track with genuine enthusiasm and affection.

It’s here the second half of the contest for the 2013 world championships will begin. Sebastian Vettel stole a march on his rivals in the first half: now the question is whether any of them can emerge from the chasing pack and put him under pressure over the remaining nine rounds.

Vettel has been on the podium at three of the last four Belgian Grands Prix: the exception was 2010, when he collided with Button. That incident highlighted a defining trait of the recent generation of Red Bulls: while they revel in Spa’s high-speed corners, their straight-line speed deficiency presents problems for overtaking.

At Spa Vettel usually tries to solve that problem by getting a quick run out of Blanchimont and passing into the chicane. That’s exactly what he was trying to do in 2010 when it all went wrong, but during an excellent run to second last year he showed he’d finally nailed it. Don’t rule out a repeat of his 2011 win. Ferrari head into the weekend determined to bounce back from a pair of disappointing races before the summer break. Team principal Stefano Domenicali dismissed speculation about future changes to their driver line-up, whether the subject of it is Fernando Alonso or the still-underperforming Felipe Massa: “We have spelt it out many times before: the driver topic is definitely not a priority,” he said.

“What counts is to give them the best possible chance of finishing ahead of everyone and, in order to succeed, each and every one of us must do our job to the best of our ability on all levels. If they have a winning car in their hands, then I am convinced they will know how to win with it. ”

Before the break Jenson Button said he was confident about how the team would perform at Spa and even raised the possibility of getting the MP4-28 onto the podium for the first time. That may prove a little optimistic but Hungary showed the team have finally started to make progress with their car. Spa expert Kimi Raikkonen is hunting is fifth victory on the Belgian track. The E21 has been in great shape in recent races and if they can get their straight-line speed boosting Drag Reduction Device working it could be enough to tip the balance in his favour.

Team mate Romain Grosjean merely needs to complete the first lap without hitting anyone to improve on his Spa record. As well as triggering a notorious crash last year which saw him receive a one-race ban, he was also involved in a crash at the start of the 2009 race.

This race will give a further sign whether Mercedes can emerge as credible rivals to Red Bull in the second half of the season. The raw speed of the W04 is not in doubt after seven pole positions, the question now is whether Lewis Hamilton or Nico Rosberg can consistently take points off the RB9s.

Reliability is also a question mark after Rosberg’s third breakdown last time out in Hungary.

Life with the C32 has been difficult so far for Sauber but they are making progress. However it has not always been easy to see because of other setbacks, such as Esteban Gutierrez missing third practice in Hungary.

“Obviously qualifying in Hungary was not good, because of the time we lost in FP3,” he said, “but I think we can manage to get into the position we were expecting, which is around P10 in Spa-Francorchamps.” Paul di Resta believes “missed opportunities” has been the cause of Force India’s sudden halt in points-gathering.

But in Hungary the car simply seemed to lack pace – and the recent changes to the tyres are an obvious suspect. Force India have usually been competitive at Spa so if they turn out to be nowhere this weekend it will be hard to avoid the conclusion that some of the VJM06’s performance has gone missing.

Scoring their first point of the season in Hungary was a relief and Valtteri Bottas believes it was a sign of things to come: “We have shown some improvements in race pace over the past few races and we know we are heading in the right direction.”

Toro Rosso increasingly seem to be isolated in seventh position in the constructors’ championship, not picking up points at a quick enough rate to catch Force India and McLaren, yet not under any pressure from Sauber.

The chief point of interest for them is whether driver Daniel Ricciardo will get the call-up to race for Red Bull next year amid conflicting reports over whether they are still in negotiations with Raikkonen.

Belgium’s round of the world championship serves as a surrogate home race for Giedo van der Garde, who had his most impressive showing of the season so far in Hungary.

“I’ve been excited about racing in F1 at Spa ever since the start of the season, actually probably for all my life,” he said. “As there isn?óÔéĽÔäót a Dutch Grand Prix these days the Belgian GP is the closest I have to a home race and I know there?óÔéĽÔäós going to be a lot of orange flags around the track.”

Marussia looked lost in Hungary where they were well off the pace of even the Caterhams. The team are anxious to hold onto their tenth place in the constructors’ championship but their closest rivals are poised to exploit any opportunity to take it off them.