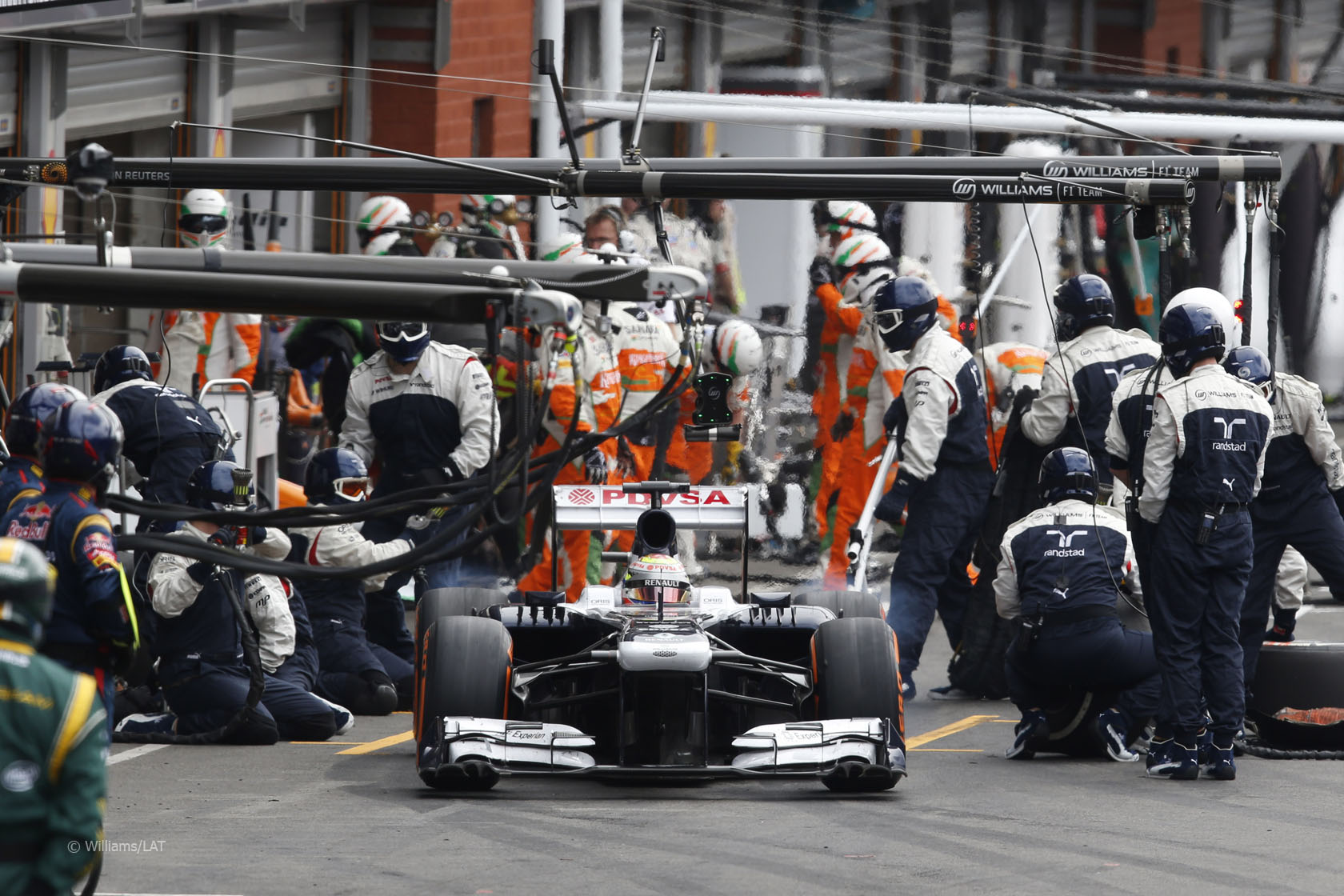 In the round-up: The FIA plans further changes to pit stop procedure to come into effect at the Singapore Grand Prix to reduce the chances of someone being struck by a loose wheel.

“A second device will now also retain the wheel in the event that it works loose having only just been engaged on the axle thread ?óÔéĽÔÇŁ as would happen if the nut is cross-threaded during a pit stop and the car accidentally released.”

“My campaign will be very much about the structure of the FIA, rather than about individuals. In my opinion it is not fit for purpose in the modern world.”

Martin Whitmarsh: “Racing has been a fantastic British success story but for some reason it’s still treated as a fairly frivolous activity and has not been taken seriously. So in a sense, for McLaren now to be taken seriously it had to be doing something other than all the great things we were doing in motor sport.”

“During the time before the restart Renault and Ferrari mechanics were seen with churns of petrol though no one seems to have seen them actually topping-up their cars. However, there were various protests and subsequently Renault were fined $5000 for having refuelling churns on the starting grid, which is strictly against the rules.”

Why Greenpeace’s protests at Spa are inexcusable (Autocar)

“This will make it less fun to go to the Grand Prix and this is where I feel that Greenpeace’s actions were inexcusable.”

Call me old fashioned, but this is what a circuit should look like… pic.twitter.com/SxGOmPC34J

Questions. Yes, David Ward was Max Mosley's "fixer" but he was a v clever operator in his own right. Most of the good FIA stuff came from DW

WORLD EXCLUSIVE – The first shot of our much talked about 'looong wheelbase E21' – Hairpin turns should be fun… #F1 pic.twitter.com/72KTYDQex6

Look at this beautiful V12 1971 BRM which won the Italian GP. pic.twitter.com/XPweJBsLUt

What I don?óÔéĽÔäót like about Todt is that we don’t hear much about him, which gives me a sneaky impression of him, like a politician that wants to do all his dealings behind closed doors.

For instance regarding the current issue over the tyre supplier for the next season. If he wants to bring in Michelin, he should have announced some kind of tender ages ago, instead of what he is doing now (which is waiting for Pirelli to despair and walk away?).
@Adrianmorse

Happy birthday to Mg and Galzo33!

A wet day in Belgium 15 years ago today produced one of the most chaotic races ever seen. It began with a huge pile-up that stopped the race and forced a restart (see video below).

Once the race got going again championship leader Mika Hakkinen retired at the first corner. Michael Schumacher took the lead but slammed into the other McLaren of David Coulthard while lapping it.

Later on Giancarlo Fisichella had a similar collision with with Shinji Nakano. Out of the carnage, in which all the drivers were fortunate to escape injury, the Jordan duo emerged to score the team’s first win and one two.