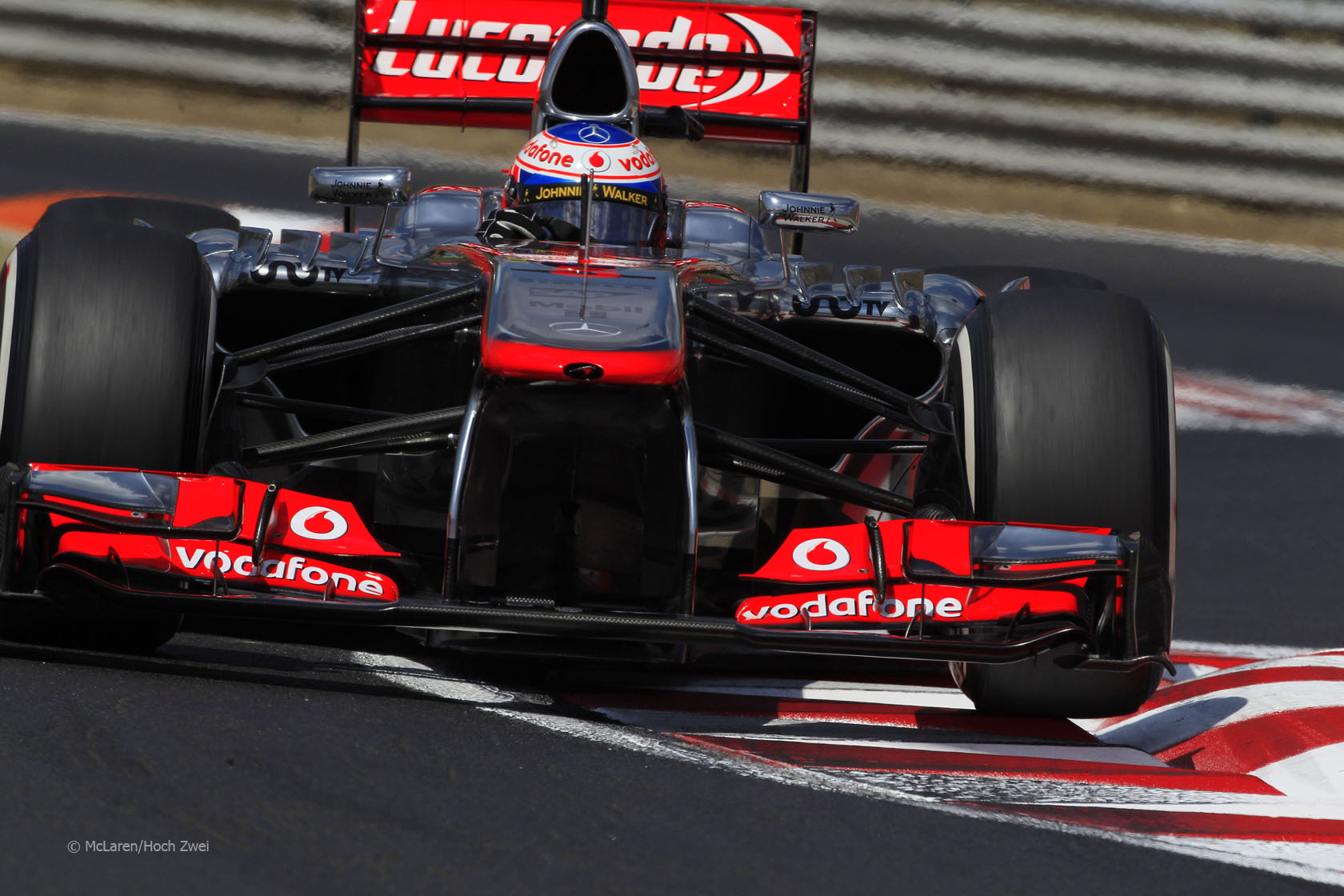 In the round-up: Jenson Button will extend his McLaren contract “within weeks”.

Button to sign new McLaren deal ‘within weeks’ (The Telegraph)

“Jenson Button has reiterated his desire to stay at McLaren, despite the team?óŌé¼Ōäós current woes, insisting that he will sign a contract for next year within weeks and adding that he would like to stay on for 2015 when McLaren?óŌé¼Ōäós new engine partnership with Honda kicks in.”

Sebastian Vettel: I can deal with being unpopular but Brits booing me wasn’t fair (Daily Mail)

“I didn’t understand it. I had not done anything to make them do it. I went up on to the stage later for the post-race concert and got booed again. I took my camera out and said, ‘If you are going to boo me at least do it properly’. I tried to make a laugh out of it.” Team principal Monisha Kaltenborn: “We are working on putting together the testing programme for him because you are allowed to test with an older car. We have more or less finalised the dates, we just have to look at certain availabilities.”

“I know how good the racetrack is. Obviously they need to rebuild it but there is time enough. I really hope for the good of the sport and my country that it happens.”

“If you look at my brake pressure compared to Nico [Rosberg’s], who’s much more comfortable with it, they’re similar, but if you look over the past seven years my brake pressure was way more than Jenson’s, way more than Heikki [Kovalainen’s] and it was always more than Fernando [Alonso’s]. That’s the different that I see this year but we are just trying to make improvements on it and I am doing the best I can with it.”

Domenicali not ruling out Kimi (Sky)

“Asked in an interview with Sky Sports News reporter Rachel Brookes on Thursday ahead of Ferrari’s home Italian GP if they would consider re-hiring Raikkonen one day, Domenicali replied ‘why not?'”

“Supposedly Lewis (Hamilton) is the quickest man on the grid, but I scored more points over the three years we were team mates, so I obviously must be doing something right. I don?óŌé¼Ōäót analyse it, I just go about my racing the way I feel is correct.” “It is thought an electrical fault sparked the blaze in the server room in the early hours.”

“Everyone keeps themselves to themselves, they don’t shout too loud outside the team, but the passion and the fire in people’s bellies here to succeed is as big as anywhere in Formula One.”

Tourism and sports minister Somsak Phurisrisak: “If we can’t find a venue outside greater Bangkok, then the plan should be cancelled.”

Daniel Bruhl: Rush, Niki Lauda and me (The Guardian)

“The first night, [Lauda] was with his wife, and by coincidence [his ex-wife] Marlene was flying into Vienna. He said to me: ‘Well, have dinner with us tonight, my new wife and my ex-wife, and you’re gonna see it’s more explosive than a Formula One race.'”

“In ?óŌé¼Ōäó94, [Jean] Alesi, still wearing his overalls, jumped directly aboard an Alfa 164 and roared at unabated speed to his French Riviera home. An emotional man, fuelled by adulatory adrenalin and launched by sudden, disorientating disappointment, he blindly ignored his private jet parked, ready and waiting, at Malpensa.”

“The best line is so important that should a driver be slightly off line in a corner he can lose a minimum of a tenth of a second, which, when considering there could be a dozen corners or more on a single lap, it can easily add up to the loss of a second per lap.”

Circuit of the Americas’ president and CEO Steve Sexton: “Our goal is to educate fans. F1 race cars are like aeroplanes on wheels ?óŌé¼ŌĒŲ they go from zero to 100 miles per hour in five seconds.”

Found this one today. Shanghai 2006. pic.twitter.com/LvyEOsYvIZ

I've driven the proposed NJ F1 layout and it is completely unfeasible. I'm not in the least bit surprised it isn't on the 2014 calendar

Marsianwalrus likes the look of the draft 2014 F1 calendar:

Looks to me like the best F1 calendar for at least ten years ?óŌé¼ŌĒ£ Mexico (providing they don?óŌé¼Ōäót mess with Autodromo Hermanos Rodriguez too much) and the Red Bull Ring are both fantastic tracks, and Russia has the potential to be at least good.

Without Bahrain and with New Jersey, the calendar would look perfect, but I?óŌé¼Ōäóll take this one all the same.
Marsianwalrus (@Einariliyev)

Happy birthday to Baldry 888 and Charlie!

Clay Regazzoni took a subdued first grand prix victory at Monza today in 1970, the day after Jochen Rindt had been killed during qualifying:

Here’s the start of the race which was the penultimate running of the race on a chicane-less Monza: